I have a fairly sedate start to Monday morning as the bus is only leaving mid-morning and I'm all packed from the night before. I enjoy breakfast with Pat, Brian and John before grabbing a few emails in the lobby and sorting out my small wheelie bag and a rucksack for the trip to Ishikawa.

I checked out of the room and stowed my two big bags filled with puzzles and the odd t-shirt, in the bag room before sitting down in the lobby to scribble some notes of the day before's adventures... but I kept having to get up and say goodbye to someone or chat to someone else so I decide the notes can wait, and they do until I'm on the bus to Haneda airport.

In spite of a pretty serious traffic jam, we get to the airport in time to collect our boarding passes, check our baggage and get through security ... and about 15 minutes later our flight is called and we're off to Komatsu airport. While we were waiting for the flight I was lurking around the gate area when a kindly gentleman offered me a seat and pointed at my IPP badge - "Ah, IPP" he said, "me too" and pulled out his badge - and then introduced himself as Takayuki Yoshigahara, Nob's brother... :-)

We're met at Komatsu airport by our friendly guide and driven to our hotel where we have the rest of the day to ourselves. I duly wander off into town with my camera and find the Rothstein brothers photographing and recording the sights and sounds of a wonderfully peaceful shrine in the middle of the bustling city. We wander up to the castle complex on the hill and while we're exploring and taking pictures I manage to stumble and tweak both of my feet, instantly turning me in a hobbling freak!

Gritting my teeth on the way back down the hill I decide I'm going to need some pain-killers so we head for a convenience store but have no luck there, so Mark offers me a bottle of Ibuprofen and some dosage advice (I'm well beyond being polite and refusing at that stage!) and a short while later the three of us head out in search of some food.

Although we failed to find the restaurant we thought we were looking for, Brett secures a recommendation from a local hotel and we head off to that one instead - where we get a private room and some superb sushi before braving the rain and dashing / hobbling from awning to awning back to the hotel.

Next morning my foot is well and truly throbbing and I make sure to take my pain-killers regularly all day. After breakfast with Stan we board the bus for the short drive out of Kanazawa to the Ohno Karakuri Museum.

At the Karakuri Museum we're treated to a demonstration of a couple of antique automata, including a tea-serving doll that delivers a cup of tea across a tatami mat and then turns around and returns for a refill after the tea has been drunk, and a tumbling acrobat powered by gravity and a little bit of Hg.

The exhibition includes some stunning model ships - not really my thing, but you can't help but be impressed by these models - demonstrations of some unusual linkages and a large number of Karakuri puzzle boxes, all there to be played with. A couple of us spent some time on a pair of cabinets with a number of hidden compartments that managed to keep their secrets in the face of several serious puzzlers' attempts.

From there we went to JAIST to visit the relatively new Nob Yoshigahara collection and gallery. The gallery is gorgeous with the shelving all constructed of N-pentominoes in such a way that if you squashed the shelving units into one corner they would all fit neatly together and form a  solid cuboid. (The architect used Burr Tools to design them!)

Across the corridor the main guts of the collection is housed in a large archive room filled with hundreds of plastic boxes safely storing the ten thousand-odd puzzles in the collection. The back wall of the archive room is given over to a set of glass cabinets displaying a couple of special puzzles, including the Cooksey Maze that had inspired Oskar several decades earlier.

Front and centre in the main gallery, as you walk in the entrance is a single shelf with a puzzle jug given to Nob by James Dalgety on the occasion of the 9th IPP in  Tokyo. (It was nice to be able to show James some pics of that when I was back in Blighty.) There were literally hundreds of priceless puzzles in the display and a couple that stood out for me were the collection of Alan Boardman creations (complete with magnifying glasses!) and a set of Chinese Rings with 36 rings on it...!

The playroom next door to the gallery was well stocked with contemporary puzzles and they got a good going over while we were there...

On the way back into town we stopped off at a shopping mall for some lunch, which was rice covered in an omelette and drowned in a yummy sauce - no idea what is was called, but it was good and I'll definitely keep an eye out for that in the future!

Back on the bus again for a short drive to the Ninja Temple (Sorry Gill, the turtles weren't in.) so-called because of its many hidden doors / hiding places, pit falls and hidden rooms. (The temple literally is the ninja in this case!)  We were taken on a fascinating tour of the building through the warren of rooms - the layout is that convoluted that they're able to run five tours concurrently and you don't often come across another tour group along the way...

We did a little craft-shopping on the way back to the bus before heading off to the 21st Century Modern Art Museum where we wandered around and took a few pics of the rather interesting exhibits - including a swimming pool that allows punters to wander around underwater - can you recognise the well-known puzzler in the pool?

Headed (OK, hobbled!) back to the hotel for a cold bath (intentionally!) before the JAIST guys hosted us for a dinner and party in the hotel, including a short speech from the University's VP on how he got to know Nob. There followed plenty playing of puzzles including the Elusive "E" that amused several people (and I found homes for the two spare copies I'd taken along - result!) and Coverup that kept most folks puzzled for quite a while - my favourite memory of the evening was watching Nob's brother playing with Neil's copy of Coverup. (Thanks Neil - I've got a huge amount of mileage out of that puzzle!)

Hwei Hwa was teaching Oskar about Portal on his laptop with Oskar giving directions and Hwei Hwa navigating through the various levels... Oskar was doing pretty well and had got himself past level 13 when I left them...

Next morning was another leisurely breakfast (spot the pattern here yet?) before heading out to the airport on the bus - I had a lovely chat with Stan Isaacs about mathematics, insurance and Unix - and about the joys of living through the birth of the computer age.

The short flight back to Haneda went like clockwork and after taking the Friendly Limousine Bus back to Narita, I was checking back into my hotel again - getting the room two doors down from the one I'd had the week before. 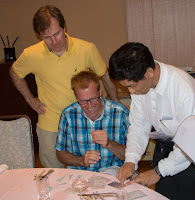 I rearranged my baggage so that I had one big case all packed up and ready to go before heading out to the mall in search of washi tape  and some food ... success on the former and Udon noodles on the latter - followed by an ice cream cone before heading back to the hotel for an early night - virtually guaranteed since all of the English channels are subscription and channel surfing when you have no idea what they're saying isn't all that interesting...

After breakfast with Pantazis and Afroditi (surprised to find them still in the hotel as they weren't on the tour) I mooched around a bit in the lobby and wandered off to the mall for a few hours - my earlier plans of heading into Tokyo being scuppered by the incessant need to hobble everywhere.

By Friday morning I was pretty organised and as I was closing up one of the large cases for the final time it suffered a closure malfunction - the zip broke ... leaving me with having to get out of the hotel in about half an hour to catch my flight and having one large useless puzzle-filled case on my bed. Thank heavens for the hotel's lobby shop and its stock of large (if not all that cheap!) suitcases (I guess others have suffered the same fate in the past!) - so I managed to repack everything in my shiny new case and get out to the airport in good time for my flight back to Britain - which thanks to BA was an absolute treat!