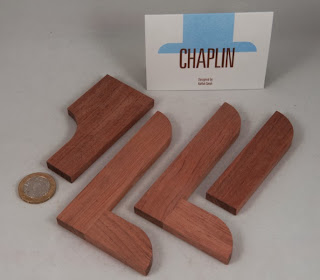 I first met Kohfuh Satoh in Washington DC while I was wandering around at the puzzle party – he’d recognised my name tag and tied it to the blog and we ended up chatting a bit and swapping business cards – his had the fold lines for making up a lotus flower on them and I now have a cute folded lotus in one of my puzzle cabinets. :- )


I hadn’t come across many of his puzzle designs before Washington, but I really enjoyed his entry into the Design Competition that year – so I was delighted when I found a bunch of his designs available for sale at Torito in Japan.


Your task is to make the shape of a bowler hat with the four simple pieces provided. It’s not super-difficult as a puzzle, but I found it really satisfying – there’s a lovely little trap to sucker you into doing the wrong thing, but once you’ve avoided that, it shouldn’t take you too long to solve. 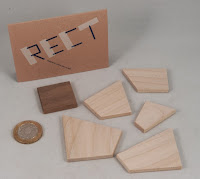 “Rect” is a set of five light wooden quadrilaterals and a dark wooden square - your task is to make a solid rectangle with all of the pieces, and then remove the odd coloured square and repeat the process.


One of the things I really like about Kohfuh’s puzzles are his packaging – he clearly puts a lot of effort into getting the packaging spot-on – this puzzle comes in a clear acrylic box, but he’s also included a Ziploc bag inside for keeping things together if you don’t hang onto the box … nice touch!

The puzzle consists of a pair of flexible plastic sheets with a pair of worms printed on them – and you task is to arrange the sheets such that none of the worms are visible at all on either side of the resulting arrangement. You’re allowed to bend the pieces, but not fold them. They’re fun to play with and there are a couple of false solutions that leave bits of worm peeking out from the edges…

The packaging is elegant and simple – literally just a square sheet of paper with the plastic sheets inside at an offset angle with the corners then successively folded in on the package and the final corner tucked inside the first fold. I’m probably weird, but I think that the packaging is really clever!


“Smart Cookie” is probably the toughest of these Kohfuh puzzles. It consists of a set of three two-dimensional wooden pieces made up of rhombuses (rhombi?) in two colours. Your goal is to arrange the three pieces so that you have created the same shape in both light and dark woods at the same time. 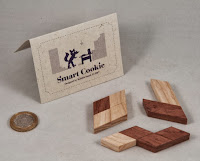 Mercifully the fronts and backs are the same colour which reduces the permutations a bit, although the shapes and less-than-orthogonal nature of the pieces makes it pretty darn elusive!

So elusive in fact that I had gotten nowhere on it, despite several attempts and I’d probably still be working on it to this day if Louis hadn’t solved it on the breakfast table during his last visit … and having seen the answer, I’m not ashamed and not surprised I hadn’t solved it – it is  cracker!


The final puzzle in this group was Nick Baxter’s IPP33 Exchange Puzzle called “Fishy!”. It consists of a set of oddly (and differently) shaped acrylic fish (use your imagination!) and you are asked to separate them into two schools of fish and then build a pair of similar (in the mathematical sense!) shapes with the two groups. 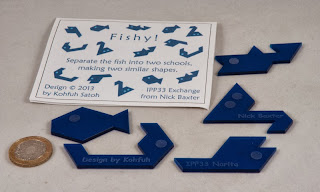 When I first started playing with puzzle it’s fair to say that I had no strategy and no idea of where I might be heading – I just started experimenting randomly with fitting the little fishies together, and boy do they go together in a lot of different ways!


I’d just about started to worry about how the heck I was going to recognise a pair of structures as being similar, when I noticed something interesting and followed it through to its natural conclusion – at which point I realised that it was going to be thoroughly obvious when this puzzle was solved – I like that about good puzzles!