Truth be told, I came back from Japan with piles of puzzles… so there is no way I’m going to be able to blog my way through all of them – the best I can possibly do is tell you about some of the highlights… 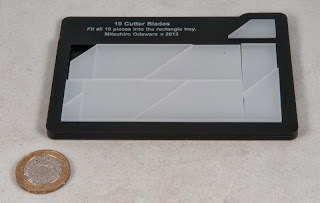 Today I have three tray-packing puzzles for you… selected for three very different reasons!

10 Cutter Blades was Mitsuhiro Odawara’s entry to the Nob Yoshigahara Puzzle Design Competition this year. I’d had a look at the entries on John Rausch’s website before going over to IPP so I recognised it when I spotted a copy in Mine’s stall outside Izumiya in Hakone, and picked up a copy for myself.

This is one of those straight-forward packing puzzles with a set of 10 blade-shaped pieces of varying sizes to be packed in a rectangular tray… helpfully there’s a space to hold one of the pieces on the side of the tray.

The start position has a reasonable amount of slop in it, but nowhere near enough to fit an extra piece into the tray. The shapes are really interesting because there are tons of ways of combining them into regular-looking shapes and it’s very tempting to use those as the basis for a solution.

The solution is a long way from anything that I’d envisaged along the way and almost seems to be entirely void of any form of symmetry, in spite of the pieces lending themselves toward symmetrical combinations and there being five pairs of identical pieces. 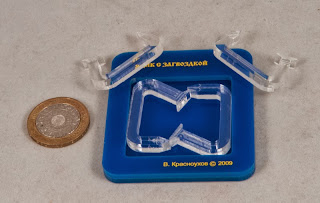 I bought a copy of Four Bent Nails from Vladimir Krasnoukhov at Sunday’s Puzzle Party. It is an acrylic packing puzzle – and is almost the antithesis of 10 Cutter Blades as a packing puzzle. This one has four identical bent nails cut out of clear acrylic that need to be placed in the square tray.

It might be an old, well-used idea, but it’s nicely executed and a fun little puzzle to hand around to folks who are reasonably new to puzzling as it looks totally impossible at the start, but once you start experimenting you can develop an idea or two and solve it in a few minutes… of course if you insist on trying the wrong things over and over, you can get a lot more enjoyment out of this cute little puzzle.

I ended up spending an awfully long time getting to know Triangle Eyes by Mine – I’d picked up a copy from him in Hakone and it pretty much became my go-to puzzle of choice for the remainder of the trip. It’s a great challenge, it’s really compact and it’s brilliant for passing around for folks to have a bash at. 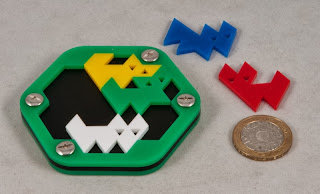 You get a double-sided tray with different-shaped openings on each side and a set of multi-coloured cats, with triangles for eyes. Your first task is to pack all five cats into the hexagon-y-shaped side of the tray. There seems to be plenty of space for this, it’s just always in the wrong place –you either end up with a cat with a head that’s too big to fit in the last remaining hole, or a cat with a leg in the wrong place.

I must have spent literally hours solving the first side and really felt a sense of relief when I finally stumbled across the solution.

The challenge on the second side is to pack any four cats into the squashed-hexagon-y-shaped tray. You have all the same problems that you had with the first side (misbehaving malformed moggies) compounded by not knowing which of the cats to try and force into the tray… 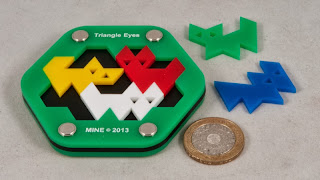 I spent quite a while on this one and by a stroke of luck (or genius?) I guessed which four were most likely to be in the solution and concentrated on them, until I managed to find the one and only way to pack them all into the tray.