A pair of Jack’s

[Let’s see how many poker searches pick this one up!]

Back at DCD a couple of weeks ago I picked up a lovely pair of Jack Krijnen’s little masterpieces.

Elevenses II reminded me a little of one of Bill Cutler’s Wausau series of burrs in that it has different numbers of pieces in each axis so it looks a bit out of the ordinary right from the start. This one’s a 2*3*4 burr and Jack has rather helpfully picked three different coloured woods (walnut, padauk and bubinga –I think bilinga - Thanks for correcting me, Jack!), for the three axes – which makes trying to work out where the pieces might need to go, a whole lot easier!

Easier, but certainly not simple!

Taking it apart is reasonably straight-forward, albeit quite interesting! The first move is a bit unusual and then you find yourself in a series of moves as each move allows successively more and more movement until the first piece is released at move 9 … letting you see Jack’s signature inside the remaining structure –neat touch! :-)

Reassembly is far more of a challenge (ain’t that always the case with burrs?)! Using the colours you can work out where in the final structure the various bits need to be, and remembering that it took you 9 moves to release the first piece you know that you’re going to need to do quite a bit of manipulation before you can insert the last piece … at least it’s a reasonable challenge for relative burr-neophytes like myself… Jack may well have other views!

[The first Elevenses had the same shape (2*3*4) and required 11 moves to release the first piece, but had 4 solutions… this version has a unique level 9 solution, but retains the name, but I reckon it makes a good tea-time puzzle!]

Framed! caught my eye as soon as I saw it – it is gorgeous: an 18-piece padauk burr captured in a zebrano frame. It’s one of Jack’s relatively recent designs (2013) and it packs a serious sucker punch! 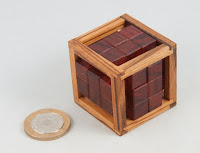 It’s “only” a level 3 burr – you move two pieces on two of the axes in order to release a third piece on the remaining axis … and then the two pieces you’ve already moved come out successively. “Simples!” to quote a meerkat.

So five moves in and you’ve removed 3 pieces already … well, it turns out you’ve just released a sort of 3-axis key piece … and now it gets interesting… from there you need another 11 moves to get the next piece out, and in spite of having a fair amount of space to play with (having already removed three pieces!) you’ll find that the pieces cannot be coaxed out until the right combination of moves has been completed. And that series of moves has pieces moving around all over the show and you may well find yourself inadvertently allowing a piece to move past where you actually wanted it to be, blocking any further progress… 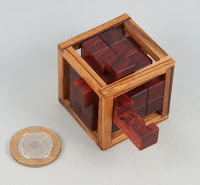 Reassembly? If you’re an amateur like me you’re going to find it tricky enough just trying to get it back together using Burr Tools – I cannot imagine trying to do it without… I’ll leave that to the experts out there… you know who you are…