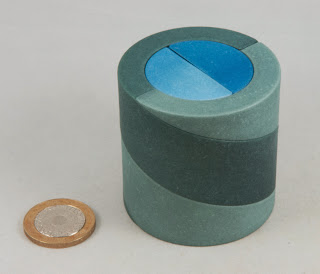 If you’ve been following this year’s puzzle news you must have spotted that Derek Bosch won the prestigious Jury Grand Prize at this year’s Nob Yoshigahara Puzzle Design Competition with his Helical Burr.

I’d heard some rumours of something interesting in the works and then seen a late prototype at one of our puzzle gatherings and it drew quite a few admiring comments from those who had a play with it…I didn’t get to spend much time on it before it headed up to its new owner, but it’s cylindrical shapes definitely sets it apart in burr-world.

A while later in Japan I had a bit of a play with the copy in the Design Competition, but as luck would have it, someone before me had left it in bits, so I had a half-hearted attempt at putting it back together again and failed miserably so I quickly moved along to something simpler in order to restore my sense of self-worth!

At the end of IPP, sitting with a bunch of Renegades there was a really loud cheer when Derek’s design was announced as the Grand Prize Winner at the awards dinner – one of “our guys” (not sure why they let me associate with them!) had won one of the big prizes, again! Cue all manner of celebrations that could only have been a little bigger had Derek actually been in the room at the time.

Back home a little while after IPP and Derek let us know that he was going to make up a few and was taking orders, so Gill decided to get me one for my birthday, and unbeknown to her at the time, I snuck in an order for one of Derek’s Rhombic Maze Burrs as well, but that’s a whole other blog entry… 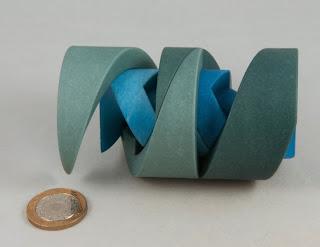 When I received my copy I hadn’t really had much of a chance to play with one yet, so I was really starting from scratch as it were. The puzzle is 3D printed by Shapeways and dyed by Derek. It consists of 4 different coloured pieces that make up an inner core of two interlocking pieces and an outer frame. You can see from the outside that the frame will unscrew into two pieces, and your first temptation may well be to try and unscrew them…

When I started playing with the burr, my first thought was that it was rather stiff and the pieces were very tight… so I kept at it and hoped that it would loosen up with a little playing, but I wasn’t getting much movement at all. I started paying more careful attention to the way that I was gripping the pieces to make sure that I wasn’t blocking my movements, and that helped a little, unscrewing the outer case a little, but then, nothing…

Realising that trying the same things over and over again weren’t yielding any more useful results (I’m sure there’s a quotation about that somewhere!) I switched tack and tried something else. And all of a sudden, I had movement of a different and rather unexpected type. Finding the next move didn’t take quite as long as the first, and from there on progress was a bit better, until, at around 11 moves the first piece is removed.

Separating the pieces helps you understand why the pieces behave the way they do, with strange-shaped protuberances inside the frame pieces to both obstruct the inner pieces and force them to turn in a particular direction… quite ingenious and how the heck Derek designed it, I have no idea! 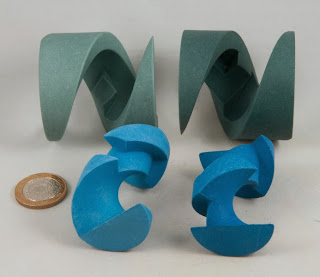 I find playing with it a lot of fun and have found myself going through the movements of opening and closing it stacks of times because it’s fun to fiddle with! There’s a lovely little bit of puzzle choreography at play as the four pieces interact in a series of movements that take it from a compact cylinder to an extended, open structure with all its innards on display – just before it releases the first piece and the rest come apart pretty simply.

Definitely a puzzle with plenty of repeat playability – and it’s a pretty cheap form of therapy!