Yikes! Midlands Puzzle Party is a teenager… Thirteen! Not bad for a couple of chaps who decided to get together and play with puzzles a few years ago… 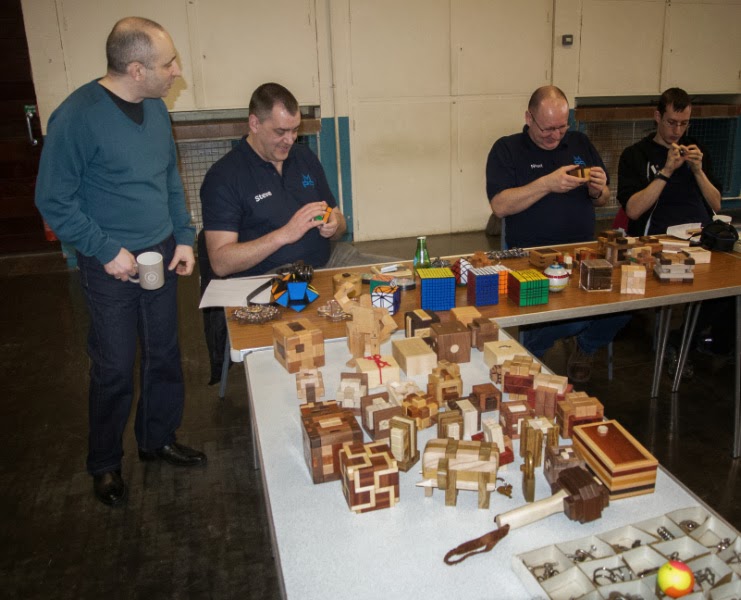 Right, so the weather in the UK has been pretty foul lately, so our visitors from further afield had the joys of flying into some rather unpleasant weather on their way to MPP13. Louis described the flight into Birmingham as “interesting” and “a bit bumpy” and Isabel and Taus had the joys of a couple of go-arounds before their pilot managed to put it down on the black stuff in London … and then travelling to Warwick on the Saturday, Shane ended up spending 5 hours in traffic on the M40 – and in spite of all that, 16 of us turned out for MPP13.


And it was good! 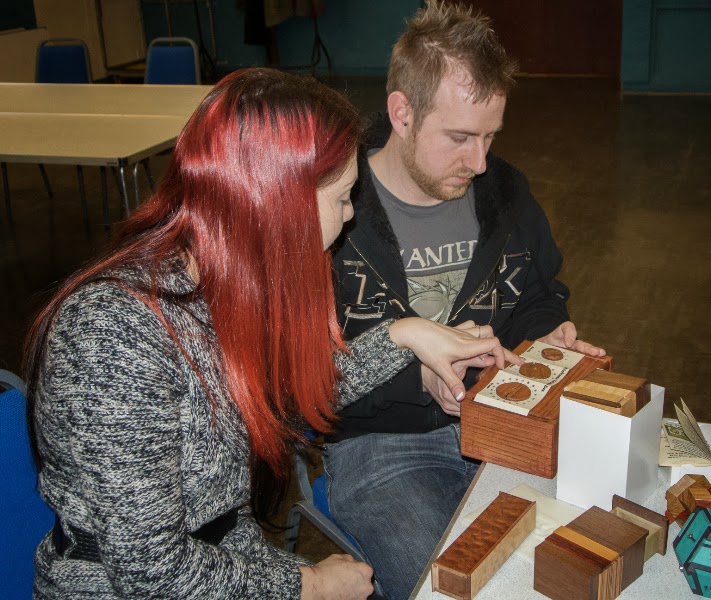 Louis had flown in the night before, as usual, so we spent a couple of hours chatting and puzzling. He’d brought over a new prototype of our potential exchange puzzle for IPP34 [I’m very chuffed that he’s agreed to be my exchange assistant this year!] and I was invited to have a go on it … now even though I was pretty sure I knew how the guts of the mechanism worked, it still took me a good 10-15 minutes to get it open – and he’d just tweaked a couple of things! We chatted about some ideas he had and some suggestions from Wil, and I suspect that it’s going to turn out rather nicely. Sometime after midnight I crashed, leaving Louis to solve some more puzzles and line them up, solved, on the desk in the study … it’s a ritual – and there are generally several things solved in that time that I’ve been unable to solve for ages!


After some breakfast the next morning we headed down to Warwick and found Nigel and Chris just about to head out. We’d only been at Nigel’s for a few minutes when the first wave of travellers from London arrived, so after we’d said hello to Taus and Isabel and Andy and Stephen, we all headed down the road to the hall … and fairly soon most of the gang was there, tables and chairs had been set up, kettle and coffee laid out and puzzles tipped out of plastic crates onto tables – and we’re ready for a full day’s puzzling! 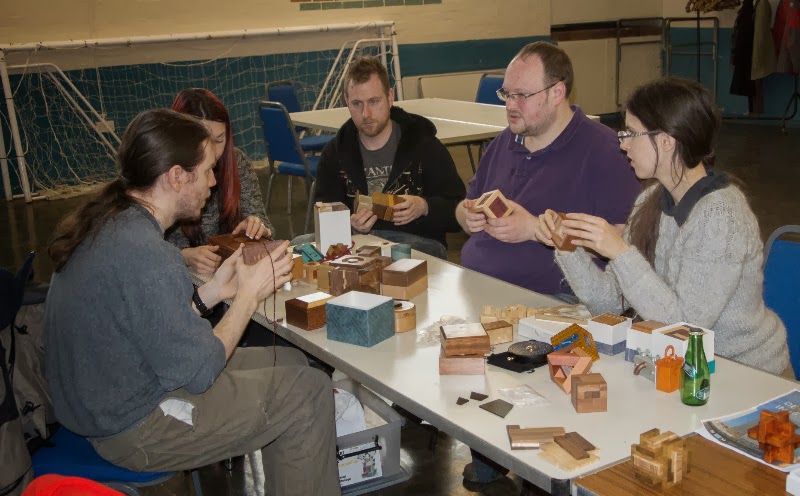 Steve had brought along a few totally bonkers puzzles that he’d printed – he’d supersized a set of Binary and Ternary Burrs, adding several “ring pieces” to the original designs and turning them into massively n-ary puzzles in the process… several folks may have fiddled around with them, most expressed some degree of lust for one (all rebuffed) – but, unsurprisingly, nobody actually solved one…


Steve had also brought along a few Mr Puzzle 2003 limited editions and I fiddled around with Criss Cross but I wasn’t brave enough to scramble the pieces and then try putting it back together again. I spent quite a while on A Cube with a Secret – it took ages to find anything that would move initially and I managed to get some sort of series of moves strung together that freed the first piece … and shortly after that, partially influenced by Steve saying he didn’t think he had a solution for it, discretion got the better of valour and I began retracing my steps to try and return it to the start position. That turned out to be a lot harder than I thought it would be and there were several moments of blind terror where I couldn’t get it to do what I wanted it to… but perseverance won out in the end and it was all locked up for the next victim… although I didn’t notice anyone else taking it apart…

Neil had sent over a copy of his exchange puzzle for some road-testing and after I’d had it for a couple of weeks and singularly failed to find a solution for it, I’d handed it over to Nigel a couple of weeks before MPP for his thoughts… he duly brought it along having at least found an assembly, albeit not a colour-coded one, so it was passed around to a few of the guys to have a bash at.

Louis duly took up the challenge (come to think of it I don’t think I’ve ever seen him refuse one!) and set about solving it, in about ten minutes flat! It would be a huge understatement to say that my gob had been well and truly smacked. Having spent blimmin' hours trying (and failing!) to solve it, I sat down and asked him how the heck he’d done that… so he scrambled the pieces and talked me through his logic, solving it right in front of me from scratch… Puzzle-solving-machine! [After MPP it went to Ali for him to have a bash at it and he duly reported via FaceBook that he’d solved it as well … so maybe it is just me that’s rubbish at this!] 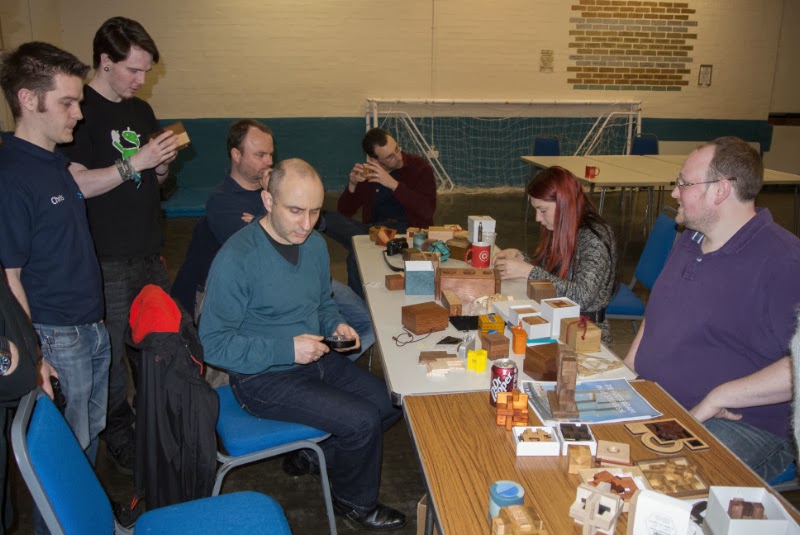 Stephen ended up doing duty as chief Tessarisis and Tarka trouble-shooter with several folks having brought their copies along to make sure that they were working properly – it looked like he ended up opening and closing all of them successfully, sadly depriving some puzzlers of a handy excuse that perhaps their puzzle was faulty…


A couple of the new Revomaze R2 puzzles showed up and some of us who don’t have one had a bit of a play around on one, but they’re not the sort of puzzles you can have a casual play with and get any enjoyment or progress out of, and having seen the maze plate, I’d imagine that it’ll be an absolute brute to map out, unless there’s a design “feature” that lets you bypass most of the tricky section … they do look nice though. 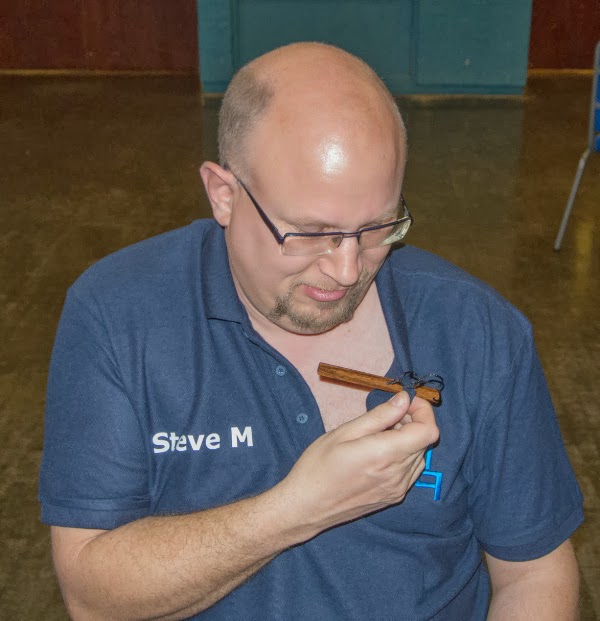 Kevin and I had both brought along our copies of Shane’s The Circle puzzle and quite a few of the guys had a go at one of them and I think most managed to open it … although I’m pretty sure they all opened my copy as Kevin’s had significantly tighter tolerances and as a result it gave a lot less of a clue as to what to do than mine does. The mechanism surprises everyone and most people ended up playing around with the mechanism when the puzzle was open to convince themselves of how it actually worked… it’s good! 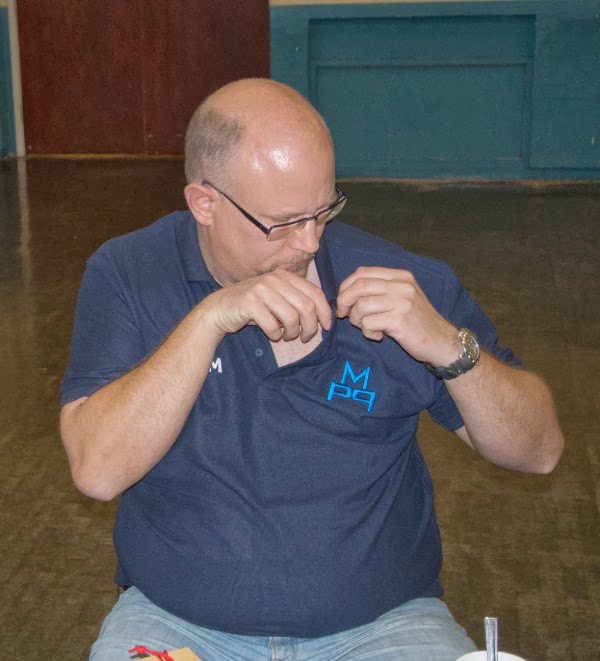 At one point Steve slipped into mischievous mode (I’m sure there’s an obvious remark, but I can’t think of it!) and introduced Stephen to the wonders of the buttonhole puzzle, by attaching it to the buttonhole on his new MPP polo shirt.
“Unfortunately” that made it rather awkward for Stephen to work on removing it as he had to crane his neck and pull on his shirt just to be able to see what he was doing … and it would be cruel and mean and horrible to make fun of his attempts to free himself so I shall say no more of it. 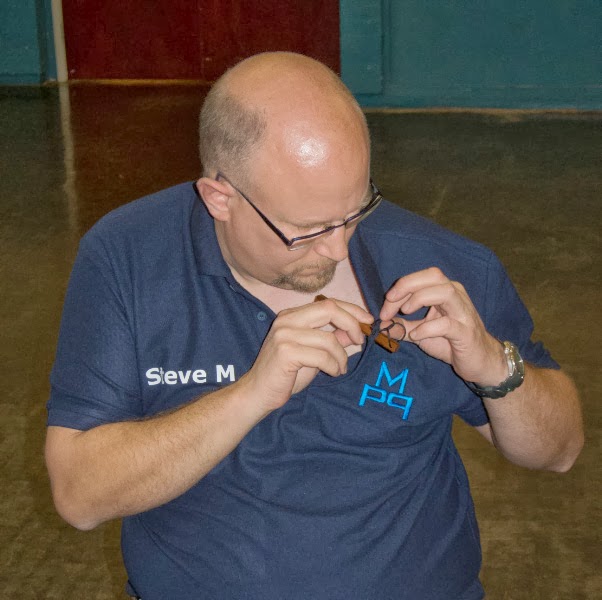 After he’d recovered from that ignominy he had a go on a Danlock that he hadn’t seen before and he and Andy ended up having a brilliant time trying various strategies along the way to solving it while receiving helpful chirps from the other side of the table – seeing puzzlers finding the various little “A-Ha!” moments along the way still puts a huge grin on my face.


Sophie taught a few of us the correct way to open Chris’ Kamei Parabox – Chris and I were quite happy that we knew how to open it, except we were totally wrong and the real solution is way more complicated than either of us thought it was – turned out we’d just been really lucky when we opened it… 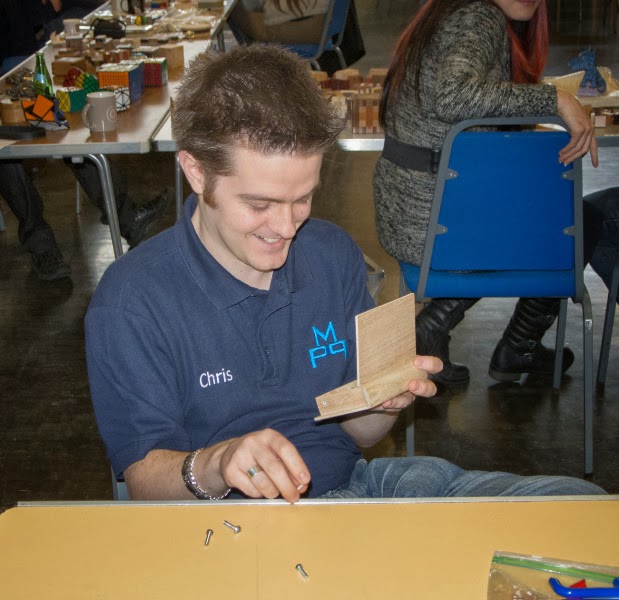 Louis and I took the opportunity to get some feedback on the prototype exchange puzzle and passed it around a couple of the regulars (carefully avoiding anyone who might actually be in the exchange, like that mischievous one!). Everyone managed to open it (good start!) and they all took more than a few minutes (also good!) – and everyone seemed to enjoy some of the “features” along the way (…grin…) and there were some really good suggestions for “improvements” (i.e. making it harder) – all of which suggests we’re off to a good start… (Thanks for the input, chaps!)


We vacated the hall at about 6pm and Louis and I headed back to my place for more puzzling [as luck would have it a couple of puzzling parcels had arrived while we were out!], a bit of dinner and yet more puzzling – including some longer discussions about the potential changes to the prototype exchange puzzle and some thoughts on what we might be able to put inside the box … I now have some work ahead of me!


Louis headed back to Eindhoven the next day, and the weather gods gave him a slightly more pleasant departure than his arrival had been – another fine puzzling weekend!
Posted by allard at 21:46