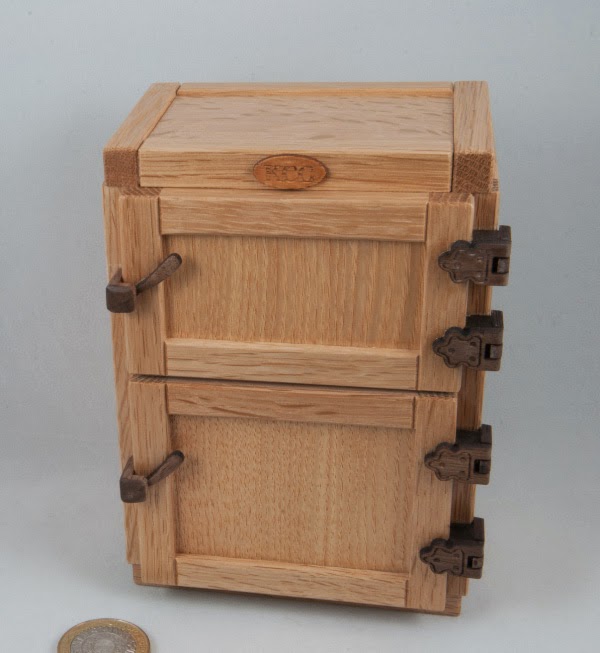 One of the great things about membership of the Karakuri club is that from time to time you get offered interesting puzzle boxes that they don’t make widely available. A little while back one of their updates arrived with details of a number of new puzzles themed around everyday objects – a few of them looked rather interesting so I put in an order and I’m delighted with the three boxes I ended up getting: two of them are incredibly cute and the third looks fantastic and it’s a cracking puzzle as well!


Tatsuo Miyamoto’s contribution was a dinky little box in the shape of a Refrigerator. It looks like a good, solid old-fashioned double door fridge, with sturdy hinges on one side and big latches on the other. Sadly the latches don’t seem to do an awful lot – and to be fair – it wouldn’t be much of a puzzle of they did!


A little experimentation leads you to discover some neatly hidden little “useful bits” that unlock the first compartment – right where you’d expect it to be. That leaves an obvious area for a second compartment although the way into that one is a bit less obvious – not too tricky, just less obvious. The fun little telly (Old TV to give it it’s proper name) really looks the part, especially with the little bunny ears aerial on the top of it. The dial has a wonderfully satisfying click to it when you rotate it and the button below the dial begs to be played with.


This one took a little longer to solve than the fridge and some of the red herrings kept me occupied for a while before I stumbled across the solution.


Having opened it, it took me  little while to work out just how the locking mechanism actually kept everything all nicely locked up – it’s wonderfully simple and elegant, and very effective. Clever piece of design.


The last puzzle box in the batch comes in the shape of a Twin-Lens Reflex Camera, neatly branded across the top with its designer’s name: Kawashima. Being a bit of a camera-nut since I was a kid, I was never going to pass up on this one – it really looks the business with all the detailing on the lenses.
It’s also easily the toughest of the puzzles in this pile. 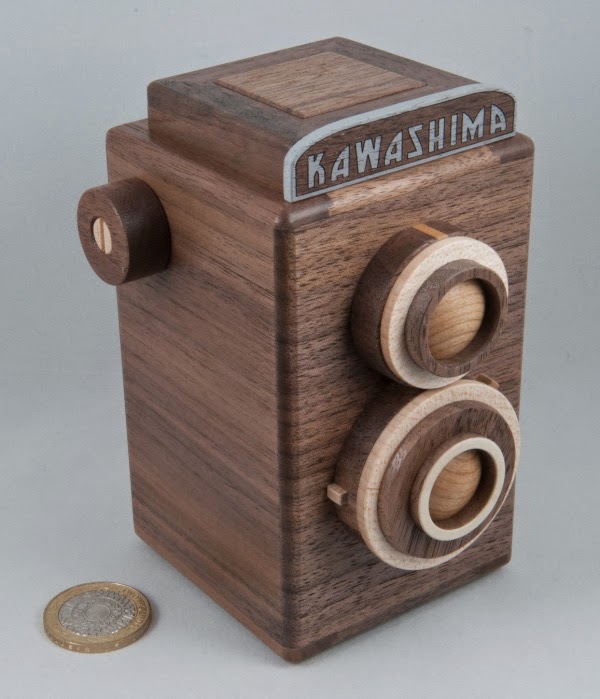 The locking mechanism is quite unusual and very well disguised. Only problem was, having discovered the hidden compartment, it was pretty clear from the external dimensions that I was still missing something… and no amount of fiddling around and close examination would reveal a way in or even where that way in might be.
I ended up spending a long time trying to find something new and ultimately failed – having to resort to the neat little solution card for the answer – and I wasn’t disappointed or embarrassed by that – it is not only fiendishly clever, it is perfectly hidden – a fantastic puzzle box that looks a million dollars.  Winning combination.
Posted by allard at 17:55