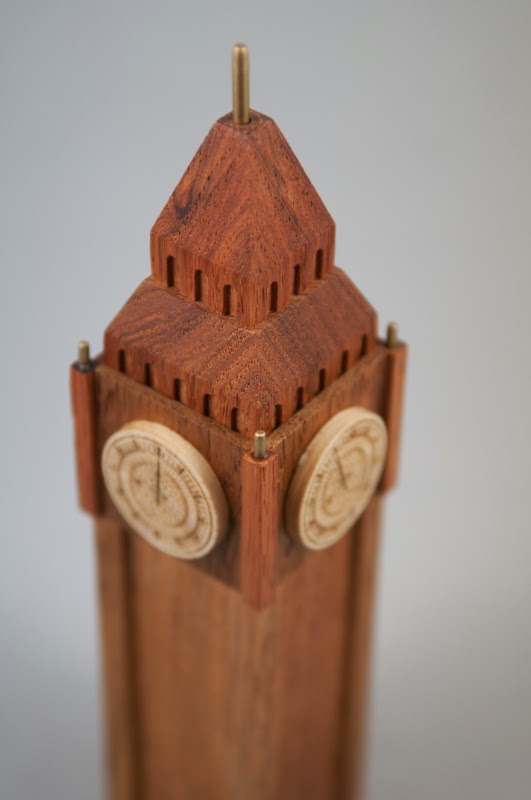 Let me pin my colours to the mast right up front: I think Big Ben is the best exchange puzzle from IPP34.
No I haven’t played with all of the others yet, let alone solved them all, but I am pretty confident that when I have worked my way through the couple of crates of exchange puzzles in the puzzle cave, I will come back to this statement comfortable that it hasn’t been disproved. Big Ben is THAT good.


Ok, having got my prejudices out of the way, let’s talk about the puzzle…


Big Ben was John Moores’ exchange puzzle at IPP34. It was designed jointly by John, Brian Young and Junichi Yananose and then manufactured by the latter two gents down-under in Mr Puzzle’s lair.


John’s patter in the exchange explained that your goal was to find Big Ben, which as everyone should know is the bell inside the clock tower and not the clock or the tower itself. Along the way you should discover the Queen’s lost crown and one or two other items that might be useful… he described it as a sequential discovery puzzle (my favourite!) and said he hoped I enjoyed it, with a bit of a grin on his face that suggested he already knew I was going to … and with good reason.


I’d heard rumours that Brian felt it was on a par with his Opening Bat and was a puzzle he was massively proud of… that alone says a lot! 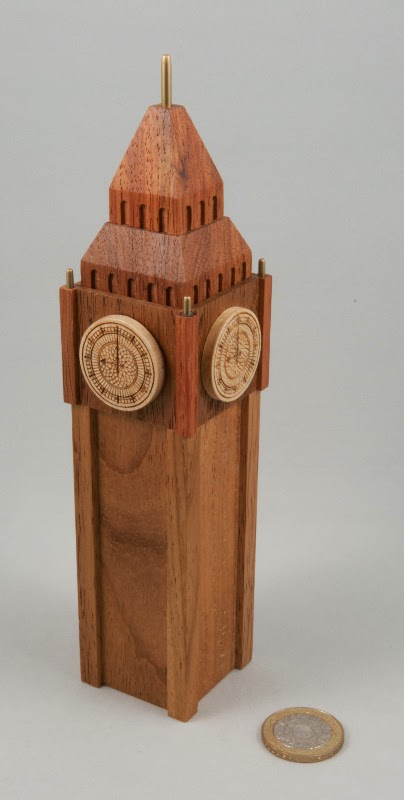 The puzzle looks like the Elizabeth Tower with a couple of the features represented by brass rods, the main structure completed in wood. Brian’s etched the puzzle’s details on the base of the tower using his fancy new laser-cutter. The clock dials are all at 9 o’clock at the start … and it’s important (to Brian, if not to anyone else) that you return the puzzle to its start position exactly before you may consider it solved…


To start with you might find one or two things that you suspect will become useful, but it took me quite a long time to find the first real “move” – I’d assumed that it would be along one set of lines and insisted on exploring those well beyond the point that I’d probably convinced myself that it couldn’t possibly be the case before I stumbled across the real first “move”…


From there I made some progress to the next main phase of the puzzle and then once again found myself stumped for a while…I love puzzles that give you a bit of progress, then stump you again at the next corner.


When I worked out what the next section actually was, it didn’t take too long to get through it, although there are some opportunities to spend a lot longer in there than strictly necessary as well… I managed to avoid wasting a lot of time in there, which was good.


When you’ve partially disassembled the tower, things get really interesting. Definitely time to get your thinking cap on!


The solution to the second half of the puzzle is really glorious… requiring the detective skills of Poirot and the imagination of Heath Robinson. At one point near the end of the solution I was pretty certain I’d recognised what I needed to do, but things didn’t quite work properly … until I in-spanned a few more of the little grey cells and realised something beautifully subtle, and then had her top off in a flash, and Big Ben dropped neatly onto the desk. 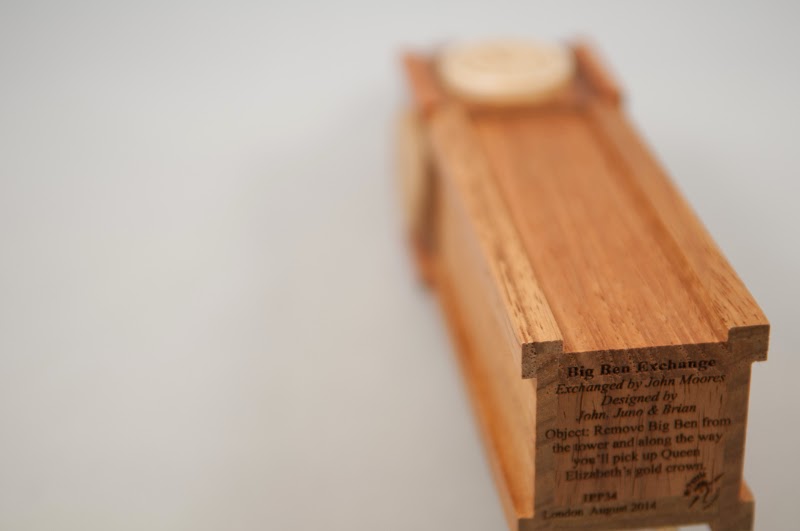 Reassembly, even having seen all of the innards, is far from trivial – and remembering to replace all the bits at the right time is important or you’ll find yourself back-tracking and re-doing sections (yip, got the T-shirt!) … and when all is said and done, I’ll give you great odds that your clocks aren’t all showing 9 o’clock… try again! :-)


This is a seriously classy puzzle. The fact that John was giving them away in the exchange says heaps about the man – I trust he’ll get a huge kick out of the puzzlement that he provides to his fellow puzzlists as a result. Thanks John – it is EPIC!


Kevin’s already done a write-up of Big Ben over on his blog – read it! Then keep an eye on Brian’s web-site and buy one – you won’t be sorry!

STOP PRESS:
Brian's site's just been updated and you can buy a copy of your own over here.
Posted by allard at 21:54