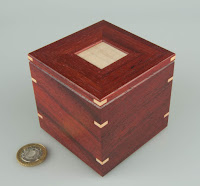 The stuff of legends!

This one is awesome - I was very happy indeed when someone offered me a copy recently!

It’s definitely one-part magic, one-part mystery – from the elvish script in a ring around the bottom of the box to the wonderfully complex mechanism inside that is fully displayed to the victorious solver – this one defies logic … sort of.

Irmo was Eric Fuller’s 2008 Puzzle Deign Competition entry – and it took a well-deserved first prize award. A number of copies were available at the time, however these days people seem reasonably unwilling to part with their copies, so when they turn up on the usual auction sites, they generally fetch a pretty penny.

Back in 2008 Eric described Irmo as “probably the best box Ihave ever made.” 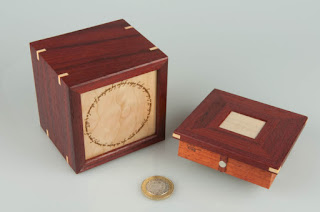 It measures just shy of 10cm cubed and looks rather handsome dressed in Padauk with quilted maple insets top and bottom, and some very neat slip-feathers. As you’d expect, the exterior finish is great and the wood really looks alive!

From an initial inspection, it appears to have a thin lid that wiggles just a tiny amount – just enough to let you know this is where it’s going to open up – and when it’s locked – it will remain very firmly shut… the floating base has a ring of elvish script on it that offers the puzzler a clue to the solution… and interestingly, it seems to have some magnets keeping it in place – which seems a little unusual.

This is a pretty unusual puzzle box and you’ll soon find that trying all the usual sorts of things yields pretty much nothing… GRINS… I like this puzzle already!

Spend a little time with it and experiment and you might find it behaving in unusual ways when you do certain things to it, but it’ll take you a while to work out exactly what to do and execute it properly in order to get it to open… at which point you’ll smile at Eric’s extreme thoughtfulness in placing a couple of magnets in just the right spot to stop you doing something silly and damaging anything. 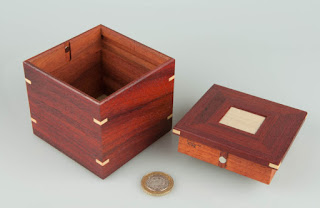 Remove the lid and you get to marvel (seriously, marvel!) at the incredible mechanical masterpiece that keeps it locked up, and then unlocks it on command… it’s all protected behind a sheet of clear acrylic so that you can’t do any inadvertent damage, but it’s a jolly marvellous piece of engineering and great fun to experiment with to perfect the technique… that mechanism is not only clever, Eric’s made it really beautiful as well so it thoroughly deserves to be on display when puzzlers solve this little box.