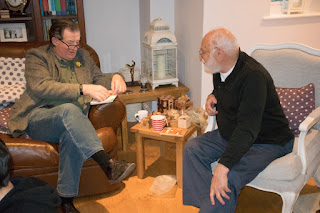 Gill and I had the pleasure of having Saul and Paulette Bobroff to stay for a week a little while back… they’d been over visiting their granddaughter in Ireland and had spent some time with Jim Kerley before coming over to Brum to spend a little time puzzling and knitting.

Whilst planning for their visit, Paulette spotted that there was a Yarn Festival happening in Edinburgh during their time with us, so within moments (and a few quick emails to & fro across the pond) Gill had teed up a couple of tickets and some flights for her and Paulette to head north for a day’s yarning … leaving the lads free to puzzle… on a Saturday, so I did what any self-respecting puzzlist would do and promptly invited a bunch of puzzlers around for the day…

They began arriving at around 10 in the morning – Chris being the first, if memory serves … actually, no, that’s not quite true, one of them arrived at about 11am, the week before! [He felt very sheepish when he realised what he’d done so we had a cup of coffee, talked puzzles and maths for a while and then he headed back home for a week.]

By late morning we had a lounge-full of puzzlers and there were puzzles strewn over practically every horizontal surface (can you tell the girls were in Edinburgh by this point?). Ethel had brought Laurie up and he’d brought his customary rucksack-full-of-puzzles which he duly passed around to anyone who might not currently have enough puzzles in their hands with a “Here, you’ll like this one”.

Simon Nightingale made the trip east again and if he hadn’t outed himself no-one would have known about his trip the previous week! Ali, Oli and Steve arrived in force and Adin and Sophie completed the puzzling gang for the day.

I’d brought my copy of Peter Hajek’s How Box down for everyone who hadn’t already seen it, to have a bash at, and it pretty much always raised a few smiles along the way… if you’ve seen it, you’ll understand why! And exactly How!

Saul had laden the coffee table with piles of goodies and made sure that pretty much everyone left with some sort of puzzling gift from him… he’d started plying me with all sorts of gifts earlier in the week and I ended up with an embarrassing number of Bobroff originals (including some VERY sought-after Bobroff impossible objects) and some samples from The Puzzle & Craft Factory – a small puzzle manufacturer not far from his home in the USA.

At one point Sophie mentioned that something was impossible, so I took that as my cue to introduce Saul’s Nine Drilled Holes which he’d given me earlier that week. It was duly passed around and speculated on. We started with the usual, “How do you think that was made?” – and the obvious first answer “Curved drill bits!” – “No, think about that…” – “Ahhh…” – mighty confused expression!

Several more plausible possibilities are mooted before an extended discussion of the actual process and the machinery required… and then things took a really interesting turn (which given the audience, you might have predicted!) when Chris wondered aloud whether he’d be able to 3D print one in a (perfectly) clear material. Saul’s interest was piqued and soon enough there was a full-on discussion of printing using clear materials, printing using sacrificial materials and moulding a clear positive and several potential avenues for exploration… 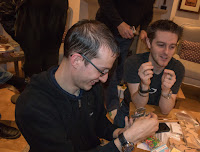 At some point lunch was called and several pizzas, some salad, a few litres of ice cream (Devonshire clotted cream if you’re interested) and a large pot full of chocolate sauce were turned into puzzle-solving-fuel. 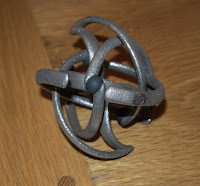 Back at the puzzling, a few of the guys enjoyed a new lock I’d managed to pick up recently before I decided I needed my pound of flesh out of the assembled puzzlists: I’d recently acquired a copy of Bathsheba Grossman’s Moon Pi and it was sitting in more than the usual number of pieces, ready for assembly. I’d done some research and read up on how they were supposed to be assembled (with extreme difficulty) and even been warned by a friend that his copy had required a visit from some world-renowned puzzlers to get it assembled, so I did what anyone else would do in my position and gave it to Chris and Oli and asked them to assemble it for me. 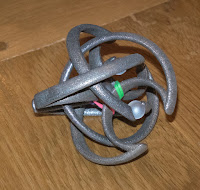 To their credit, they did it not just once, but twice!

On the first assembly they used the training wheels (a magnetic core and rubber balls) and flushed with their success, took it apart and promptly reassembled it (using a couple of sacrificial loom bands that Chris apparently never leaves home without) using the glass marbles…  which is how it currently resides on my window sill – thanks guys!!

Laurie became the first person brave enough to take my copy of the Surprising Cube apart and promptly reassembled it before remarking “It’s not that difficult – you’ll see.”  [Full disclosure: So far Louis and Laurie have done it and I haven’t… one of these days…]

Early in the evening we got a call from the girls to say they’d landed back in Brum so we ordered a large pile of fish and chips… collected it just before they arrived to provide a veritable feast for all.

Simon had brought around a couple of boxes of puzzles-looking-for-a-new-home and I managed to snag a couple of rather interesting old exchange puzzles and a vicious-looking entanglement for the now-customary donation to Oxfam.

Paulette managed to catch up with Laurie and Ethel before they headed off on the long trek south leaving a decreasing entanglement of puzzlers chatting, fiddling with the odd puzzle and generally “encouraging” one another to do better – mainly through the medium of banter!

Thanks for coming around folks – it was great to have you all… and especially to Saul and Paulette for not only providing the excuse, the week’s entertainment, but also for all the little gifts left behind, the wonderful memories and great new friendships. 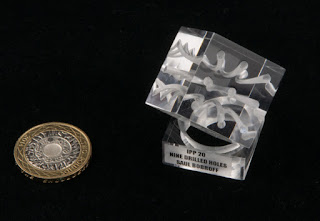 It feels only right to give this little object a bit of a spotlight: Saul Bobroff’s IPP20 Exchange puzzle is quite rightly one of the most sought-after impossible objects around.

It is a stunningly beautiful object… but one that teases even the best of minds. It’s a cube of beautifully polished clear acrylic just over an inch on each side. It is a thoroughly beautiful little object – the light positively dances around it and it really draws you in, inviting you to work out how the heck it came to be thus… 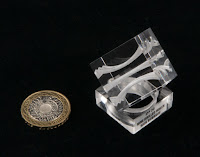 You see there are (there’s a clue in the name!) 9 holes drilled through from one side to the opposite side in a 3 * 3 matrix. The centre hole goes straight through the cube – so far so good – but all the holes around the edges and bowed inward toward that central hole – and that’s just wrong!  [Before you ask, yes they are genuine holes, you could pass a piece of thread through each one of them.] 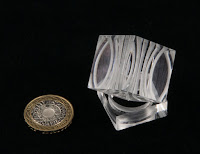 You cannot drill around a bend – and yet… there are 8 of them in this little gem.
During his stay, Saul and I had several long conversations about his manufacturing process and even knowing exactly how he’s done it, I still think this is an object worthy of wonder – there is a lot of effort encapsulated in that little acrylic cube…