I’ve been collecting little bits of beauty from Jane Kostick for a couple of years now and I always get excited at the prospect of new goodies from her – but this time was different. 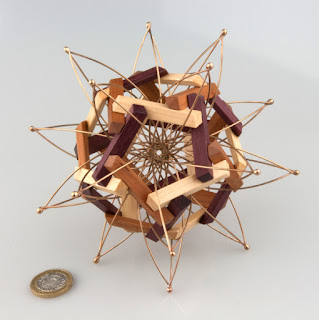 You see, about three years ago I acquired a set of Quintetra pieces from her and she promised she’d make me something special for its insides… every now and then in the intervening period we’d touch base and she tell me she’d made up something interesting for me, but it wasn’t worth shipping over yet, she had a few more ideas she wanted to make up before boxing it all up and shipping it over the pond.

Early this year the message changed to more along the lines of “OK, I’ve got a few things for you, would you like them now?” By return of email I was offering to send cash and just before the transaction was completed she offered to add in a new style of star that she was working on – another of John’s designs that he’d been making for years… I was never going to turn that down and I duly sent over some money… 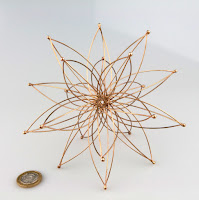 A week later DHL dropped off a medium sized box and I had the unbridled joy of opening a package from one of my favourite crafts(wo)men where I had literally no idea what was in there… I knew I was getting a star and some innards for my Quintetra, but beyond that I had no idea as Jane had been a little cryptic when she’d described what she was putting into the package… think of it as a grown-up version of a Lucky Packet!


Opening the box, I quickly found the star (it’s the biggest thing in there!) and then began a wonderful journey through a series of individual packages with post-it notes on them giving me instructions and challenges…

I started out with the star – a variation on John’s collapsible star, this one seems to have the “wrong” wires joined at the tips giving it a beautifully full and open structure – it won’t collapse in this configuration, but it will allow the outer ten-axis sticks from an earlier Kostick creation to weave in between the arms of the star – seemingly floating inside the star – and of course they fit perfectly into those spaces – knowing Jane, that wasn’t a coincidence!

There was a second, smaller six-axis star in the package that fits perfectly inside the Quintetra pieces – when I say perfectly, I really mean it! The inside of the assembled Quintetra has pyramidal gaps between the pieces that close off at the surface of the assembly… the tips of that star stretch up into each of those gaps as far as they possibly can without fouling the assembly – the star fills the internal space perfectly. That’s the first of the objects for inside the Quintetra.

The next interesting item is a rhombic dodecahedron in (I suspect) spalted apple (and I suspect only because I’ve had something in a very similar wood from Jane before and that was spalted apple!) maple (thanks for correcting me, Jane!).

This one opens up to reveal a darker interior with the neatest little Tetraxis star nestled neatly inside it… open it up further and the star comes out (it’s a perfect little collapsible chappie!) and then you notice something interesting about the pieces – they all have concealed magnets to hold the pieces together, but they’re cunningly aligned to allow the pieces to be inverted and reassembled in the shape of a regular dodecahedron(!) – which in turn fits snugly inside that Quintetra of mine… whodathunkit?

…the last of the goodies to go inside the Quintetra was a real puzzle: the triacontahedron box is made up of six identical panels that lock together to form a box courtesy of the perfectly placed magnets.

Inside that box was twelve little bits of wood… so far, so good… now separate from that was a tube with a cube in it, and a challenge to insert the cube, and the twelve little bits into the box… and it makes a great little challenge! The space isn’t so much filled, as rather effectively utilised! I’ve given it to a number of serious puzzlers and it’s found a couple of them wanting… it makes a great puzzle – and of course the resulting assembly fits perfectly inside the Quintetra – the third thingie that does… 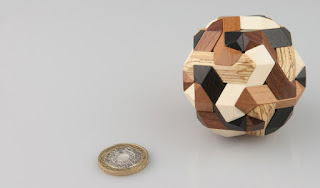 There was also a set of short six-axis sticks that wrap perfectly around those two wooden Quintetra interiors… a lovely addition to the set.

The final item in my Lucky Packet was a fantastic little puzzle called Phive. It starts out life in a little clear canister in a pleasing double flowered shape made up of five peaks and valleys in a circle in each of the main two faces. Shake the pieces out into your hand and you’re faced with four wooden pieces (handed pairs) and a ball bearing that had been hiding in the centre – your goal is simply to reassemble the pieces back to their starting shape inside the canister.


And that turns out to be quite a challenge!

It took me a goodly time to get it sorted on my first attempt and every single puzzler I’ve given it to has found it a neat little challenge too… I think it’s a cracking little teaser and it came as a total surprise, which makes it even better!


Jane has subsequently tried it on a few hard-core puzzlers herself at G4G and I suspect that she found the results rather gratifying… now if only we can convince her to make some more… :-)

Thanks Jane – for a wonderful little treasure chest of puzzling goodies with a beautifully mathematical bent.
Posted by allard at 17:49

Email ThisBlogThis!Share to TwitterShare to FacebookShare to Pinterest
Labels: John and Jane Kostick