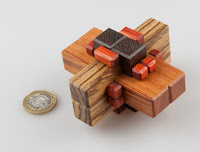 A while back my puzzle-designing mate Adin popped around for a visit and handed me a copy of something he’d designed and made himself… it was a six-piece burr he’d called Amulet and it had me thoroughly confuzzled. He’s fiddled around with a standard six-piece burr and added a few constraining voxels around the middle and shorted one of the axes… adding those voxels makes all the difference it turns out – without them there’d be 144 solutions, with them the solution is unique… and quite tricky! 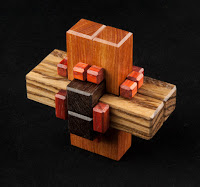 The first time I met this puzzle I got virtually nowhere with it… so when Adin asked for some feedback, I told him I thought it was a great puzzle and he should make a few, and sell me one!

Life intervened for a while and then a couple of months ago he decided the time had come to make a few copies so he canvassed a few puzzlers and pretty soon had takers for all he was about to make… luckily I managed to join the queue in time and at the last MPP Adin arrived with a couple of freshly finished Amulets for a few of us. 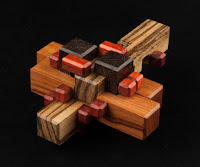 I’m pleased to say that this time I made a lot more progress and I’m even more impressed with it now that I’ve had some quality puzzling time with it!

Those little cubies on the sides really get in the way and stop you from doing an awful lot of useful moves… forcing you to take the one true path to the solution (I told you it was unique!). 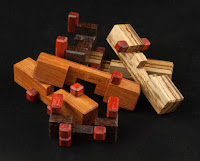 This is one of those burrs that takes several moves to get pieces in the right state before you can finally (after 10 moves) release the first piece… and then it falls to bits in your hands! Right up until the last moment everything hangs together beautifully – it doesn’t get all sloppy and allow all manner of weird twists and turns – I really appreciate that in my burrs!

Putting it all back together is a very serious challenge! ‘nuff said?

Terrific burr from a multi-talented designer!
Posted by allard at 18:00