MPP twenty-two turned out to be a reasonably low-key relaxed event with about 10 hardened puzzlers appearing for a day’s banter and puzzling with friends. Louis had made his customary trip across the channel and spent the weekend with Gill and I, starting with some light puzzling on the Friday evening… and yes, as usual I left a row of puzzles to be solved on the desk when I hit the sack and the next morning most of them had been solved… Fantastic service!

Louis and I managed to get to the hall before anyone else this time and started getting it all set up and before long we had tables and chairs set out and even some puzzlers to chat to.

Tim Turner had arrived with several crates of his Timeless Treasures and once again I found myself raking through the neatly laid out puzzles from yesteryear and selecting a few more lovely old Journet dexterity puzzles to add to the little pile at home – for which I roundly blame Frank! He should never have encouraged me to look at them in the first place – I know I’m rubbish at dexterity puzzles and don’t really enjoy them, but there’s something more than a little addictive about them… damn you, Frank! [For the record, Louis solved pretty much every one the next morning before I took him off to the airport to catch his flight home!]

I also found a lovely little ring maze on Tim’s table that has caused me a little bit of inner turmoil – I collect puzzles to play with them, so they don’t tend to stay in their wrapping very long… this little puzzle however is probably more than 60 years old and is still apparently sealed in its original packaging… so do I break the seal and play with it? And would that be a crime?

Adin had brought along a few copies of his Amulet puzzle so I eagerly thrust some money in his general direction and exchanged it for a lovely puzzle… which will appear written up in these pages shortly!

Knowing that Chris really enjoys a challenge, Steve had brought along a set of hexagonal doweled sticks that he claimed was a puzzle – without any idea of the eventual shape, Chris sat down and began experimenting with various constructions. He managed to find quite a few very-nearly solutions that armed him with a pretty good understanding of mechanics – before he reverse-engineered the solution and duly put it all together – particularly impressive for me as at one point there were two rather complicated sub-assemblies getting woven together before the final dowels were inserted to lock it all together… he looked pretty pleased with himself after that… and rightly so! 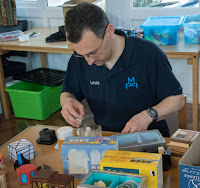 Steve had also brought along a few Toyo Glass packing puzzles that he’d recently acquired for a rather attractive price – several of us had a go at Home Alone Husband – with Oli proving to be particularly adept at that particular puzzle… I’m sure Jack has nothing to do with it!

I felt a bit bad that I ended up terrorising Dale for ages with a copy of Saul’s Drop In – I think he quite liked it as after he’d convinced himself it was impossible, he ended up tracing the pieces so that he could make up a copy of his own…

I managed to entertain several people with Jane Kostick’s lovely little triacontahedron box packing puzzle – it’s a simple little box that you need to pack twelve oddly shaped (identical) blocks, and a cube into… it kept quite a few people going for quite a while, and the grins when they finally found the beautifully symmetric solution made the experience all worthwhile.

My new copy of Easy Livin’ entertained a couple of people who were brave enough to take it apart – in fairness, after the first couple of moves it becomes very quickly apparent this ain’t no ordinary burr!

Steve have been printing up new designs he was playing with and ended up giving me a copy of a 6-piece caged burr on a hexagonal grid… I spent a while trying to extract the first piece and when he saw I was getting nowhere, he took pity on me and sent it home with me… where it’s still safely locked up, the subtle move required to progress still eluding me… when will I learn? 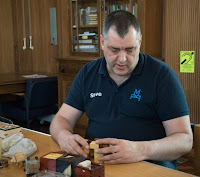 Michael Dowle had brought along copies of another new design, Symmetrize, that most people ended up having a go at… it consists of four acrylic pieces with shapes made up of overlapping circles which you are tasked with arranging into a shape that is rotationally symmetrical… I saw Chris come up with a couple of solutions (which I think surprised Michael as he thought there was a unique solution), as did Louis… and once again Mike insisted that I take a copy home for my troubles… (unsolved!) – Thanks Mike!

I’ve glossed over lunch (standard Barnt Green fare: pig buns!) and refreshments (lots and shed-loads of biscuits!) but you’re probably more interested in the people and the puzzles anyway! So I’ll stop there…