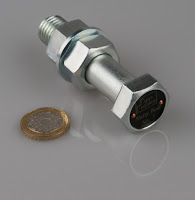 A while back Steve teased us at an MPP with a set of Nutty Bolts he’d made up – ostensibly they all looked pretty similar (aside from their distinguishing colourful name tags) and the aim was the same for each of them: remove the trapped washer.


Flash forward many months and Steve had a batch of 30 of them available for sale, first at James’ PMPP earlier this year, and then on his website… I picked up a copy at James’ place and I’ve been meaning to write about it for a while now. 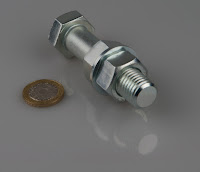 Steve’s plans for the series are to produce a set of virtually identical-looking bolts, all of them with a pair of nuts and a washer on them where the aim is to release the washer… all with different mechanisms to perplex puzzlists.


Nutty bolt #1 is one of the simpler designs he showed us at MPP but it’s a cracker – while there have been similar mechanisms on puzzle bolts in the past, Steve’s bolts are beautifully machined and they behave impeccably… there is zero chance of anything catching unexpectedly or the mechanism not working perfectly every time. You won’t need to bang it or encourage it to do its thing, but having said that, it’s a solid four inch bolt so it will take pretty much any sort of abuse you can throw at it. When he says that every bolt has been finished by hand, he means it, and he’s proud of his work!

Nutty Bolt #1 has a really elegant locking mechanism that rewards thought and a delicate examination.


Solve it and everything is open to examination – and I’m certain you’ll agree it’s been neatly done….


Steve’s first batch of 30 #1’s sold out fairly quickly, but if you drop him a line via his website, he’ll keep a list of folks who want one and chances are he’ll be making another batch or two in the future.
Posted by allard at 18:14