It was an early start for Gill and I on the Monday morning – so early that there wasn’t any traffic on the M42! We found ourselves queueing to check in behind the entire Shrewsbury Town football club (players, not supporters, he added hastily, in case they actually have supporters) – although once a few more check-in desks opened up, things moved quite quickly… giving us plenty of time for a coffee before the quick hop across to AMS… for a short layover during which we found the entire Luxembourg contingent waiting for the same flight to KIX. That was a long flight, with virtually no sleep, shortened a bit by a David Baldacci novel that was really cheap on the Kindle. It passed the time. 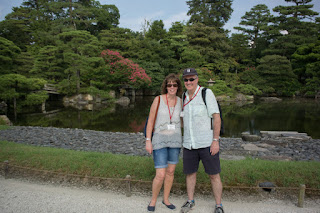 At Kansai International the puzzlers reassembled in the immigration queue before collecting our bags and heading for the Limousine Bus to Kyoto, where René stopped Gill and I from insisting on getting off the bus stop before the one right outside our hotel. We arrived too early to check in so Gill and I settled down in the hotel bar for a couple of hours over rosbif sandwiches and a couple of drinks while we watched some delighted little schoolkids being taught to make mocktails by the hotel bar staff for their parents and teachers… much happiness, even if there wasn’t much alcohol for the big people!

We check in a bit before we’re supposed to be allowed to and managed to unpack and crash for a few hours’ sleep – remember it’s now Tuesday afternoon and we haven’t slept since Sunday night… and we’re old and not used to doing that anymore! We headed out at about 6pm to wander around a little and get our bearings – after about twenty minutes of wandering we bump into Brian and Sue on a random street corner nowhere near the hotel. They’d been wandering the back streets in search of a dive bar to continue a tradition when the rest of the gang arrives… 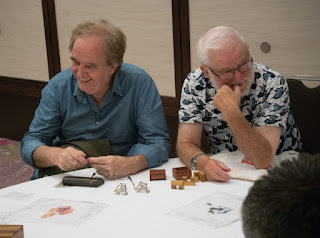 They temporarily give up on their mission and we head off to the station in search of some dinner – there are a lot of restaurants at the station! We find a great little place and have a terrific meal of Yakisoba and kebabs.

Back at the hotel we find Pat Major with a Martini and a Club Sandwich so we join him and catch up for a while before we feel the need to crash somewhere around 10pm… that goes well until 4am when Gill and I are wide awake and reading our books.

On Wednesday Gill and I go hunting for fabric and fibre stores on a bit of a recce for a SOAPs’ shopping trip.  It doesn’t start well when the first shop we try and find has closed – we find this out when we ask the wonderfully helpful centre assistants whose first language is not English where the shop is, only for both of them to coo (literally!) “Aaah, <insert shop name here>” before making the universal sign for closed and crossing their arms in front of them… and then apologising furiously for the fact that the shop we were looking for wasn’t there any longer…

We had slightly more luck looking for the next one – it wasn’t where it was supposed to be – it had moved, so someone helpfully pointed us in the right direction… sort of. We got to within about a block of where we thought it was, but couldn’t find it so we asked a lovely old lady at a bus stop – she recognised the name immediately and insisted on taking us to the shop herself – not sure if she actually caught her bus after that! We didn’t feel too bad about missing it – we’d walked right past it – as it was on the 2nd floor and the only sign of its presence on the ground outside was a name in the lobby in Katakana – something neither Gill or I have mastered yet! It turns out to be an Aladdin’s cave of crafty stuff… good find! 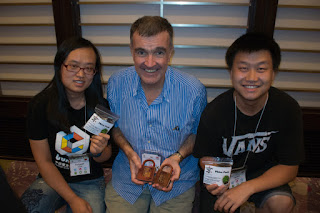 From there we ducked into a department store that happened to have a craft, fabric and fibre store in the basement – Gill’s delighted, and when we head up to the toy department, I’m delighted to find a small selection of puzzles, including an almost complete selection of Hanayamas so I pick up a copy of Cast Diamond and Cast Cake.

We have a couple of dark chocolate iced mochas at Starbucks (this became a bit of a theme given the temperatures and the humidity while we were there) before heading across to the Kyoto Cycle Project to meet Hideaki. He’s our tour guide for the afternoon and takes us on a wonderful tour around the back streets of Kyoto, along the canals & river, taking in a couple of the geisha quarters and the Imperial Palace. Interesting to see a smart mini-bus disgorging a load of smartly-dressed businessmen in the centre of the geisha district while several impossibly doll-like maiko clip-clop between their tea-houses and the school building. We cycled up and down the banks of the Kamo River with a lightning tour of the Imperial Palace in between, before getting absolutely drenched in a downpour about half a mile from the cycle shop at the end of the tour. Sod’s Law! 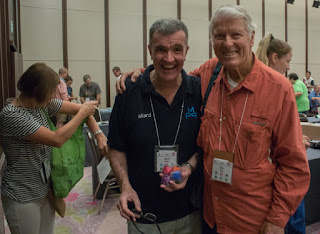 We grab a sandwich and a coffee in the mall before heading back to the hotel and formally registering for IPP36 – badges around our necks it starts to feel like IPP has begun. Dinner for the two of us is at a restaurant across the road from the hotel… and after a quiet dinner we realise there’s a large table-full of puzzlers at the other end of the restaurant so we wander over and find Nigel and Steve and a bunch of other friends we haven’t seen in ages (or a couple of weeks!).

When everyone’s finished their dinner we head back to the hotel and pretty much take over the lobby area. There are even more puzzlers there to catch up with and I find myself alternately thrusting puzzles at others and having puzzles thrust at me… by far the one that gives me most pleasure is a new design from Ken Irvine called Lil’ Bruce (named after his second grandson). Four pieces make it absolutely clear exactly where they need to go, you just can’t get them to actually go there… brilliant puzzle.

We chat and puzzle and drink in the lobby until we’re exhausted and then crash… it’s been a year since we’ve seen some of these guys – it has to be done!
Posted by allard at 20:08