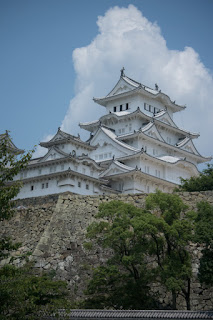 Thursday is the official bus tour to Himeji Castle and the Japan Toy Museum. After an early breakfast we find a happy bunch of puzzlers queuing for three buses – we opt for the last bus along with Frank, Chinny and the Pawliger-clan and we’re soon joined by the Chinese contingent. Markus is also there and he’s dishing out folding puzzles to amuse us en route. Louchen and I find ourselves comparing notes for the various folding challenges – after a slow start I finally crack the first one, and find the next two go down reasonably soon after, but then things slow down a lot and it feels like ages before I finally manage to get the next in the series folded properly – and by the end of the day I find I’ve still only completed four out fo the 7 challenges. Score one for Markus!

I do manage to entertain Markus for a while on the bus with my copy of Haleslock #1 – I think he really enjoys the solve and gets through virtually all of it without any suggestions. 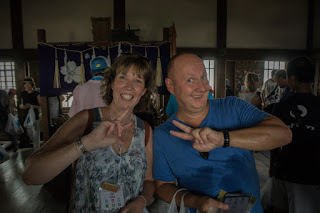 Our first stop of the day is at the Akashi Kaikyō Bridge for a little sightseeing -it’s blisteringly hot after the cool of the aircon in the bus so we take a couple of quick snaps and then pile into the (air-conditioned!) visitor centre work our way around the various exhibits showing how the bridge was built and how it compares to similar bridges around the world… a little fact for you: during the construction, the area suffered a serious earthquake and one of the spans needed to be lengthened by a metre because the gap between the towers had changed! 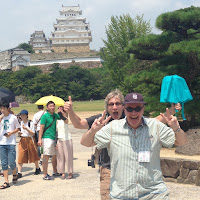 Back on the bus for the ride to Himeji Castle before a hot and sweaty hike up to the top of the main keep – had to be done, if only for the stunning view of the ant-people down below, oh, and the cheesy tourist pics!

The walk down feels a lot more pleasant than the hike up and we wander across the road for shaved ices and iced coffees – as good a choice for lunch as any!

From there our buses take us to the Japan Toy Museum that houses a collection of around 100,000 mainly Japanese traditional toys and games.

Frank managed to find the four Kumiki puzzles on display (think he has some sort of spidey-sense for them!) and then most of us crammed into their classroom for a hands-on lesson in making a Jacob’s Ladder - apparently a traditional Japanese toy.

I wonder how many other countries lay claim to something similar?! [Several according to Wikipedia!] We’re led by our enthusiastic museum director who is being translated by an even more enthusiastic assistant – all for the princely sum of ¥200! (Really cheap, even after Brexit!)

We stop at a nearby motorway services on the way out for some dinner – ordered on a big electronic picture board that spat out magic little pieces of paper (all in Japanese) that you could exchange for your food… if you could recognise it!

The bus trip back to the hotel was a long fight against the urgent need for some sleep, but managed to have a really nice chat with Chinny…

Back at the hotel we run into Wil sitting all on his own, after a quick hello we head to the room to disgorge rucksack before going to the Design Competition room and all that that holds… :-) 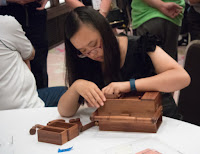 I make a bee-line for Mike Toulouzas’ Toolbox and Frank and I have a bash at it after Clive has admitted defeat after finding the first move.  We manage to get all the way through it, but we’re pretty sure that we haven’t done things in the right order or used the right tools – and we managed to break the spanner in the process! (SORRY Mike!!) – we also managed to pretty much reset it all properly, and work out what we should have used in what order, with a little help from Jeff who’d done it properly earlier in the day. 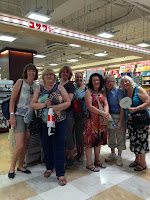 I try my hand at a few other puzzles before Dick sits me down and shows me two lovely old Chinese locks that are looking for a new home – and he lets me take them off his hands, kind gentleman that he is!


On Friday Gill’s organised an informal Fabric & Fibre tour for a few of the SOAPs based on our earlier recce – and eight ladies head out in search or fabric, fibre and adventure… and I know for a fact that plenty of fabric and fibres are purchased – I shall say no more about the third…

The lads meanwhile headed out to Osho’s shop with Brian leading an unruly bunch of us toward the station to grab a train out to the appropriate suburb. When we get off the shuttle bus to the station we find Edi and Sherry and the children have just arrived and they’re waiting for the shuttle to the hotel – plenty of greetings and quick catchings-up ensue before the unruly bunch heads off to the platform to grab the train… and somehow in the process we lose Strijbos! [No other casualties will be reported on this trip; you will be glad to read.]

The air-conditioned train ride is great, but the short walk in the 39 degree heat requires a stop at one or two roadside drinks vending machines along the way…

We find the appropriate staircase and head up and into Puzzle-In, Osho’s puzzle shrine: part personal collection, part puzzle shop, part play area … and truth be told there’s a pretty grey line between them all…

I picked up a few flat packing puzzles and when I tried to pay for them Osho told me how much he liked reading my blog – Gosh! Day made!

We all puzzled and chatted and generally visited for quite a while – at one point the doorbell rang and Hendrik walked in and seemed a little surprised to find the place already jam-packed with IPP-folk. 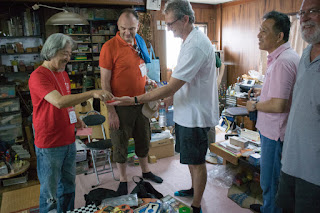 On the train back into Kyoto we realise that not many of us actually want lunch after all so we head our separate ways with a few of us hunting for tat in the basement of Yodabashi before heading back to the hotel.

I spend a couple of hours getting organised for the puzzle exchange the next day before finding the usual suspects waiting outside the hotel ball room for the Founder’s Reception. Jerry does a smashing job of welcoming the new comers before declaring IPP36 officially opened. There is a lot of milling around and catching up and some great grub, before most folks retire to the Design Competition room for some more serious puzzling and some less serious banter.

Back down at the Design Competition Big Steve is bragging about just how organised he is – telling us all that in the morning his exchange assistant will be knocking on his door to wake him up and make sure that he’s going to be ready on time… What’s yours going to do he asks me,(clearly temporarily forgetting that Gill is my exchange assistant this year…) I can’t stop myself from saying that she will be rolling over and whispering “Wake up darling, it’s time to exchange” – the ensuing banter had several of us literally crying with laughter for ages …

For the record, Steve sounded a little rough in the morning – and we shall speak of this no more!
Posted by allard at 10:43