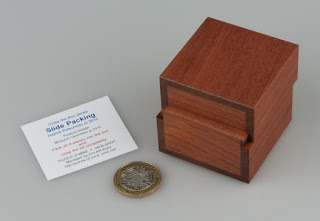 They’re both excellent and if you get a chance to play with a copy, or pick up one of your own, you will not be disappointed!

Slide Packing has a really simple premise – it’s one of those puzzles you can just leave out without any description or instructions and everyone will instinctively know exactly what the goal is… you’re presented with a box in two halves and a few pentominoes … so clearly the object to put the pieces into the box and close it up… simples!

The two halves of the box slide together on a pair of rails carved into the edges of the two pieces. The bottom half of the box will allow two layers of cubies and the top half will fit a single layer… the resulting space inside the closed box allowing for a full 3*3*3 cube. The pieces you need to put inside the box will only take up 20 of those 27 cubies – so there’s theoretically bags of space left over inside there once this thing’s solved… 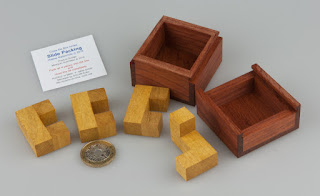 Hopefully I’ve convinced you by now, dear reader, that this is not only theoretically possible, but you’re probably thinking to yourself that surely there’s another catch… well there ain’t – that is it!

But when you start playing with putting the pieces into the bottom half and sliding the lid closed you realise the problem – you’re going to have to either put one of the flat pieces inside the lid and get the others into the bottom half of the box without any obstruction to the top half, which would allow you to simply slide the lid into place, or you’re going to have to manoeuvre things around while the lid is semi-open and hope you can get things where you need them to be…

Now when I first sat down with this puzzle it was pretty clear what you were trying to do, and I very quickly found that everything I wanted to try wouldn’t work. So I fiddled around for a while and rapidly ran out of ideas…so I did what anyone in my position would do and moved onto the next puzzle… but in the back of my mind I kept playing around with the odd idea or two… and the next morning I’d come up with a plan that I was thoroughly delighted to find actually enabled me to slide the lid home with everything neatly inside the box… my favourite puzzle in the Design Competition and also the one puzzle I’d save.(*) 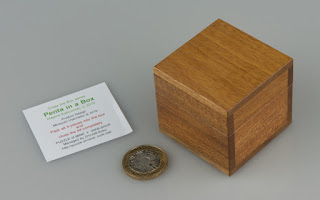 Penta in a Box consists of five pentominoes to be packed inside a neat little box with a hinged lid. Once again we have space inside the box for a 3*3*3 cube, so this time there will only be a couple of cubies spare once the box is closed… the pentominoes are also all different this time, which makes finding a 3*3*3 assembly a little more of a challenge!

Finding one is only half the battle, however… the hinged lid effectively swipes a little bit of the top front row of cubies because of the arc it takes as you close the lid… which is interesting because you know there are only two cubies spare in there, yet the lid will probably stop you using three of the cubies – and while it’s been a while since I did any really serious sums, even I remember that 25 into 24 don’t go good! 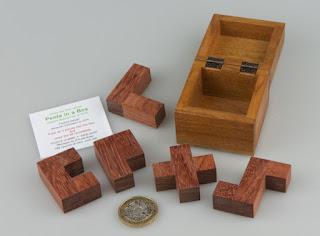 Thankfully there aren’t nearly as many possible assemblies with this set of pentominoes so it quickly reduces to the problem of closing the lid and how you can cunningly remove the apparent constraint.

Another puzzle that needs a bit of thought before the arrival of a massive “A-Ha!” moment…

...and it's not just me who thinks these puzzles are brilliant! - Read Kevin's thoughts over here...

(*) At one of my earliest IPPs one of the veterans asked me which puzzle that I’d acquired over the course of the magical few days I would choose to keep if I was only allowed to save a single puzzle? It was a brilliant question! And one that we generally discuss every year now… This year it would have to be Slide Packing!
Posted by allard at 21:13

Email ThisBlogThis!Share to TwitterShare to FacebookShare to Pinterest
Labels: IPP Design Competition, Mine