Peter Hajek hosts a cracking puzzle party at the end of each year where he invites puzzlers from around the world to submit their best puzzle (-related) finds of the year… those that can attend in person present their choices to the assembled puzzlists and then Peter combines those and his written submissions from around the globe to pull together a fantastic little booklet, which is then available to (only) those who have submitted something. I’ve been lucky enough to go along to a few of these now and they’re a wonderful opportunity to catch up with friends from far and wide (there’s usually a few Netherlanders there!), puzzle a little, see some impressive magic and eat a lot!

This year was no different… a couple of days after Christmas, I headed down to London and enjoyed the wonders of English traffic that added an hour and a half to my journey… good thing I set off a little early! When I arrived (late) I received the usual warm welcome from our host, which was even warmer after I’d pulled out a couple of Gill’s walnut cinnamon swirl cakes (they went down quite well during the course of the afternoon/evening).

I grabbed a drink and set about wishing everyone a Merry Christmas and catching up with puzzlists I hadn’t seen in a while. Oli, Shane, Big Steve, Wee Steve, Tim, Joop, Wil, Laurie and Ethel, Gerard, Clive, David and Louis had all beaten me there so I had a lot of catching up to do… having dispensed with the greetings, Peter herded us all into his living room for the show and tell session for each of us to present our finds of 2016.

This year Peter had introduced a possible fourth choice – if none of your three main choices were a commercially available puzzle… which was handy if you were struggling to whittle down your puzzle finds of the year! 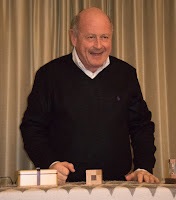 My three picks for 2016 (plus a bonus commercially available puzzle) were:


Another of Jane Kostick’s wooden wonders from me this year: Quintetra is a ball-shaped object made up of 30 identical pieces held together with magnets. Inside is a triacontahedron box made up of six identical panels held together by magnets. Inside that box is a great little packing puzzle consisting of twelve identical, if oddly shaped pieces of wood, and a wooden cube, all of which need to be placed inside the box. Fiendish! 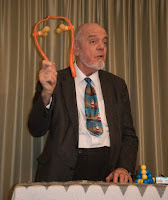 
MikeToulouzas’ Fairy’s Door is really special – it is a thoroughly beautiful object and a delightful puzzle that won the Puzzler’s Choice award at IPP34! Broadly speaking, it’s a puzzle box with an exquisitely detailed Fairy’s Door on the front of it. (Stunning details in the distressed panels and wooden hinges.) Finding your way through a series of puzzling locks is a whimsical experience until you’re finally able to open the box and reveal the surprise inside. 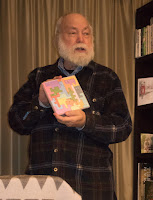 
From the slightly twisted puzzling mind of Ken Irvine comes Little Bruce – the successor to Little Kenny. Four simple pieces, a couple of spare voxels inside somewhere – lots of ways to assemble some of the pieces – and no way in heck of getting the final piece into the right place… it definitely requires some Think©ing and it rewards experimentation and rigour… and everyone I’ve given it to so far has not only solved it, but enjoyed solving it… you can’t really ask for more than that!


A thoroughly unconventional hedgehog puzzle from Radek Micopulos – definitely a puzzler’s puzzle that will amuse even the most jaded of puzzlists. Each end of the cage has an embedded (swivelling!) ball bearing race in it… giving it a brilliantly industrial look. The spiked ball is clearly(!) too wide to get between the bars on the cage, and the spikes are too long to permit any sort of passage through or around the bearing races…


After the puzzle presentations, we all tucked into Peter and Katja’s wonderful dinner spread (it’s always terrific!). Some of us had several goes at it and it was brilliant… and after supper Clive treated us to a highly entertaining if somewhat self-deprecating magic show – in spite of his own protestations he was both highly entertaining and mildly baffling. (Thanks Clive!) 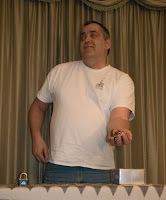 Post magic there was coffee and (more!) cake (have I mentioned Gill’s delicious walnut and cinnamon swirl cake?) alongside gentle banter and sociable puzzling. 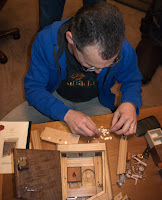 Some highlights that won’t easily be forgotten: I now know exactly where Wally is, the look on Gerard’s face when Louis decided his Goblin’s Door wouldn’t be fully solved until the solid silver coin jigsaw had been scrambled and reassembled, Steve’s spontaneous disassembly of his Parsellus (sp?) puzzle during his presentation and Wil’s presentation taking the Michael out of Clive after they’d both nominated the same wonderful little Karakuri box.

Another superb EPP thanks to Peter and Katja’s excellent host-age. 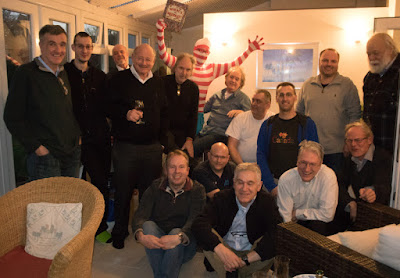