One of my favourite exchanges at IPP38 was the HoKey CoKey Lock – not just because it’s an awesome puzzle, designed by my mate Ali – but because of the nature of the exchange process: Derek had agreed to assist Big-Steve in the exchange before he really knew what he was in for. Once he was committed, Steve told him there would be dancing involved – for he had decided that he had to dance the Hokey Cokey with each exchanger during the course of the exchange… Steve hadn’t really thought this through – there were 78 of us in the exchange – and that is a lot of dancing!

While I got on with my exchanges, I would notice a bit of a commotion every now and then, along with a little singing – way off-key – and a lot of laughter – and Steve was invariably in the centre of it, putting his legs in & out & shaking all about, and waving his hands in the air before he would part with a copy of his exchange…

Derek had been told that if any of the other assistants joined in the dancing, he would have to join in pronto, and look like he was enjoying it! [History does not record how many times Derek was required to perform, only that Steve was thoroughly knackered after the entire performance. 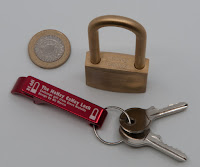 My turn arrived and we duly danced the night away - or ran through a single verse of the HoKey CoKey quite rapidly and in several different keys – but I had my HoKey CoKey lock – and I’d earned it!

Right, back to the puzzle: it’s a rather handsome brass padlock, stamped prominently as “HoKey CoKey” and it comes provided with three useful tools – four if you count the keyring – don’t count the keyring.

The first tool looks remarkably like a custom-printed bottle opener, the second and third look remarkably like padlock keys – which is probably what they are, so at the risk of potentially adding in a little spoiler [RELAX JOHN! I’m not!] let’s call them the HoKey and the CoKey…. Seewhatididthere?

Explore the puzzle – spot that the hasp can be pushed in a bit and pulled out a bit – yup, it behaves exactly like a lock!

Insert a key and turn it… behaving less like a lock now – lock does not open.

Ah, clearly you’re using the wrong key – yes, HoKey and CoKey are NOT identical – try the other. 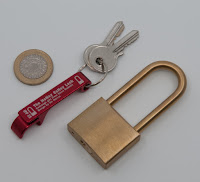 You don’t need to be a rocket surgeon to know what I’m going to say next: NOTHING HAPPENS… but if you listen very carefully you can hear the gentle laughter of Messrs Morris and Nicholls chuckling at the fact that you actually thought they’d just given you a padlock, and not A SERIOUS PUZZLE.

From there on you’re in for an absolute treat – this thing’s fun and clever and beautifully made.

If you won’t take my word for it – read Kevin’s take on it over here.