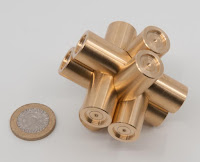 Two of my mates – Big Steve and Ali (who’s also quite big, but we don’t have a wee-Ali problem) have recently begun selling some rather nicely made brass puzzles. Some of them have been sold through Puzzle Paradise, and then more recently, they’ve opened an Etsy shop for their wares.
Shortly after IPP, Big-Steve gave me a prototype of a standard design burr made of some rather weighty brass rods, and asked me what I thought of it… as it turned out, I thought some really good things, and duly gushed a little – and told him he owed it to puzzlers everywhere to get them made, in quantities – and he has.
It turns out that Steve and Ali have some ideas for a series of these little guys that all look identical, but aren’t at all…
The first one in the series – Brass Monkey One - that prototype I mentioned – has a key piece with a sprung ball bearing that helps lock the last piece in place, assuming you build it right and put the corresponding little dent in the right place. Remove the key piece and it sort-of auto-dismantles unless you’re holding the remaining bits carefully. 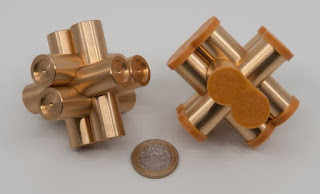 Reassembly is a trifle tricky but once you work out the best way to grip the pieces as you build it all up, and put that dent in the right spot, it becomes fairly straight-forward. So much for Brass Monkey One – how about Brass Monkey Two?
Number two in the series arrived at the last MPP… I forked over some cash and received what looked like a carbon-copy (brass, actually!) of the one I already had… same size, weight, same finishing on the ends – everything looks the same. It does not however work the same. I tried for quite a while to find the key piece – I did not have much success.
It took me quite a long time of playing and trying various little strategies before I chanced upon something that was actually of any use at all – and that discovery put a large grin on my face: if this is the second in the series, then I can’t wait to see where they are going to be taking it.
Brass Monkey Two looks identical to its older brother – which, by the way, is an achievement. The machining on these puzzles is really first class and there are no clues to be found to the solution at all. 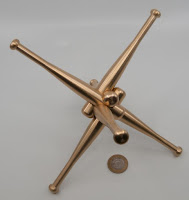 The lads have also been busy creating a stunning brass version of the six baseball bats puzzle which they've dubbed the Heavy Hitter. They’ve come up with their own notching for the pieces and made it in six inch baseball bats – once again the machining is excellent and the sprung ball bearing secures the whole thing  in spite of the length of the pieces. 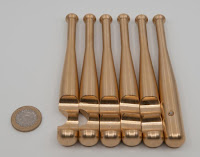 It’s a nice big statement of a puzzle that makes one almighty racket when it collapses on the desk – which it will do rather neatly if you twist the key piece and allow gravity to take over – please don’t try that on a glass table!

If you like your puzzles heavy and gorgeous, take a look at the lads’ Etsy store.