IPP39 - The Journey to Kanazawa 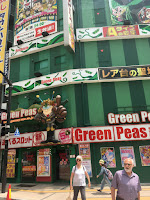 We began the journey to IPP39 the day after one of the hottest days of the year in the UK - good practice for our time in Japan you might think... problem was that the UK seems to grind to a halt when the weather gets good, and to be fair, when it gets cold, or snows, or we get the wrong kind of rain. Anyhow, turns out there were some thunderstorms that night, which play havoc with air traffic, so there’s a little pandemonium at Heathrow from the get-go. Then a lightning strike takes out a key radar station for a while and a bunch of flights get cancelled - we’re just delayed a bit... and BA duly flies us over the north pole to Narita. An hour on a bus and we’re safely at our Tokyo hotel where we allow ourselves a couple of hours sleep to make up in part for the lousy night’s sleep on the plane, and the fact that we’ve lost about half a day en route. 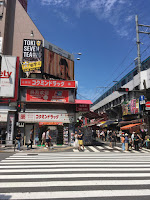 We find the Bobroffs checking in down in the lobby and make plans for some dinner. We eat at the hotel cos it’s convenient, not because it’s cheap... Nancy and Rosemary join us for dinner, having arrived from Boston just as we were heading for the restaurant. Some puzzles are duly exchanged - Saul gives me a copy of his Working Man puzzle - a fiendish little disentanglement that keeps me amused all through dinner... and for a while later upstairs in the room. When I do find the solution, I have to laugh at myself: my assumption about the solution path turns out to be totally wrong and when I finally get it, I realize it’s exactly like another puzzle I’ve been fiddling around with recently. In turn I taunt Saul with a copy of Siebenstein’s 4 Pfeile which eludes him at dinner, and for a few more meals over the next few days. 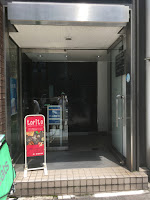 We agree that the next morning the puzzlers are heading to Torito- it’s da law after all! Gill takes the non-puzzlers off in search of fabric and crafting supplies around Shinjuku and we grab a metro in the general direction of Torito. We manage to navigate the underground successfully and don’t lose anyone on the long trek to puzzle heaven. We’re greeted like long lost friends from the other side of the world when Meiko sees us.

Saul, Rosemary and I are soon raking through puzzles and finding hidden treasures when a familiar face pops out from the room next door: Kofuh is setting up for a puzzle exhibition and he does the rounds saying hello to everyone and making sure we’re all well. He hands out his latest business cards which, true to form, have a new puzzle embedded in them - quite a cute little puzzle -very Kofuh! 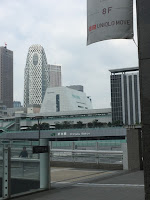 A little later while we’re still browsing, a big booming voice announces Dor’s arrival, with his friend Zohar, an IPP newbie. Introductions duly made all around, everyone goes back into puzzle hunt mode. I find a couple of shelves packed with puzzles from Endo-San so I work my way through them fishing out all the puzzles I haven’t got... turns out there were quite a few in there that I didn’t have! At one point I stray across a closed cabinet and Meiko points out that those are pre-loved puzzles... I help myself to several from there as well. I find copies of all the Hanayamas I haven’t got yet: BramVesa’s Slider and the entire Ultraman set of puzzles. I’m somewhat chuffed with my haul as it includes a bunch of older Endo-sans that I’ve never even seen before - puzzle heaven is definitely worth a visit!

Rosemary heads back to the hotel via cab and Saul and I join Dor and Zohar in search of a toy shop which is sort of up near our metro station. We wander through the Ueno market en route - massive overload on the senses - the toy shop has a decent array of Hanayamas but not much else, so Zohar just ends up buying some toys for his kids. 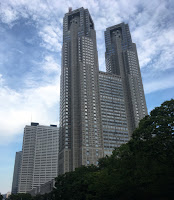 Saul and I head back to the hotel, via an ice cream vendor cos it’s hot and heavily humid - and I’ve gone soft from my time in Africa.

The fabric and fibre folks have had a decent shopping trip as well and I spend a couple of hours chilling and working my way through the new puzzles from Torito. Gill and I head out for a wander around the Shinjuku park behind the hotel, surprised to see a bunch of little turtles happily swimming around the pool at the top of their water feature - cute little guys! Several local folk are walking their hounds in the park and all is well in the land.

We head out for a meaty dinner and pronounce it good, if not entirely local... so good in fact that we decide we’ll probably head back there the next night too.

Next morning, we head off to east Shinjuku for a trip to Tokyo Hands and an excellent bookstore where Gill finds copies of one of her friend’s books for sale - quite chuffed she was. The walk through Tokyo Hands is always fascinating, the sheer variety of stuff available literally beggars belief -things you didn’t know existed but find fabulously useful are available in every size and colour ... 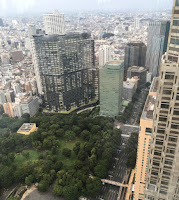 We totally fail at finding Paulette a local football strip for her grandson, but she forgives us eventually. Before dinner we head up to the 45th floor of the Metropolitan Government Building’s observatory for a brilliant view of the city... it is ma-hoo-sive.

We meet up with Marti and Frans - he fresh off an overnight flight with no sleep and a full day’s running around Torito (where I suspect he hoovered up all the Endo-sans that I didn’t) and Tokyo Hands (where he bought 3kg of exotic hardwoods from around the world... as you do. We all head back to the same restaurant for some supper - it had been deserted the night before, but this evening it was absolutely rammed - turns out it’s quite popular with the locals for a meal and some drinks. They find us a couple of tables for four next to each other and we settle in to another great meal... Frans isn’t too happy as the picture showed a much larger plate of meat than he gets, but he manages to put away Gill’s leftovers and half of Marti’s food - so I think he had enough in the end. Frans and Marti head back to the station to find their hotel and we head back to ours via the local 7-11 for an ice cream - something that seems to have become a bit of a tradition - blamed on the Bobroffs. 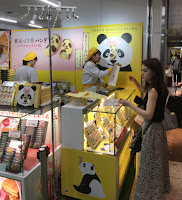 We grab breakfast the next morning and then get a minibus taxi to take the six of us to Tokyo station for our Shinkansen to Kanazawa. Gill and I are quite excited at the prospect of our first trip on a Japanese bullet train and we’re there in plenty of time, which lets us gape at the variety of fast trains pulling in and out of Tokyo - I’m definitely not a train spotter but even I can’t help myself from taking pics of the Hayabusa that pulls in and out just before our train is due. 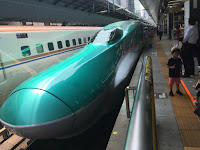 The train ride to Kanazawa is wonderfully smooth and quiet - these guys do good train.

We glide into Kanazawa station perfectly on time and wrangle everyone’s baggage on to the platform before navigating the short walk to the hotel. The rooms are great - we decide they’re the best IPP hotel rooms we can remember and unpack our lives for the next week... some clean clothes and plenty of puzzles for him, crocheting and a bit more clothing for her...life is good.

We head across to explore the station concourse and adjoining building in search of somewhere for dinner - the choice is staggering and by the time we get back to the hotel Big-Steve and the Udall’s have arrived and are waiting in the lobby - puzzling ensues, after warm greetings of course! 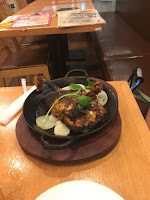 We head on over to a steak joint where Saul breaks his no-salt rule a little bit, but the steaks are really good and the company is excellent - I’m among my tribe again.

There’s fun and games after dinner when we try and find the fabric store that Steve’s spotted earlier... he knows exactly where it is, several times, and then we find it by accident in entirely the wrong place!

I get a luxurious ice cream cone and we wander back to the hotel... where we fade, having had a pretty rough night’s sleep the night before.