Next morning we find Big Steve at breakfast and feast a little - the hotel has a goodly spread...we’ll definitely be ok here for a few days! After breakfast we head out on one of the loop buses in the direction of the gardens, stopping off at a few lovely little shops along the way, and a stunning gallery of local pottery with prices to match. The gardens are gorgeous, but it’s rather warm (low thirties with massive humidity!) so we find ourselves gravitating toward shady areas and open ornate sided structures. 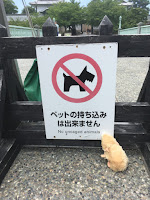 From the gardens we wander across to the castle grounds and take a few opportune photo stops with Erical- raising a few eyebrows from some passing tourists at one point, so I say “if you have to ask...” and they grin... and I suspect that they’ll be telling some amusing tales of weirdos at the castle with plush toys later in their hotel bar.

We head down into town and find a little noodle shop that rather helpfully has an English menu. Gill gets the daily special fish and Steve and I each had a cold soba noodle dish with grated radish - all quite delicious... had to smile at the wonderfully hi-tech ordering systems in use in Japan: mostly little tablets that automatically tell chef what to cook - this place was even more direct: our waitress repeated our orders at the top of her voice and chef just got on with cooking it from the kitchen about three meters away.


On the way back to the hotel we spotted a sign for TokyoTokyu Hands and got off at the next stop, unable to miss any opportunity to wander round and wonder at the amazing things in there... we found a Snoopy cable charm for Gill and some dodgy hamster pics for our fellow fellows back home - somehow Steve managed to resist the urge to buy a battery-operated beer frother! 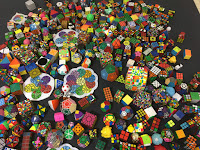 Back to the hotel via the underpass where Kofuh and his buddies were starting to set up their puzzle exhibition - a few quick hello’s before we felt the need to stop bothering them so they could get on with their set-up.


Back at the hotel we find Nick’s already got the Design Comp room set so we have to wander in... Nick and I catch up - it’s been a couple of months’ since we’ve seen each other! I spend a little time fiddling somewhat unsuccessfully with the puzzles on show - I fear my butt may be thoroughly kicked again this year!


Registration opens and I manage to be the second in the queue and get hooked up with the magic badge that gets me into the coolest party in town... and a bright yellow polo shirt to stand out in the crowd and 100 puzzles that have arrived safely from Germany. (Sadly, my customs fetish has followed me around the globe and I owe $120 in ransom fees.)

I lug the puzzles upstairs to the room and then settle back into letting the puzzles in the design comp kick my butt, while catching up with my mates from around the world... I’m definitely back among my tribe again!


A bunch of us gather downstairs in the lobby and head out to the mall across the way in search of some dinner. We settle on a Katsu-joint and the food is excellent - the company’s not too bad too!


After dinner there is a lot of puzzling in the Design Comp room - not a lot of solving in my case, but a lot of puzzling. Puzzlers from around the world keep rocking up: Brian and Kellian have had a stunning trip around Japan already, and Brian and Sue have had a wonderful cross-country road trip with the Obsivacs... although Brian was a bit miffed that there was a sign saying no animals and there were a bunch of Snow Monkeys running around wild at one of the parks they visited - there was no snow in sight, and the monkeys were moulting so they looked a bit mangy - still quite magical though! It was quite funny hearing Brian’s description of the scene though! 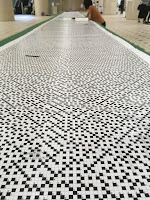 I crash at a semi-reasonable hour because I’m on assisting duty for the start of the SOAPs fabric and fibre tour in the morning.


IPP-folk seem to be dominating the breakfast area - it seems a bunch of folks have arrived overnight and we’re getting up to full strength days before the main event even kicks off!


We gather the SOAPs and their hangers-on, take their money and then Gill shepherds them all onto the bus that carries them from one craft store to another for the rest of the day... I lurk around in the lobby for a while in case any stragglers turn up late - that way I can point them to the first rendezvous spot and tell them to cab it there... turns out the rest don’t show up at all - hey ho. I do get the chance to chat to Jose about their trip over via Seoul, and their trip home on the Trans-Siberia express, which sounds like the stuff of dreams!

I head back up to the room intent on sorting out many exchange puzzles, only to be turfed out the room by housekeeping - actually, they’re just an excuse to head down to the puzzling lobby to chat to mates... I get to confuse Big-Brian with 4 Pfeile and we share amusing stories about the political similarities between the USA and the UK - we’re not particularly PC or complimentary about their current leaders or the likely future, but we do manage to amuse ourselves a fair amount. Andreas has a go at one of the Masyu puzzles in my Puzzle Ninja book and makes short work of it - I’m not surprised - the man has a brain the size of a planet! 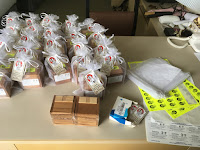 I meet Gergo from Hungary - having seen him looking forward to his first IPP it’s great to be able to chat to him right at the start...turns out he’s keen to come over for an MPP - EXCELLENT!


After a goodly while of chatting and puzzling I head back upstairs and spend the next few hours putting stickers on my exchange puzzles and then tying them up in bags with labels on them... and then packing virtually all of them into one of our large suitcases ready to be taken down on Saturday morning for the fun that is the Edward Hordern Puzzle Exchange. 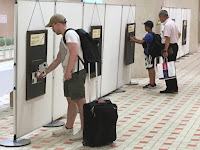 At some point the Jury makes up their minds and the Design Comp room is opened for the rest of us to get back in and puzzle on... so we do. After a while Nick feels the need to tap up the pancake place we’d seen the night before that we couldn’t do justice to after the Katsu meal, so Brian joins the two of us and we stroll over toward the mall, stopping off at the underpass to visit the public Puzzlefest once more.

We feel the urge to build one of the giant cubes and we’re somewhat chuffed with ourselves when we put the final block in place to complete the cube so there’s a little whooping and some high fives - almost as much as you’d see later on Telly from Brian when he solved it and celebrated, only to find that he was being filmed for a slot on the local telly. Brian points me at a smaller cube assembly he’d been trying unsuccessfully earlier that day - I have a quick bash at it and manage to fluke it rather quickly so he hurls some torrents of abuse in my direction... definitely back among the tribe! We finally get over to the pancake joint and order a couple of happy pancakes with chocolate and ice cream - Brian can’t touch any of it so he’s reduced to sulking over a coffee... we tell him just how good it is quite often. Gill joins the three of us when her Fabric and Fibre (no Marc, not fruit and fibre) tour returns and she promptly orders one of the same and tells Brian what he’s missing too - it is a conspiracy! 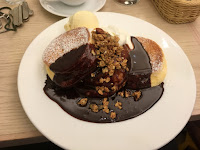 Having polished off three huge fluffy pancakes each, we decide that it’s not a case of them spoiling dinner, it’s rather a case of them becoming dinner... so we head back to the Design Comp room and we puzzle and banter until I decide it’s time to crash... some of the others who shall remain nameless (or Big-Steve, Iwahiro and Dirk if you want to pick some random names) may have stayed in our lobby area until 4am - I’m too old for that sort of thing!
Posted by allard at 08:27