This is more my kind of puzzle!

Euklid wasn’t a lot of fun – at least it wasn’t for me: I spent ages on it and was quite chuffed to find a single solution… only to be told by an American that were stacks of solutions!

My bubble was burst!

Any possible sense of achievement totally shredded… clearly, I wasn’t up for the serious challenge that was Euklid.

Euklid for Kids, on the other hand, sounds more like my kind of level – I’ve always thought of myself as a kid, just one who’s toys haven’t been getting cheaper as he’s gotten older.

Once again, from the evil genius that is Dr Volker Latussek, this puzzle offers you three different sized wooden blocks and invites you to place them all inside the box beneath the two lips that every-so-slightly restrict the opening.

Sure – no problem – until you actually try and do it. 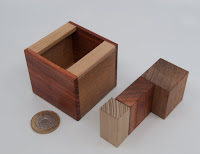 Those blocks are all rather awkward sizes – and they interfere rather deliciously to stop you doing anything that your brain might tell you could possibly be helpful in trying to get them all into the box. Not only that, but there are some rather subtle differences that mean that sometimes things work and other times they don’t… if you aren’t paying attention to orientation.

Pay attention and you’ll probably convince yourself it isn’t possible… GREAT! NOW we can start actually solving this thing…

It’s always worthwhile testing a few of your assumptions – especially the ones you haven’t even realised you’ve made. I found one or two assumptions weren’t quite right and promptly went off down a rabbit hole in search of a new solution – none came.

With a little playing around you’ll establish how to get the blocks to behave consistently, and you’ll almost certainly have a very good idea of where you want them to end up… getting them there, as they say, is the challenge.

One sneaky little idea and a bit of experimentation proved to be exactly the right approach – with the Pelikan guys’ tolerances only just letting me do what I was trying to do and everything dropped perfectly into place… with heaps of rattle-space all around!

Right sort of number of pieces, right sort of level of challenge – definitely my kind of puzzle.