We held our fifth virtual Midlands Puzzle Party last weekend and got to spend time with our puzzling friends from around the world – I really like the way we’ve been able to meet up with old friends around the world and make some new puzzling friends even though there are all sorts of restrictions on travel and actually getting together in the real world. For some of us these virtual gatherings really have been a bit of a silver lining – so thanks to everyone who’s been coming along for the chat and especially to those who’ve been contributing!

This time around we decided to flip the schedule around a little so that we could subject our afternoon audience to one of Frank’s quizzes. (Why shouldn’t they have to suffer like the other sessions have?!) So we had some general puzzle chat in the morning session, Frank’s latest quiz and some impromptu puzzle identification in the afternoon session, and then the evening session was given over to an update from George and Roxanne on the world’s biggest puzzle unboxing ever, and Big-Steve doing the scoring of the scavenger hunt we’d run during the course of the day.

The morning session saw about twenty-five of us literally just talking about the puzzles we’d received recently, what we were puzzling on and what we wanted to recommend to our friends. It probably won’t come as a big surprise that Brian’s Abraham’s Well got a LOT of mentions during the course of the morning – it felt like every second puzzler was wanting to talk about it and tell everyone how much they’d enjoyed it – amusingly, virtually every single one of us was still searching for the more elegant solution to one of the main steps, and we all had a good laugh about some of the approaches we’d heard of – Ali definitely took the cake!

Juno’s Sequential Discovery Cubed Box also got several mentions with everyone agreeing that it’s a wonderfully FUN puzzle to work through – there aren’t any sections that really require any hard work and some of the tools are a joy to experiment with and then use… invariably there was a conversation about how tricky it’s getting to acquire some of these puzzles with most folks just really grateful they’d managed to somehow get their hands on one.

Rainer’s T13 got several mentions too with everyone agreeing this was another masterpiece and a proper puzzle – nobody had managed to just blast through it – everyone had spent days and weeks solving it the first time.

Derek’s latest helical Polar Burr got several mentions and at least one of us had to hold up our hands to not being able to even disassemble their copy yet, let alone actually solve it!

One of the absolute delights was when Jack showed us his contribution to Gwen’s Puzzle Cave Chest project – stunning work Jack – congratulations!

In between serving customers in the shop, Tomas spent the majority of the day working on his green Revomaze – his first Revomaze. Some of us tried to suggest that he should map out the maze but he felt that was cheating so he was wished good luck – he’s going to need a boat-load of it with that strategy. :-)

Michael D shared some of the work he’d been doing on tessellations and grudgingly admitted that he’d been awarded the inaugural Ray Bathke Puzzle Design award earlier in the week at the first Camden Puzzle Party in absolute ages – congratulations Michael! His wife managed to fish out the trophy so he could share it’s punny design with all of us – it’s a big wooden key with a bath at one end… think about it.

Peter told us all about the puzzles he’d been playing with recently and then showed us a new puzzle from Dick Hensel and invited us all to get in touch with Dick if we were interested… I certainly was!

We told everyone about the slightly tweaked puzzle scavenger hunt for the day – apart from the usual explicit descriptions, there were a couple of encoded clues to be deciphered as well as a few slightly hidden clues thanks to some excellent suggestions from Nick! We published the sheet and invited all comers to submit entries to Steve for the evening’s judgement. (There’s a link to it from our Facebook page if you want a look-see.)

After a break of a couple of hours we re-joined for the latest of Frank’s Puzzle Quizzes -this time with the promise of actual prizes for the winners. Brian and Sue had donated a copy of Ten of Diamonds and I’d laid out a few things from my drawer of duplicates…

Frank took us through the quiz, featuring the odd pun (literally!), some puzzle-related questions and some tests of elementary arithmetic (I failed horribly!) and by the end Marc won himself the Ten of diamonds, Goetz bagged a recent Endo-san creation and Tamsin won herself a copy of Gobi by Eric and Alfons.

We hadn’t planned much for the rest of that session so we had a little bit more chat with some of the folks who hadn’t been there for the morning session and we lapsed into a spot of puzzle identification – I failed miserably at getting three of the puzzles I’ve been trying to identify for a few months now (admittedly I haven’t been trying that hard!). We manage to identify a whole pile of puzzle boxes that Roxanne needed identifying leaving only one or two still unidentified in the end.

George and Roxanne gave us a superb tour of the Puzzle Palace Museum after they’d managed to unpack all of the puzzles from James’ collection into their new dedicated museum (except for the ceramics that needed to wait until the shelving and the loading system were ready!). Given that earlier this year that transfer had only just been agreed and the packers hadn’t even started packing anything into the 729 boxes until late March(?) – and the containers spent a couple of months at sea – that is a phenomenal effort!

(Rox admitted she’d kept George up working on the unpacking until 1am on the day so it would all be done in time for our “visit”!)

They took us from room to room showing how they’ve got literally everything displayed and ready for play in line with their ethos for the collection – it’s there to be played with! 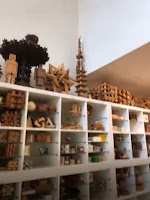 There was a follow up on the interesting conversation about cataloguing the puzzles with George talking about his plans to create his own database and then potentially allow others to use the same database to store information about their own collections on it – forming the beginning of an uber-database of puzzles available as a public service for anyone interested in researching them.

After the thorough tour (thanks guys!!!!) and the invitations to visit and either help with cataloguing, repairing or just playing with puzzles, we moved on to judgement day for the participants in our scavenger hunt. This time we had a handful of entries – some of them more complete than others!

Ken’s entry was quite light in terms of actual content, but he did lay on the Brass Monkey pandering (which I believe is illegal in some states!) rather thickly - in spite of that he didn’t score very highly – perhaps the pressure of having actual prizes was playing with Steve’s playfulness (ironically something else that’s illegal in some states!).

We’d lost Brian by then so I ended up having to talk through his entry – not being privy to the man’s thinking I ad-libbed a bit but found myself getting somewhat distracted at one point (or should that be two?). 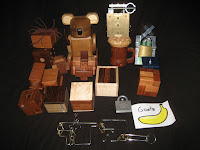 In the end most folks had managed to find some of the hidden clues, but every single person missed the requirement for a Hamster Poem, so Steve launched a quick-fire deciding round and the in the end Tamsin took the spoils with her hamster ode. 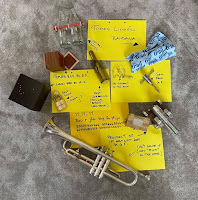 …and that was the fifth Virtual MPP… links to the recording of the sessions below for anyone wanting to re-live the sheer terror of the day, or see what you missed. (OK, it wasn’t really that terrifying… more mildly amusing, with puzzles.)