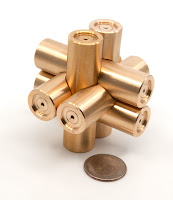 You should all already know all about Peter’s Annual End of year Puzzle Party (EPP) – he’s been running them for years and I’ve blogged about them more than a few times in the past… the last Thursday in 2021 saw 30-odd folks (yup, some of us are pretty odd! – I might as well get in there before you do…) gathering from literally around the world via Zoom to present our top three puzzling acquisitions of 2021 and enjoy some gentle banter and light entertainment.

We started off with some general catching up given that most of us haven’t seen one another in real life for about two years now. There was some housekeeping (generally begging everyone to put themselves on mute when they weren’t actually talking -wanna take bets on how well that went?!) and a rough run through of the agenda before we launched into each presenting our top three picks.

I abused my chair’s privilege to go first and introduced my three top acquisitions of the year as:

Brass Monkey 5: This was easily the puzzle that has given me the most joy this year – firstly in solving it (I literally cried with laughter) and then chatting with friends around the world as they solved it. If you don’t already know what all of the fuss is about, you need to get one!

Sequential Discovery Cubed Box:  Juno manages to cram a wonderfully whimsical journey of discovery into an innocent-looking wooden cube. The first move is a delightfully insistent invitation to play – it just gets better and better. Some wonderfully innovative tools and locks lead to the final compartment with plenty of puzzling pleasure along the way.

Jack’s Tippenary Mystery Tour: A veritable Tardis of a puzzle box – Jack has literally broken the laws of nature cramming all that puzzling into a box this small. A series of challenges results in the appearance of a badly-behaved old friend you may have been expecting – work out why and you’ll discover even more.

This year Peter had once again allowed us a fourth nomination for a commercially available puzzle and I used that ticket to nominate Abraham’s Well: Brian Young’s latest sequential discovery tour de force. Peeling back the layers of this onion will give any puzzler a massive sense of achievement – finding a way to do it with virtually no force whatsoever is the crowning achievement. Brilliant engineering meets superb craftsmanship in this elaborate, yet compact, challenge. 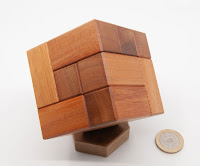 From there I did my best to step between all of the puzzlers from Japan in the east to the US west coast… with everyone presenting their top three or four picks, and then giving the occasional shout out to any other puzzles deserving of special mention for others to look into. I’m sure I wasn’t the only one frantically scribbling notes as we went through the pics noting down the puzzles that others thought were awesome that I hadn’t played with yet…

As usual the nominations ran the gamut from simple plastic keychain puzzles right up to some glorious creations costing literally several thousand… yet the one thing they all shared was that they’d made a puzzler’s year – I always like listening to puzzlers talking about why specific puzzles are special to them – whether that be how it makes them feel when they solve them, or how they managed to get hold of something that they’d been after for ages… 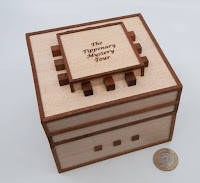 In between the nominations we had a couple of breaks for libations and other important matters. James gave us a bit of a tour of his merely jaw-dropping (remaining) collection of Berrocal’s, 500 selected puzzles and the swaps and spares that didn’t end up in George and Rox’s Museum. At the end of the tour James asked anyone who might have spare copies of any old Pentangle puzzles, particularly the dexterity puzzles, so that he could put together a complete collection of them for his son… if anyone has any, please do get in touch.

After the second break Clive entertained us with an excellent magic effect, and then Angelo Carbone gave us a short talk showcasing one of his newer inventions and explained one of his older ones that uses a rather puzzling box as it’s centrepiece… it’s clear why Peter’s so keen to encourage him to turn his hand to designing puzzle boxes after seeing that explanation.

At the end of the nominations, Peter took over proceedings and announced the winners:

Juno also took the title for Best Designer and for Most Prominent Craftsman – giving him an elegant hat-trick, for the first time in the history of Peter’s EPPs – an awesome achievement!

After the formal proceedings wound down, a bunch of folks hung around to chat a bit more – it definitely had the feel of the final night at an IPP where nobody wanted to admit that it was over for another year… it was super to catch up with everyone for a bit…

Thanks to Peter for organising another grand EPP!