Volker Latussek’s TUTU was the pick of the bunch for me from the Pelikan Workshop’s latest release.

It’s one of those beguiling little puzzles with four simple pieces – 2 pairs of a ‘T’ and a ‘U’ and a 3*3*2 box with a restricted entry in the shape of a T. It’s immediately clear from the pieces and the box that you need to put the pieces (fully) inside the box… and if you count the voxels, it’s clear that there can’t be any empty space in the box – which is great because that cuts down the possible arrangements you might need to test significantly.

It won’t take long to convince yourself that there isn’t a simple sequence that will allow you to simply drop the four pieces into the box, no matter what order you try. 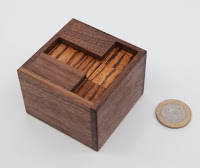 As there’s no spare place inside the box, so you can deduce what the final move needs to be… or at least reduce it to two possibilities! From there you can begin experimenting with possible arrangements to figure out what forms of manipulation are feasible – for manipulations there must be!

What I really loved about this puzzle is the sheer number of times I convinced myself that it was impossible – I knew that I’d worked through every possible set of manipulations and orders and proved to myself that none of them worked… not just once, but several times… proved!

…and then as I’m oft wont to say, having decided it was impossible (once more!), I was finally free to explore something else – something else that indeed allowed me to find the impossible and cram all four bits neatly into the elegant little box… with a huge sense of satisfaction and more than a little “A-Ha!”.

It’s great – and as you’d expect, wonderfully precisely made by the chaps at Pelikan.