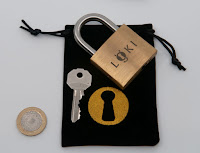 However, since it took me virtually two months of trying to solve it, on and off, this blog post is only seeing the light of day now… well after most people will have bought it, and solved it, and told everyone else they liked it… but here I am anyway, ‘cos it earned my respect… lots of it!

Boaz has impeccable pedigree when it comes to puzzle locks – his dad is almost certainly the undisputed king of modified lock puzzles – everybody rates them by how they compare with the Danlock. Boaz himself has produced some excellent modified lock puzzles using some wonderfully imaginative ideas in the form of BLock and BLock II… so when he announced that he was particularly proud of Loki, we all expected something a little special.

Boaz did not disappoint.

Loki is indeed the very king of tricksters – fooling you at literally every turn – never letting you make much progress without dropping another massive roadblock in your path… and even when you might be tempted to think you’re done, you’re only halfway, trust me!

I suspect that like most folks I made a bit of progress quite quickly – and that little bit had me impressed from the get-go. There is some very classy machining involved here. From there I hit a roadblock that literally stopped me for more than a month… I had some theories about how I needed to progress, but I couldn’t work out how the heck to make them work… until a massive “A-Ha!” struck, ironically as I was describing what I wanted to do to a fellow puzzler – Nigel’s a patient listener!

Finding how to execute that plan, with all its little tricks took another week or two and that gave me what felt like a massive step forward – except Loki’s tricks baffled me once more and it took another few days before I finally had the shackle out! Hurrah! Cue sense of achievement and victory photographs…

…only to be thoroughly crushed when I tried to reset things, and realised that they wouldn’t work the way I wanted them to…

Fast forward another week or two or experimenting this way and that, including making life very difficult for myself in search of a feasible reassembly path… so I did me a THINK (c) and simplified things, and found a way through the morass and had everything back where it had started… leaving me with a profound respect for this little trickster and the cunning man behind it.

As a puzzler you might have seen one or two of the ticks somewhere else, but there are several you’ve never seen anywhere before, and you have absolutely never seen that many of them all in one neat little NABOB-sized package before.

Boaz, you are your father's son and you ought to be extremely proud of this puzzle.