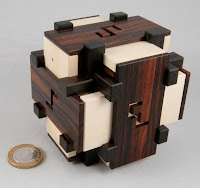 One of the web-sites I enjoy looking through from time to time is Kagen Scheafer’s – and a while go he said he’d be making another round of his rather well-received Maze Burrs (the one that won the IPP Puzzle Design Competition in 2006) – this time around in Cocobolo, Ebony and Holly wood. 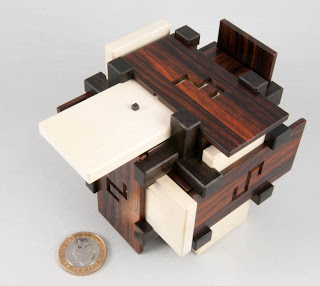 Within a day or two my puzzle-mate Nigel had pulled a group of us together for a bulk order from Kagen and took care of all the arrangements. A few weeks later Kagen let us know that the puzzles were on their way and they duly arrived at Nigel’s place. The timing was a bit unfortunate and all our carefully laid plans of getting together for a grand ritual joint opening (unveiling, as opposed to solving – some of us are a bit slower than the others!) of the puzzles got blown to heck because Nigel was about to go away for the weekend and I was about to disappear on a 2 week cruise – but I did manage to play with it a bit and take some pics before I got on the boat, so here are some thoughts and some pics to show off Kagen’s incredible handiwork. 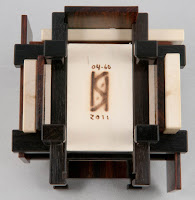 The Maze Burr is basically a cube with a pair of wooden plates on each face: a Holly plate with a square Ebony pin and a Cocobolo plate with a maze cut into it – the sets of plates engage into an Ebony framework that allows the two plates to move at 90 degrees to one another (maze / pin plate permitting, of course). The edges also interfere with one another depending on how they are positioned. The way the internal frame is designed, there’s space in there for an extra six maze plates ... two of the maze plates have an extra channel cut in them to allow the plate to be slid all the way on or off - depending on which maze plates are used, and how they’re oriented relative to one another, you can either give yourself a pretty simple challenge, or a really tough challenge.

It’s all in the details – I’ve already mentioned that the maze pins are square – and in fact all of the mazes are cut with square corners – now I’m no craftsman, but I suspect that that little detail added significantly to the complexity of making up these guys. On the back of the Holly plates, Kagen’s added a cork pad so that the back of the Holly plates don’t scrape against the Maze plates not currently in use ... and at the same time provide the right amount of pressure to keep the maze pin properly engaged ... it’s all in the details – very nice work.


Kagen provides a booklet with each puzzle that not only gives a brief history of the puzzle but also a number of suggested constructions along with their solutions courtesy of John Rausch. 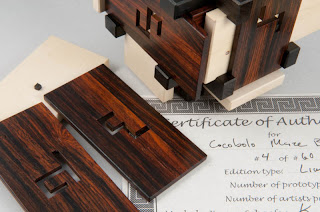 I’m not sure if he’s done this with all of the puzzles in this batch, but mine arrived well and truly locked up in a configuration that requires 89 moves to solve. Nice guy, Kagen!


I’m looking forward to experimenting, as I reckon that’s where a puzzler can really have a lot of fun coming up with new and interesting constructions and solutions (requiring anywhere between 7 and 116 moves to open, or close) – the good thing is that because you effectively have to lock up the puzzle from an open position, you know that any configuration that you can close up, you can definitely re-open again. (I always worry about locking up a puzzle unintentionally and then ending up with an expensive paper weight!)
... Kagen still has some for sale over here if you're tempted ...
Posted by allard at 20:40