Half full, or half empty? Nope, Always Empty! 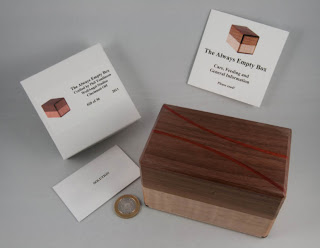 Several better bloggers than me have already written up their thoughts on Phil Tomlinson’s Always Empty Box – Brian over here, Jeff over here and Neil’s over here – so I’ll try not to cover too much of the same ground...
Like all the other guys, I bought mine off Puzzle Paradise on a Buy Out offer after seeing one of them offered on the Australian Relief Puzzle Auction.  Phil’s done a really nice job of packaging up his puzzle boxes and I’m certain that opening the lid on the packaging to find a “Care and Feeding” booklet has put a smile on the face of many a hardened puzzler! 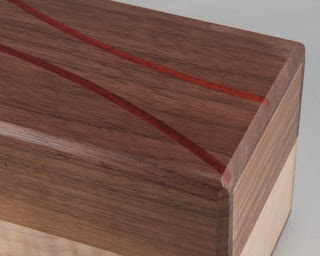 The Always Empty Box is a nice size, and the finishing is top-notch – the inlaid arcs on the top of the box make a beautiful feature and show off some of Phil’s clearly well-honed skills.
As a puzzle, I was expecting something reasonably straight-forward given the description on the auction site, where it was billed as a 3 move puzzle-box ... starting to play with it, the first move almost made itself, with one panel being fairly loose ... but from there progress slowed for a little while – the next obvious move isn’t – you’re going to focus on trying to move something that won’t ... I like it when puzzles send you in the wrong direction like that!
A bit more exploring leads you to the second move that is a lovely little surprise – now that I know it’s there I can spot the signs, but I’ll be darned if I could see them before that... (which is a bit of a compliment to Phil, I suspect) ...it reminds me a bit of one of my favourite burrs (work that one out!). 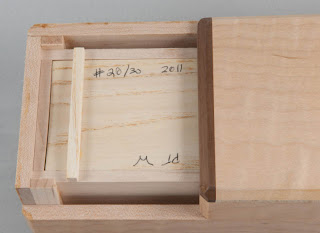 From there the box has one last little secret – not so much a move as a ‘reveal’ – it’s cute.
Right, so what do we think?
Simple. We like it.
... and we hope that we can encourage Phil Tomlinson to do more of the same in the future – as a first puzzle box it’s excellent – I really hope he’ll be sufficiently encouraged to go on and develop more of them – cheers Phil!
[Today’s slightly cryptic sub-title courtesy of some song lyrics as we’re heading for Greece while some of the locals are rioting in the streets in protest at the government’s handling of their financial crisis...]
Posted by allard at 09:44