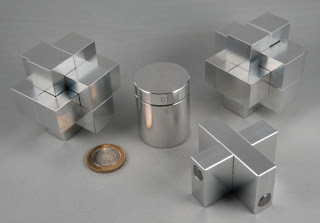 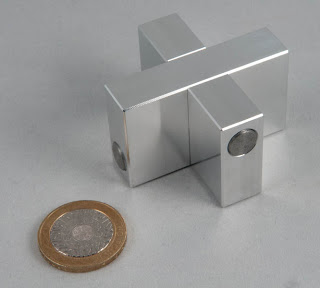 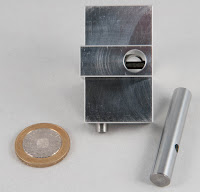 On the outside there are clearly two interlocking aluminium blocks with a pair of rods, one through each piece that appear to be linked, somehow ... with not much giving a clue to how they interact and what you can do with them ... at first the rods don’t offer much movement, but a little fiddling and jiggling will get one of them moving, and then the other, and then you can start exploring the interplay between them and once you’ve got that sussed, you can remove the first rod – which then gives you a bit of a view on the mechanism inside – at this stage you might think that the major part of the battle is over – and you’d be quite wrong ... getting the other rod out is quite tricky and actually had me going for a lot longer than getting the first one out...
Wil’s Cross is a really brilliant puzzle – there are a couple of tricky bits where things sometimes work and sometimes don’t – and working out how to get past them is quite tricky. Wil being Wil, there are dead ends and red herrings along the way ... realising this was the first puzzle he ever designed, he was clearly going to go on to great things, and has ... Thanks for taking us back in time Wil.
Posted by allard at 15:41