Pocket-sized puzzling
It was great having Richard Gain (the Microcubology-guy) join us at the last MPP – not just because he’s a thoroughly nice bloke who likes talking and playing puzzles, but also because he designs and makes puzzles – and he brought a pile of his wares along for everyone to have a bash at them and potentially buy a couple – I bought 5 of them and Richard rather kindly tossed in a tiny 3-piece 3*3*3 cube for nothing.
Richard sells his puzzles on the web through two shops – the Shapeways shop  will sell you the puzzles directly in a single colour, or you can buy them from Richard’s Etsy shop (for a little more) all ready dyed in multiple colours – IMHO that little bit more is well worth it – you’ll save yourself several hours as well as the cost of the dyes etc. 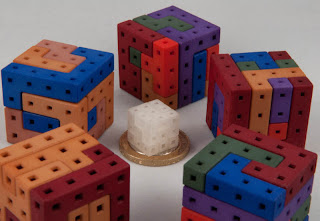 Most of the puzzles in his shop are 4*4*4 cubes with 3cm sides – they’re manufactured using the standard Shapeways laser-sintering process and the pieces are pretty rugged (which turns out to be a rather good thing!). Given their compact size and relative strength, I reckon they make excellent puzzles for just tossing in your pocket on the off-chance that you might a puzzle to play with while you’re out or if you want something to tease / annoy / entertain (delete as appropriate) co-workers with.
Having had the small pile of micro-cubes staring at me from my desk for a couple of weeks, I spent some time last weekend playing with them properly, and really enjoyed myself – bang-for-buck-wise or smile-per-size-wise they are simply tremendous.
Richard has collected a couple of really interesting little cubes here – there are some by Jos Bergmans and a couple of Richard’s own designs. It’s pretty clear from his selection and his designs that he has a rather twisted mind (and you’ll see that I mean that purely in a ‘rotations required’ sort of way!). 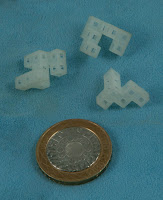 Three tiny pieces is the cute little 3*3*3 cube that Richard was handing out for free to anyone buying his wares at MPP – it’s literally only about 15 mm on a side and requires a little precise manoeuvring - especially when trying to take the last two pieces apart: one move removes the first bit and then another four moves are required to separate the last two from one another. Given its size, it’s not likely to become the most prized puzzle in any collection – but it does demonstrate just how good 3D printing has become – the individual cube building blocks are all hollow and the walls are incredibly thin, yet the pieces are quite solid enough to produce a perfectly serviceable puzzle.

Pivot is an interesting Jos Bergmans design where the name gives a clue as to the movements involved in the solution – yip, Burr Tools may be useful for working out how the pieces might form a cube, but it won’t tell you how to assemble the pieces due to the rotations required in the solution.

Pivot has one unusually large piece that runs almost the entire length of the edges of the assembled cube, making it an interesting ‘feature’ of the solution – and in some senses, placing it to one side and working only with the remaining pieces to solve the eventual placement does simplify things. Once you’ve done that, there should be an obvious last step (if you’re assembling – first step if you’re taking it apart) and a reasonably clear first step – that leaves you a little experimentation to work out how the jiggle the innards sufficiently to allow each piece in and then get it into the right position. Disassembly is a non-trivial exercise given the jiggery-pokery required to moves the bits about to release each successive piece. 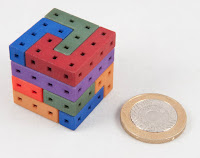 Twist the Night Away is a six-piece 4*4*4 cube by Tom Jolly. Again there’s a single piece that sort of stands out as the one that going to cause the trouble – it’s a complete ring that will make up most of an entire layer of the assembled cube … so once again, setting that aside and building the rest of the cube and making sure that it has a suitable waist for that ring, seems like a reasonable place to start to work out the positions in the final solution. You can eliminate a couple of bits as being fairly straightforward, but that still leaves you with the toughest part of this little puzzle – putting the second piece into the puzzle literally takes a colossal 12 moves – including a very healthy number of rotations!

I used to be a bit wary of puzzles like this requiring rotations, because some of them are invariably “a bit tight” – so I’m not sure whether I’m forcing it to do something unnatural, or whether it really just needs a bit of encouragement. Having spent some time playing with these little puzzles, I’m happy to confirm that the ‘right way’ generally requires very little encouragement of the agricultural sort and rather more finesse – so if you find yourself needing to squeeze things a bit harder than you feel you should – stop and find the better way. Once again, disassembly in decidedly non-trivial – in fact, it’s not a long way off being as hard as assembling from scratch. Nice design, nicely executed. 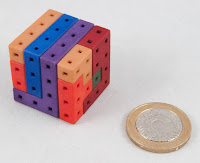 Elevator is another of Jos Bergmans’ designs for a 4*4*4 cube with a twist. Once again, this puzzle has a large awkward piece (a cranked loop) that’s certain to be the major constraint – no surprises there! 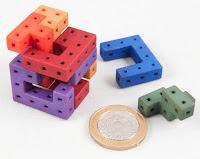 The name also gives a pretty good description of the likely movements during the important stages – in fact you’ll have a decent combination of pivots, rotations and elevator moves all going on at the same time when you get to releasing the last few pieces while disassembling. I found myself chasing my own tail a few times even though I thought I had a pretty clear picture of where I was trying to get to – once again, even though the moves are ‘unusual’, none of them is particularly tight.

The last two micro-cubes in this post were both designed by Richard. “Roll Up! Roll Up!” has some references to not only some of the movements involved in the solution (you’re starting to notice a pattern here, aren’t you?) but also to the Big Top, inasmuch as the pieces alternate in colouring when assembling or disassembling.

Richard’s description of the puzzle points to the two troublesome parts on this puzzle (an ‘H’-shaped piece and a cranked loop) and suggest that you start by combining those two pieces, helpfully noting that it’s “not as easy as you might think!” – Indeed, without any other encumbrances, getting those two bits together properly takes five less-than-obvious moves – again including rotations that Burr Tools won’t help with. The next two bits take a few moves each, but aren’t too troublesome before the final two pieces lock everything together rather securely. Excellent little puzzle that Richard is quite rightly rather proud of. 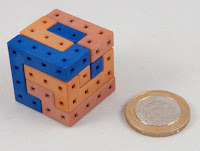 Last but not least is the interestingly named Angle-C – not for its shapes or moves this time (see, I was lulling you into a false sense of complacency!) but because it was designed while on holiday on Anglesey. Geddit?! This one had me scratching my head for ages while trying to disassemble it the first time – I’d found the first piece to remove quite quickly, but then couldn’t for the life of me find the next bit to move … time and again I’d take out that piece, fiddle around fruitlessly, only to replace that first bit and put it back on the desk to stare at me for a while longer … then last weekend I had a real go at it and realised what I was missing – effectively the fit on these little Shapeways puzzles is that good that I’d missed something large right in front of my face – something that Richard’s colour scheme does a good job of disguising nicely, by the way.

That takes care of the next couple of pieces, and the following one isn’t that tough, but it leaves you with a pair of oddly shaped almost-complete loops – and getting them to part company is rather fiddly – you’ll probably recognise the similarities to a standard bent nail puzzle, but the shapes make it a bit more complicated to execute – providing a neat little four-move sting-in-tail for this disassembly … so starting from a set of pieces and assembling it without any ideas of orientation or final position in the solution is a significant challenge. Great puzzle Richard!
POSTSCRIPT: I wrote this blog post last week and since then Richard has entered one of his latest designs (Superstrings - now available from his Shapeways store) in this year's Nob Yoshigahara Puzzle Design Competition at IPP 31 in Berlin, and WON a Jury First Prize Award for his trouble! Well Done Richard!!
Posted by allard at 21:35