It turns out I wasn’t the only person who’s been hassling Wil Strijbos about getting around to making some more Puzzle Bolts for sale – according to Jeff’s blog over here, he’s been doing the same thing for a while too – and it seems our collective persistence (you know who you are – pat yourselves on the back!) has paid off – Wil offered some of his Bolt #3’s for sale recently… 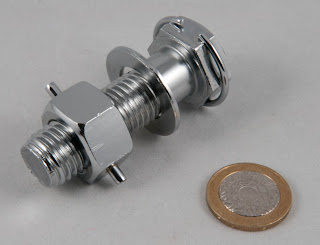 It’s a pretty chunky-sized bolt that’ll do a bit of damage if you accidentally drop it on something valuable, like your toe. That weight gives it an air of honesty and helps disguise its inherent duplicity – it’s a puzzle after all!
And you know that.
But it’s a big, solid bolt, isn’t it?
OK, so what does it look like? Looks fairly straight-forward: there’s a bolt with a nut threaded about a quarter of the way down. Said nut is apparently secured onto the bolt by means of a thin, but rather strong tube, that appears to be secured right through the nut and the bolt itself – either way, the nut can’t be moved (screwed, unscrewed or otherwise – you sneaky person you). Next up is a healthy sized washer (unbroken, but I like the fact that you’re thinking along those lines already!) and we know that the aim is to remove the washer, and return it – we know this because Wil told us – not because I made up the aim like I did for the Jugo Flower (and we all know how wrong that went!). The head of the bolt seems to have a thick spring wire ring almost all the way around it. 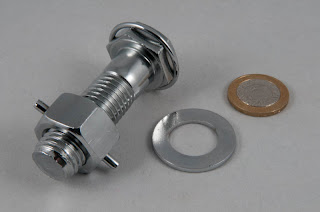 … so spend a little time examining it and trying the obvious things – turns out that brute force doesn’t work after all! Spend some time examining one of the features a bit more closely and discover (lovely little A-HA! Moment) a neatly hidden little tool that’ll probably give you a big hint of what to try next – and now you’ll either get lucky and solve it, or, like I did, wonder why things don’t work the way you’re expecting them to work, retreat, scratch your head for a while – and then realise that there’s a better way, which does indeed work the way you expect it to – et voila!
Word-to-the-wise: be careful or you’ll lose a couple of the littler bits that make up the guts of the thing – that will make you sad.
It’s a lovely little puzzle with an elegant mechanism – simple and extremely effective. Unfortunately for Wil, having acquired a Bolt #3 has just made me want to pester him to re-make more of the others even more now … anyone care to join the chorus?
Posted by allard at 17:49