My journey to getting one of Eric Fuller’s Triple Locked Boxes is a little unusual – at least for me. I’d seen the puzzle listed in the gallery over at Cubic Dissection while I was randomly surfing around looking at pictures of nice puzzles (and there are some very nice puzzles in that gallery!). In spite of Eric’s description (his opening line is: “Although it looks relatively modest on the outside, this is a phenomenally difficult puzzle box to open.”) I hadn’t really paid a huge amount of attention to it. I’d seen one or two of them on the usual auctions and hadn’t really lusted after it much. 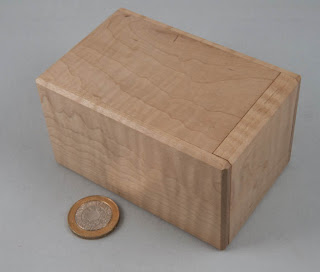 Earlier this year there was a short conversation on the Renegades Forum where someone was asking about a video that Eric had produced demonstrating the mechanism – and a link to the video was duly produced. Being the inquisitive sort, I had a look at the video – it’s fair to say that it blew my little mind, rather comprehen- sively. Any video of a puzzle solution that starts halfway through the solution with the opening remark that “I’ll start from this position because most people have been able to get this far” deserves attention! I love the unspoken implication in there that most people haven’t been able to get past this point – and then seeing Eric demonstrating what comes next makes it pretty clear why not many people had made it past that point – it also made me want to add one of them to my little collection, rather seriously!
One came up on the latest round of Cubic Dissection auctions and I managed to acquire it … as a puzzle box it is fairly modest-looking, possibly even nondescript, if that’s a fair description of a beautifully finished albeit reasonably featureless box. Eric made “approx 34” (which struck me as an interestingly specific generalisation) in a variety of different woods – some of them had different woods on the outside, this one was finished entirely in quilted maple – a lovely, interesting-looking wood and the innards are made from padauk. 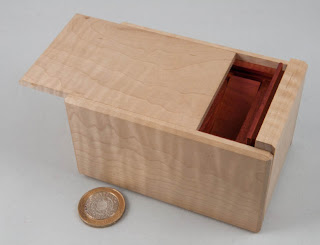 Being four and a half years old now, the first move pretty much does itself – in the process establishing it’s credentials as a Japanese-style sliding panel box, and indeed the next five or six moves reinforce that assumption perfectly and result in the top of the box being partially open … and this is the state where Eric’s video starts …
At this point there’s a compartment inside the box available to you that has a revolving false floor that appears to be hiding a little aluminium and steel tool. The false floor is clearly revolving on a pair of pins and seems to serve purely to hide (albeit not that successfully!) this little aluminium tool. The false floor is pretty obvious since it’s at half depth in the box, but doesn’t give you much of a suggestion on how to progress…


There isn’t anything obvious worth trying with the tool you’ve discovered and you might even be tempted into thinking that you’ve finished (because you can’t find anything else to do – perhaps the tool was what you were really after) although there’s clearly still a lot of box you haven’t got into yet … and if I’m honest, if I hadn’t seen Eric’s clip of what comes next, I’d have spent a long time staring at this state. 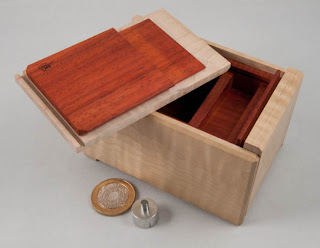 At this point the only way to work toward the solution would be to start exploring out-the-box suggestions.  Eric’s description includes the line: “this box would not have been possible without my recent metalwork experience” and up to now, none of the mechanics have really relied on much metalwork, and indeed waving a compass around the box confirms that somethings trying to realign the Earth’s magnetic fields – yet finding an accessible magnet is quite a mission – there is one, but it’s so beautifully hidden that I wouldn’t be surprised if most folks never find it without a bit of a nudge – Eric deserves a medal for that aspect alone, IMHO.
Having freed that tool, you still have three things to do, in order, and be warned: they’re as well hidden as the last step! There’s a really satisfying feeling as you do each in order and sense the progress you’re making until the lid is finally able to slide all the way off … now you’re done!
Certainly not the most beautiful puzzle box I have – but definitely one of the toughest! I’m very chuffed to have been able to add this one to my humble collection.
Posted by allard at 21:17