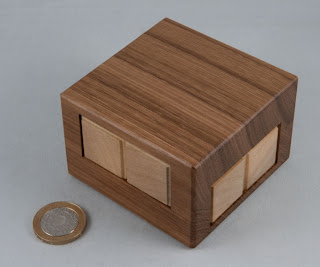 I added something a little indulgent to my last order from Mr Puzzle – I picked up a copy of a puzzle that I already had, purely because I really liked Brian’s version...

Brian’s been making wooden versions of Pandora’s Box under licence from the designer’s (Tadao Muroi) son for a little while now, and even though I have a perfectly functional copy of the Eureka version (sold as Internal Combustion) made in aluminium, I really wanted a nice wooden version as well, so I splurged a little on a lovely Blackbean and Silver Ash version from Oz. 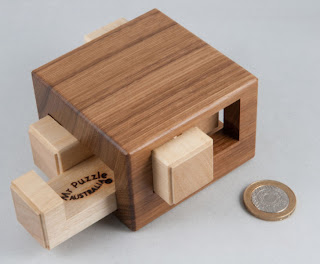 It’s an unusual puzzle that has quite a number of different assemblies, ranging from the pretty simple to the 12-move assembly that it arrives in. That assembly has a number of amusing dead ends and while you’re running through the steps to release the first piece it’s pretty easy to see where Eureka got their name for this puzzle.

With his usual attention to detail, the first piece to be released presents Brian’s trademark Mr Puzzle branding to the world on the way out – nice touch.

Beautifully made piece worthy of a place in Brian’s craftsman range.
Posted by allard at 19:10