A little while ago I received an email out of the blue from a puzzling friend I’d ‘met’ on the inter-web. I say ‘met’, because apart from the odd puzzle being sent backwards or forwards, all of our interactions have been purely digital – and I wouldn’t recognise him if I bumped into him at a Puzzle Party, and yet his email was one of the most generous emails I’ve ever received.  He’d just read my blog post about the DIY Chopstick Box and wanted to know if I might be interested in a couple of  Stickmen in need of finishing off that he happened to have lying around. He had a pair of Try-Knots and a Grandfather Clock in need of a bit of TLC and he wanted to see them going to a good home.

Given that I already had a Try-Knot, I sent a quick email to a couple of mates to check if they might be interested in a Try-Knot each and wasn’t all that surprised when they both jumped at the chance to take one, even if it involved a little bit of finishing on their part. That enabled me to reply to the kind offer and say that we’d take the lot of them and promised they’d all be going to good homes.

A short while later I had a great email from the Stick-meister himself to say he’d heard that I was going to be getting some more DIY boxes, offered some useful advice and plenty of encouragement and ended off with yet another open-ended offer of any further advice or help I might need on the project.

A short while later the rather large box arrived with a couple of Try-Knots and largely together Grandfather Clock with a bag of spare parts. That all happened just before MPP4 so Chris and Ali were able to pick up their Try-Knots at MPP4 ... since then Chris has brought his around and he’s done a great job on tidying up the frame and loosening up the travel – to the extent that it’s as good as my own Try-Knot, if not a little smoother on some bits – good job that man!

The Grandfather Clock was more or less fully assembled when it arrived although the front wasn’t glued in place, allowing me to get into the mechanism and fiddle around a bit – and there was a corner bit on one side that needed replacing. Everything else looked like it was in its place and the mechanism all seemed to work properly – albeit a bit a prone to jamming up a bit from time to time. 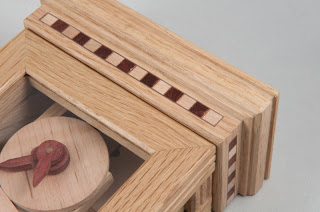 First order of business was to have a good root around through the mechanism to make sure that everything was in place, well secured (well, the bits that should be anyway!) and that there weren’t any extraneous bits gumming up the works. Most of the mechanism was more or less accessible – although getting to all of the gears took a bit of fishing around and reminded me of some of the more fiddly aspects of building model aircraft.

I’d left the mechanism out to acclimatise to the English summer weather (wet and dim!) and settle a bit before I attempted any sort of adjustments (no sense fixing something that nature will take care of for you in her own good time!). A little while later I began what became a bit of a nightly ritual for a while of waxing the gears / mechanism with some ear buds and then exercising the gubbins backwards and forwards for a while – and then using some fine sandpaper wrapped around an old stylus to smooth off the areas that looked particularly shiny – a Top Tip from the Stick-meister for identifying which bits of a mechanism are experiencing the most pressure – and might therefore need adjusting ... it’s almost like he’s done this before... ;-) 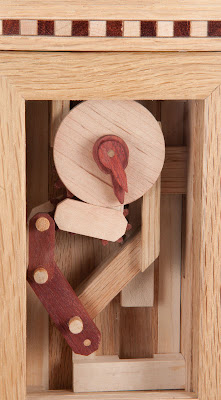 Over the next week or so things started to jam up less and less and I’d also sanded down the glue on that corner bit, roughed up the insides and then glued it in place. With the mechanism now working fairly smoothly pretty much most of the time [Rob had mentioned that they all tended to bind once in a while and that was fairly normal] I turned my attention to finish-sanding the outsides of the box and giving it a bit of a tidy up (in fairness, it didn’t need very much at all!).

Proceedings then moved out to the garage for a quick application of the thinnest coat of thinned satin lacquer possible, followed by wiping off any remaining traces about 10 minutes later. The next morning it was looking pretty good, and a bit of Renaissance Wax added quite a bit to the depth of the colours and brought out a bit more of the wood’s features. A bit more polishing and waxing over the next few evenings – especially around the bits-that-move left it all not only looking rather nice, but functioning quite well too.

The final job was gluing on the front cover with the window and this turned out to be a bit tricky – so in the end I used some double-sided sticky pads to hold it in place so that if I ever need to get to the insides again, I’ll be able to encourage it open gently.

Which brings us to this past weekend: I can now add a Stickman Grandfather Clock to my little collection of Stickmen. While I didn’t get to enjoy working out how to solve the puzzle myself, I did get a huge sense of satisfaction from getting it all to work a bit more smoothly before reassembling the final few bits – and it looks absolutely smashing! Rob’s attention to detail on this piece is staggering – the detailed inlay work around the crown is gorgeous and the way he’s created the illusion of a pair of doors down the bottom, complete with handles (just because he could) is phenomenal. 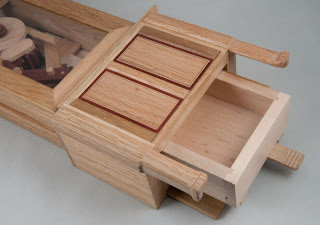 This was also my first taste of Rob’s legendary wooden gears – the mechanism inside the clock is entirely wooden – there are levers and gears and cams all working together to drive either one of the hands, or both of them in opposite directions – the design is both elegant and clever, and he’s left most of it out in full view for your entertainment ... of course finding the means of driving all of that is quite a challenge as he’s hidden them around the box very neatly – when it’s all closed up, there is virtually no clue as to what might drive all the innards, let alone how you might actually control any of it. Helpfully you are told to set the time to midnight in order to unlock the puzzle, however once you've done that there are still a couple of rather well disguised steps to get through before you can finally open the drawer.

Stickman Puzzlebox #6 was originally sold in February 2005. A total of 28 copies were made and they don’t seem to pop up on the auction sites very often – which makes me think that the folks who have them really like them – and I can see why that might be the case!