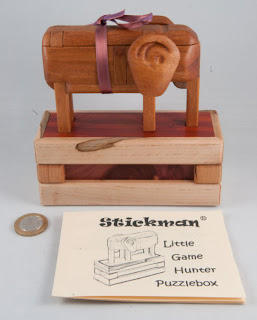 A few weeks ago I’d been trading a couple of emails with Robert Yarger about my next Stickman fixer-upper project [you’ll see it when it’s finished – not until then!] and at the end of the email he added “The elephants are coming.  I will holler when they are done.  Sneak pic attached.” And indeed there were a couple of pics of the next incarnation of Stickman goodness. At the time I thought this was Robert’s way of letting me know that he was about to let loose the next Stickman in the series and it might be a good idea to keep an eye out on the usual auction sites. Earlier in the year he’d mentioned that he was planning on reducing his run sizes, so I considered myself forewarned and kept my beady eyes open...

However, before I spotted anything on the auction sites, I was absolutely bowled over a couple of weeks ago when I received an email from Robert saying that he’d reserved a copy of the Little Game Hunter, aka Stickman #24 for me, if I’d like it. Like it? Heck yeah! The reply went back apologising for the fact that it had taken me nearly an hour to reply to the invitation, but in my defence, we’d been out for the afternoon.

Hattie the Hephalump (I’ll explain!) was duly dispatched in days and tracked across the Atlantic courtesy of USPS Tracking – noting that she spent as long waiting to be processed for customs and tax charges on this side of the pond as she did making the entire rest of her journey! Once the ransom had duly been paid to HMRC, she was released safely to her new home in Barnt Green. 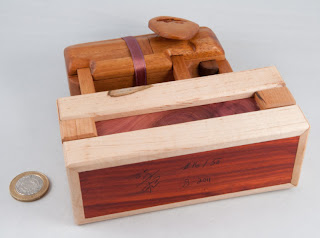 Now everyone who’s ever had the privilege of owning a Stickman Puzzlebox knows they come with a neat little booklet that contains the owner’s certificate and series number as well as the solution to the puzzle. The Little Game Hunter booklets are a little different and they not only include the series number, but also the name that Robert has given each of his elephants – mine was christened Hattie, so she will be Hattie the Hephalump, from now on.

This particular design goes back a little way and explains an unusual item in Jim Strayer’s Stickman Collection. Jim has a complete collection of Stickman puzzle boxes (I tend to use his web site as my Stickman reference) and one of the items in there is unusual, in that it isn’t really a box – it’s a Kumiki elephant made by Robert. Jim’s description just notes that it’s a Kumiki elephant that comes apart into 19 pieces, but Robert’s email for the launch of the Little Game Hunter explains that this project was planned some time ago but had to be curtailed for reasons beyond his control that saw the elephants being cut off at the feet and being separated from their mounts and being sold off just as Kumiki puzzles. Little Game Hunter goes back to that design and completes it, mounting the elephant on top of a box (the missing elephment).

Hattie arrived carefully packaged with her rather large ears neatly wrapped up between her legs – which is unusual because normally one would pack one’s trunk when travelling, not one’s ears, but there we are. She also had a neat little ribbon tied around her waist to stop the box’s second move from doing itself in the absence of the restraining piece, currently wrapped between her legs. 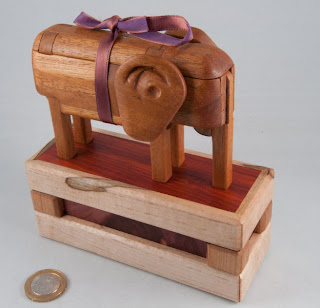 First order of business is unwrap the ears and put them in place and then undo the ribbon – admire the puzzle for a while and then read the first page of the manual to get the background about the puzzle and Robert’s helpful warning not to feed her after midnight (shades of Gremlins?) – he also suggested that she is allergic to peanut butter (who’d have known?) and gets sunburnt really easily in a subsequent email – and there’s been a thread on Renegades that has rapidly deteriorated into a catalogue of all of my childhood elephant jokes in one place (although, in fairness, Robert’s not the only one to blame for that!) – he’s full of ‘em and you get the idea he’s been saving them up for a special occasion!

Right – back to the puzzle then. First impressions: it’s tremendous! The Kumiki elephant and the box it stands on are entirely integrated – you need to solve them together to first take apart the elephant and then take the box apart – and when I say take them apart, I really mean that – when you’re done you literally end up with a pile of parts – quite an imposing sight if you’re having to reassemble your Hephalump!

The first couple of moves are fairly straight forward with very little by way of options of what to do – but then at some point the box comes into it and things can get a little strange – especially when the interaction between the box and the Hephalump becomes central and there often appears to be more than one way to take things. After a while the Hephalump starts coming apart seriously and then it pretty much sheds all its bits leaving a (closed) box with a few things sticking out of it(!). Puzzlingly, those bits appear to be getting in the way of opening the box – round two!

[Don’t you love puzzles that come at you in stages?!]

From there it’s a fairly short process to get rid of the bits and collapse the base into a pile of pieces – leaving you with a total of 26 separate bits of wood – some vaguely recognisable as Hephalump bits.

At this point it’s worth having a closer look at the wood that Robert’s chosen to use on this puzzle – because it reminds me of the reasons why I love wooden puzzles – the knots and features in the grain make it look absolutely unique and alive – your eye tells you there should be a ridge at the knots, yet the craftsman’s taken that totally out of the equation with a perfectly smooth finish. The fit of each of the pieces is perfect, yet the wood is still allowed to show off its own character – that’s the art of a true craftsman in my book – to get it to do exactly what you want it to do without sacrificing any of the original features that have been grown into that wood – and Rob does that beautifully.

Since I managed to acquire mine, Rob’s sold another 6 on a Buy Out auction on Paradise ... if you do find one for sale, take it, you’ll like it, but please keep your Hephalump away from the peanut butter jar, especially after midnight!

Thanks Rob, I love it!

[You can read puzzlemeister supreme Brian Pletcher's take on the Little Game Hunter over here ... I think he likes it too... ;-)]