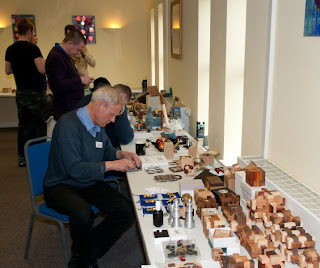 My latest MPP weekend started in the traditional manner with me at the airport on Friday night to collect the Flying Dutchman, followed by a couple of hours of gentle puzzling and banter at my place before I give up and crash for the night, leaving Louis puzzling furiously in my study.
Things the next morning weren’t quite as traditional since this was the first time that our gathering wasn’t happening at my house, so I actually needed to select some puzzles to take along and pack them in a crate, along with some home-baking, before setting out with Louis in tow for the half-hour drive down the motorway (I really can’t complain – several folks spent four or five times that getting there!) to Warwick.
Nigel had arranged the hire of a large room in his local community centre for the day and by the time Louis and I got there most of the tables had already been hauled out of storage and set up around the perimeter of the room and there were piles of chairs littered around. Louis and I mucked in and helped out with the last couple of tables and set about scattering the chairs about a bit before setting up our offerings for the day’s puzzlement on a bit of table.
Nigel had laid on drinks and snacks galore, bought a kettle for the room and laid out tea and coffee for everyone (including decaf for Ali!) – I added some shortbread and chocolate things that Gill had baked the night before … and right on cue the puzzlers began assembling. Nigel had thoughtfully put up some small posters pointing the way to the room and made up name tags for everyone so we could put names to the new faces and in turn help them to get to know us.
Apart from the usual gang who’ve been to virtually every single gathering we’ve ever had, we had a bunch of new faces, including a few seriously notable puzzle designers! It was great to have Peter Hajek joins us after I’d been along to his fabulous end of year puzzle party last year – in spite of the train company’s multiple attempts to foil his travel plans to Warwick on the morning. Veteran puzzle designer Sam Cornwell (who I’d met at Peter’s Puzzle Party) came along with his mate Mike Hawthorne, and Lawrence (who’s surname I didn’t catch to my great shame) who’d spotted a reference to the gathering on Oli’s blog, came along on the off-chance that it might be fun. Joe, one of the regulars on the Revomaze forum came along for his first MPP as well – and the rest of the motley crew can probably all consider themselves regulars, more or less. 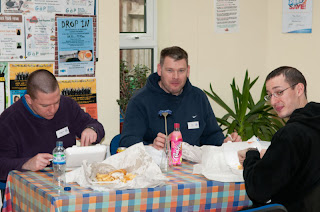 Everyone spread out about half a table’s-worth of puzzles they’d brought along for others to have a bash at and we had a prominent table next to the door with our traditional Box o’ Bounty – making sure that everyone knew they could help themselves to anything on the table that they fancied – and given strong hints that I didn’t want to be taking home more than I’d brought … like the last few times where donations significantly exceeded withdrawals! Sam and Mike rather liked the idea and ended up putting a pile of puzzles on the table (including some rather nice Triple Trouble cubes) that all managed to find homes by the afternoon. (Cheers Mike!)
Most folks tended to grab a cup of tea or coffee on the way in, unpack their  treasure and then launch into a relaxed ritual of wandering around, chatting to folk while picking up an unknown puzzle, absent-mindedly fiddling with it under the pretence of solving it, putting it down again and then repeating the entire process.
Sometime around lunchtime knots of people wandered across the road to the local chippy and returned with various combinations of fish, chicken and chips – and judging by the comments, it seemed to go down quite well. 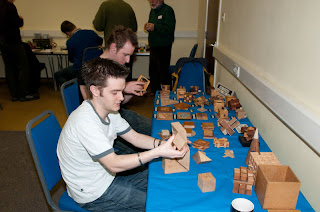 Back in the room, Peter had hauled out a couple of sets of his latest IPP Exchange Puzzle called Z-Shift and set up a couple of chairs either side of his and was animatedly talking folks through the various challenges set by the puzzle. When Peter initially took the puzzle out, I’m ashamed to say that I didn’t think it was really going to be my cup of tea – in my defence: this was right after I’d seen a copy of his latest puzzle box design, established it was for sale and pushed myself to the front of that particular queue.
Z-Shift consists of four identical double-sided Perspex pieces (red on one side and blue on the other) that look like rectangles with a bite taken out of each side at an odd angle, and the way the two colours are joined means they partially overlap at the bites … and there are three little red (or blue) pieces that look like odd-shaped off-cuts. The pieces come with a challenge card that has you building a series of hearts and triangles with different combinations of those pieces … and while I wasn’t particularly enthusiastic to start – once I’d seen how the first set of shapes magically appeared when you laid the pieces down in the right way, I was instantly hooked.
The target shapes are really unexpected given the shapes in the pieces, some of the time you’re building the outline of a shape, sometimes you’re building the coloured-in shape itself – each of the challenges is totally different and almost all of them are unexpected little surprises … I really enjoyed this puzzle and I was rather glad that Peter had taken the trouble to talk me into / through it! (I’m hoping to pick up a copy from him at some point in the future…)
During the course of the day everyone filled in a copy of Nigel’s icebreaker sheet which he claimed to have nicked from the Rochester Puzzle Picnic guys, but we all reckoned he’d shaped it to favour his collection – seriously, "Most moves on a puzzle box in your collection" and "Most pieces in a puzzle" didn’t come from the guy with the Super-Cubi and a King-Cubi on the way and a Ravensburger monster on the go? – Yeah, sure, pull the other one Nigel! :-)
As it turned out, everyone mixed perfectly well on their own without the need for an icebreaker anyway, so we didn’t end up doing much with the completed forms – but it might be interesting to pull the answers together at some point… 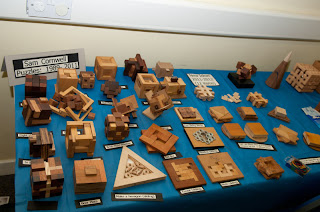 Sam Cornwell had brought a bunch of his own designs along in prototype form, complete with professional-looking name tags. I’d only come across Sam’s designs once before when I managed to find a copy of his Rescube made by Eric Fuller. A bit more research had uncovered another, In Brackets, which Eric had also made, but the others were all totally new to me – and the breadth of the designs was pretty staggering – from a series of two pin mazes, to burrs, sliding puzzles (including his last IPP Design Competition entry, Tick Box) and even a bunch of designs in development … it was great to be able to play around with some of the designs I hadn’t seen before – there really is a treasure-trove of designs in that collection just waiting for a craftsman to come along and make a few runs.
Mike had a few puzzles set up next door to Sam, including one rather large cube assembly puzzle where a number of the cuts are made across diagonals – I saw many people have a bash at it over the course of the day but only saw it properly assembled once or twice – I for one found the diagonals very disorientating. 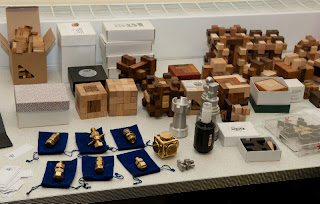 I spent quite a while parked in front of Ali’s haul happily playing with the set of Rocky Chiaro bolts he’d brought along … I’ve been thinking of getting some of these for a little while now and I suspect that having the opportunity to actually play with them will have tipped me over the edge and into buy-mode. I managed to solve five out of the six and Ali graciously said that the last one was the one he found hardest. The work on them is really terrific – Rocky clearly knows his way around a machine shop and produces beautiful little puzzles.
I also managed to take a crack at Ali's first puzzle box design after I missed out on playing with it at our Puzzle Museum visit last year. It is a truly fiendish design - elegant in its simplicity, but so well made that it gives absolutely nothing away - in fact for quite some time I was convinced it was a solid piece of wood or that the supposed lid wasn't. For effectively a three-step puzzle box it is an absolute cracker!
Louis had brought his second puzzle box design along for folks to have a bash at as well - and it surprised quite a few people with it's unusual mechanism ... if he does end up buying the tools he's threatening to, there's a pretty good risk he's going to be producing some pretty confounding devices in the near future.
It was good to see quite a few folks playing on the various Rogers I had on my table, but I suspect that nobody actually managed to solve one on the day that they hadn’t already solved – no doubt someone will chime in if I’m wrong.
When we were packing up at the end of the day there were still piles of biscuits and cans of cold drinks left, we’d hardly put a dent in the tea and coffee supply, yet I for one, felt like I was snacking and drinking coffee or something cold pretty much all day long! Note to Catering: Well done!!
By the time the centre staff came around to lock up after 6pm we’d had a thoroughly good day’s puzzling.
Thanks to everyone who came along and made it a great day – and especially to Nigel for all his work to get everything organised, set up, catered and running smoothly on the day – fantastic job, mate! Thanks! 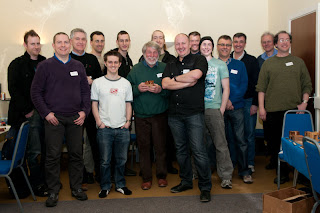