Tornado was one of the Top Ten vote-getters at last year’s Nob Yoshigahara Puzzle Design Competition at IPP31 in Berlin. Designed by the formidable team of messrs Houlis, Dyskin, Kanel-Belov, Pasternak and Estrin, it consists of a square wooden frame and four tetrahedrons in a variety of hard woods. The objective is to place the four blocks inside the frame such that they are in a stable “anti-slide” position, i.e. you can pick up the whole lot only by holding the frame and tilting or tipping up the frame doesn’t dislodge the blocks... 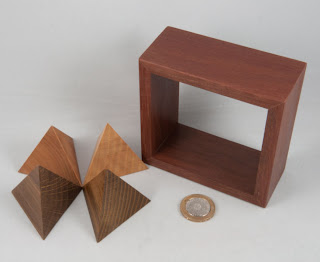 The puzzle was made in two sizes – mercifully a larger one was used for the actual competition itself and I think a smaller version was used as an exchange puzzle by a certain notable blogger (and I’m kinda hoping she’ll chip in here and confirm that because I can’t remember where I read that!). When I was over in Eindhoven for the Dutch Cube Day last year, Bernhard Schweitzer happened to haul out a large copy of Tornado as he was setting up on the Saturday afternoon, and it didn’t take very long for a discreet enquiry to be followed by a quick transaction and I added it to the ever growing pile of goodies I took from Bernhard on that trip.

I’d previously had a bit of a run-in with All For One designed by (just) Houlis & Dyskin which has an offset frame and 4 cubes to capture in the frame – failing miserably to work out how to achieve the necessary stable position – and then spending an hour or two with Louis trying to find a way to achieve the necessary assembly – but struggling, even with an extra pair of hands ... and for the record, Louis was more successful than I was! [In my defence, I did subsequently work out an easier way to assemble things that only required two hands!]

Given my experience on All For One, I was expecting a bit of a dexterity challenge – and I suspect that if I hadn’t found a copy of the larger version, I might still be fiddling furiously trying to find a solution – in the end though, with a bit of thought to where that name might have come from, I came up with a mental picture of how it might just work and then found a relatively simple way of assembling it (using only two hands!) – once the four blocks are ‘locked’ in place, the resulting assembly really is pretty stable and you can handle it by the frame quite comfortably ... of course if you touch a block the whole thing comes flying apart – but it’s a neat solution that fits the name ... so I was happy. 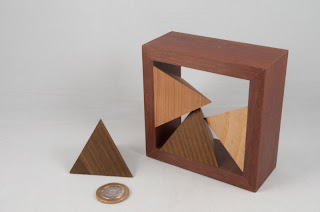 What made me even more chuffed was looking up the solutions (two are given in the competition literature) and realising that my solution wasn’t one of the ones listed ... so now I know there are at least three solutions to the Tornado – all of them achievable without the aid of another pair of hands!

I wasn’t sure I was really going to enjoy this puzzle, but in the end I actually got quite a decent sense of achievement from finding a ‘new’ solution that’s even simpler than the others in terms of its assembly – at least I think it is...
Thanks Bernhard.

Addendum - Comparison shot of the two different sizes for those who asked - never let it be said we don't aim to please! :-)