Way back in the dim and distant mists of time, with the help of Matt D my Makishi connection, I organised for a bunch of local puzzlers to get their hands on some Makishi puzzle boxes … and took the opportunity to get three of them for myself.
Mr Makishi makes a range of puzzle boxes from the 8-move box aimed at beginners up to the 50-move boxes aimed at advanced puzzlers. I opted to get a spread of boxes covering 8, 18 and 50 moves.
The simplest boxes only have moving panels– next up they introduce sliders as well as moving panels and the harder boxes incorporate interaction / interference between panels as well as dead ends and partial moves…the boxes are incredibly reasonably priced and while they may not win many beauty prizes, they are neatly finished and cracking puzzles.
Several puzzlers have already written about their experiences and you can find Brian’s thoughts here, Oli’s over here and Jeff’s over here. 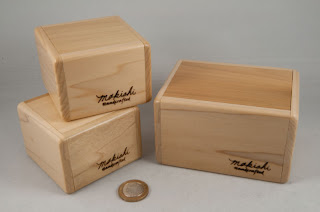 I managed to dispatch with the two simpler boxes in no time at all, in spite of the sides on the 8-move box being rather tight. The 18-move box has a pair of sliders and behaves like a good-mannered Japanese-style puzzle box should. Having completed those quite quickly, I put the 50-move box to one side for a bit in order to spread out the puzzling pleasure… little did I know how futile that little gesture was!
So I came back to it a little while later and laid into it – sides, sliders all moving like poetry in motion, exactly as I wanted them to move, until about twenty moves in when I hit an absolute brick wall! There is literally nowhere to go … so I explore a little – maybe something’s a bit stiff somewhere, try a little finessing – nothing.
OK, I get it – there’s dead end in there. Let’s go back a few moves. Nope.
Maybe I dreamt it? Blast through again and come up against the same immovable object.
Bugger!
Soon enough my attention switches to another toy / puzzle / gizmo, and I leave the 50-move on the “Current work” shelf of the desk – where it stares at me on and off for the next few months. Sure, I occasionally take it down, forget everything I’ve ever tried before and try it afresh – only to find that brick wall every time.
Back in December on Louis’ last visit he even offers to check it out for me – you know, in case there’s actually something wrong with it that renders it locked – so he fiddles around with it and confirms that it all works properly – in fact it’s a really nice and smooth example!
Excellent news – it’s just the puzzler then that’s incompetent!
For the next couple of months I repeat the exercise I’ve tried in the previous few months – sadly with the same result… truly humbled by a simple-looking puzzle box. 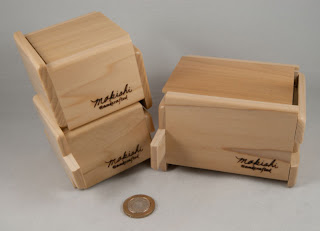 When Louis came to stay a couple of weeks ago, I gave in and asked for a hint – at which point the wise man from the east stared into the distance a little and said “Move n” (OK, he put a number in there, not a letter, but I’m not going to make it easy for you!) – which confused me because I was way past that move – “Move n” he repeated, “that’s where you went wrong.” So I went back and I looked, and he was right – I’d wandered into a dead end that had trapped me for many, many months… fantastic!
From there on the box settled into a predictable rhythm that a box with that many moves almost has to have and a little while later it was opening for the first time ever in my hands…
Mr Makishi’s boxes all have a magical screw on the bottom panel that keeps the whole box together and Matt had passed on a warning that the screws shouldn’t be removed (!) … however, with a little encouragement from my Dutch friend, I’d whipped out the screw and removed the panels, baring the little mazes on the sides and they made very interesting viewing – it really gives you a great insight into not only how the boxes themselves are constructed, but also into how the complexity of the movements required is determined by a pair of innocuous little mazes inside the side panels. If you are foolish enough to remove the magical screw, then please take care to replace all the panels in the right place and facing the right way or you will end up with a useless pile of planks!
Posted by allard at 21:50