Tom Jolly’s Square Dance is an intriguing little puzzle that sort of looks like a little 3*3 sliding tile puzzle – at least inasmuch as there appear to be 9 square tiles in a frame and one of them can be popped out to enable you to move the remaining tiles around, a bit, except there are no markings or pictures on the pieces. Now I’m not sure if that should make it a really easy puzzle (after all, any assembly must be right!) or a really difficult one (what if there are other complications?).
Popping out the first corner square (it’s kept neatly in place with a pair of magnets) gives you your first hint at what lies ahead – there is a track around the inside of the frame, and on some of the pieces, and each piece has a series of tabs sticking out to engage the other pieces and the frame … which is fine, except that the Padauk frame then has a series of strategically placed blocks stopping you from moving some of the bits where you want to, and a little experimenting soon shows you just how unexpected some of those tabs really are. 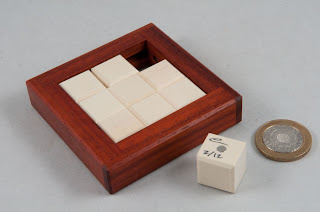 At first there’s only really one path to be followed – moving the piece that can move releases the next one and so forth – until there’s a fork in the road and then things start getting interesting – and indeed I was quite surprised after quite a bit of fiddling around when the first piece was ready to pop out – because it came out in a rather odd way – and you have to admire the design that achieves that…
The next piece was not much easier in spite of all that extra space created by getting the second piece out of the way. Indeed the extra space means more opportunity for even more forks in the road as it were …working reasonably deliberately you can try and release pieces in turn until you find the right one, in the right spot … until there’s enough space that only a numpty wouldn’t be able to extract the last few pieces…
The tiles themselves have been mostly milled from a single piece of Holly each – the resulting fit between the pieces is terrific, with little or no play between them and no bowing at the centre of the grid at all when the pieces are in the frame. The result is a pleasingly positive feel where the pieces move smoothly when they’re properly aligned and don’t move when they aren’t. 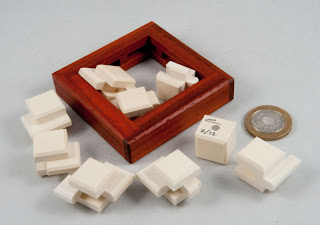 I did spend a while trying to construct a solution outside of the frame that allows for the obstructions inside the frame itself – and while that may be feasible, transferring that into the frame without losing my mind turned out to be somewhat harder … although in my defence, Burr Tools reckons there are a total of 2166 assemblies, of which only 4(!) are actually achievable inside the constraints of the frame - which somehow makes me feel slightly less of a failure as a puzzler!

[UPDATE: Neil got in touch and made me revisit my Burr Tools model to find that actually if you exclude rotations and reflections, there are only 960 possible assemblies but only two of them are achievable - however, there are two identical pieces, so those figures reduce to a unique solution(!) out of 480 possible assemblies. Thanks Neil!]
Helpfully Burr Tools demonstrates the steps required for reconstruction and I’ve relied on it each time I’ve put the puzzle back together again so far … maybe one day I’ll be struck with some sudden insight into how to ‘see’ the solutions for these sorts of puzzles – but I wouldn’t hold my breath… 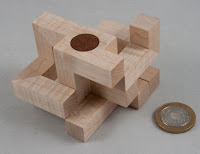 Sun, designed by Jos Bergmans, is a fiendishly simple-looking two-piece tanglement in wood (mine’s Maple) where the object is to join (tangle!) the two pieces so that the two halves of the sun (Sapele veneer on mine) are joined up. Eric (rather unsportingly!) ships this one in two bits so you have no choice but to solve it yourself!
Eric’s description of the pieces pointed out some of the finer points that non-craftsmen (like me!) might not fully appreciate – firstly the edges are all square, which is unusual for this sort of puzzle, especially ones where rotations are (!) required and secondly, he’s paid special attention to the fully mitred joints – and looking at one of the triple-mitred joints shows just how accurate they are. 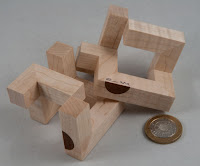 Fiddling with the pieces is quite fun and needs to be fairly precise – remember the bit about the square edges? But that means that when something should work, it does and when it shouldn’t there isn’t much ambiguity, which can sometimes happen when the pieces have a little give in them (no chance of that here) or have rounded edges (you have been paying attention, haven’t you?). There are some surprising moves and I really enjoyed the way the final solution sort of snuck up on me and all of a sudden it was right there! Even after taking it apart and putting it back together a bunch of times, I still find some of the movements interesting and unexpected – great little puzzle to fiddle with in an idle moment.

Alchemy is an Altekruse-ish puzzle designed by Brian Young, based on ideas in Stewart Coffin’s Puzzling World of Polyhedral Dissections. The book points out that variants on the Altekruse theme can be improved (read: made harder!) by adding pins and holes in them and Coffin gives some examples of them in his book … Brian Young then took that encouragement to extremes and came up with a design that uses 14 unique pieces(!). 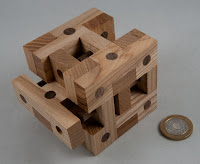 Eric’s version is made in Ash and has Walnut pins – as usual the tolerances are indecently good – things move smoothly when they should, and don’t move at all when they shouldn’t.
When I described the puzzle as Altekruse-ish – that probably wasn’t particularly accurate – the basic structure is an Altekruse assembly – but the pins and holes make the positioning of the pieces and the order of assembly somewhat more critical than on a standard Altekruse – and before you ask, it’s way too hard for me to consider assembling without Mr Roever’s computational assistance! 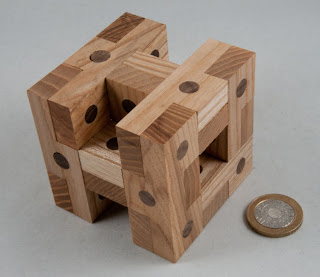