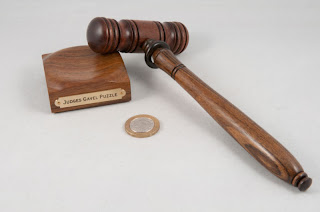 I first noticed Mike Toulouzas’ Judge’s Gavel in the entries for last year’s Nob Yoshigahara Puzzle Design Competition on John Rausch’s web site – and soon after the end of IPP31 spotted that it had been awarded a Jury First Prize Award … and then a couple of weeks later I really enjoyed reading Brian Pletcher’s descriptions of his experiences with the various competition entries – and the one thing that made me smile was his references to the loud “THWACK!” whenever anyone was working on Mike’s Gavel.
Toward the end of last year, I’d been swapping emails with Mike about another of his puzzles and I mentioned in passing that if he ever made another run of Gavels, I’d love a copy, and then promptly forgot about that for a couple of months – during which time I found myself playing with a copy at Peter Hajek’s place and thinking to myself that it really was a rather cute puzzle … so when Mike got back in touch a few months later and said he had some available if I was still interested … it didn’t take long to Pay(pal) the man and take receipt of a nicely packaged block and hammer! 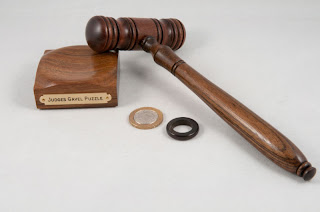 The new run is, I suspect, a little smaller than the earlier run (and I’m going on my recollection of the size of the Gavel on Peter’s bookshelf back in December – so I may well have that wrong!) and has had a neat brass plate added to the block that proclaims “Judges Gavel Puzzle”. The block is made of Lignum Vitae – that super dense wood that actually sinks in water, and the Gavel is made of a combination of Mahogany and Mexican Ebony. The shaft of the gavel has a trapped ring spinning loosely around it and your goal is to free the ring … the only strange thing you’ll notice more or less straight away is a small hole on one side of the head of the actual gavel.
You’ll probably be tempted to try unscrewing the handle from the head (yip it spins pretty freely – although sometimes it seems even freer!)  or even unscrewing parts of the head itself – and they won’t get you far. At some point your inner child will get the better of you and you’ll have a bit of a “THWACK!” and you’ll find that quite satisfying and you’ll probably have a few more goes before you get to wondering if all that thwhacking might actually even be useful – result! – A puzzle that encourages you to play like a child! 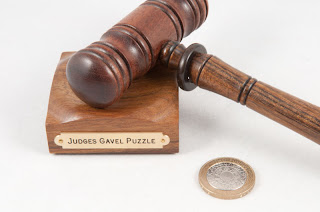 Brian’s original description got it spot on – what makes the puzzle great is that it’s very gavel-ness is central to the solution of the puzzle – and that’s very satisfying.
Mike’s lathe-work is expert. The gavel absolutely looks the part and you’ll have no qualms about giving it a decent tonk on the supplied block – if it weren’t a puzzle, it would still look great – knowing it’s an award-winning puzzle as well makes it something really special.

Neil's written about his thoughts on the Judges Gavel over here as well...