A couple of interesting finds... 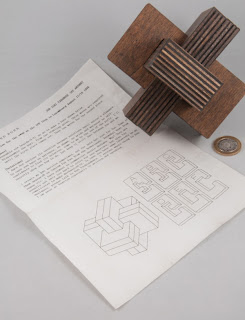 Back in December at Peter Hajek’s EPP (don’t worry, I think I’m running out of excuses for continually referring back to this one!) a couple of the guys there had brought along some spare puzzles they were interested in trading or bartering – and as I’m rather new to this whole puzzle-collecting thing, I don’t really have any puzzles I want to get rid of yet, let alone have any spares or duplicates, so when I spotted something interesting, I was forced to resort to the puzzlers' lowest common denominator: cash. 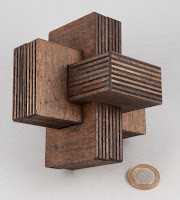 The first was a Six Board Burr that Jun-Ichi Yananose used as his exchange puzzle at IPP16 in Luxembourg. It’s a big, chunky, brute of a puzzle made in thick plywood that came in what looked like the original plastic bag from 1996 along with its information sheet. The information sheet is delightful – pointing out that the solution is not supplied, but coyly admitting that if you ask him for the solution, he’ll show you how to solve the puzzle as long as you keep the solution to yourself. [He also pokes fun at his name, pointing out it’s an anagram of “As anyone”.] 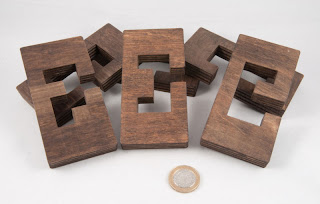 The actual puzzle itself is listed on Ishino’s site as Board Burr #2 and the design dates back to 1991. It’s a reasonably mainstream board burr with no weird little tricks or rotations thrown in (unlike BB#1 and BB#3) and while the pieces are accurately made, I wouldn’t describe them as particularly good looking – so at first glance it might look like a bit of an ugly duckling among some of the lovely hardwood pieces from the likes of Rob, Eric or Jerry – but this puzzle has history to it – this was one of Yananose’s early exchange puzzles and he’s turned into somewhat of a burr designing legend – so I like the fact that I have a copy of one of his very early burrs – one that he chose to show off his own designs...

The second item I spotted was a Nob Yoshigahara design called For your own sake made by Hikimi. I recognised the puzzle from a puzzle auction listing and thought it looked quite cute. Nob designed a set of puzzles based around the traditional wooden sake cup (masu) and used them to great effect as the basis for several packing puzzles and even a hidden maze or two. 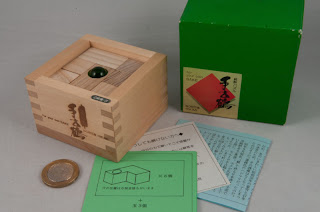 For your own sake is a packing puzzle with a bit of a twist. You have 6 L-shaped pieces to place into the masu ... along with three marbles – two yellow and one green if you’re interested. When you first open the box, the green marble is sitting proud half out of a piece in the centre of the box and the two yellow marbles are nowhere to be seen until you tip the pieces out. The L-shaped pieces have a series of half-spheres cut into them, so that if you place two of these holes next to one another, you can hide a marble in the hole ... and the object of the puzzle is to pack all the pieces in the masu such that all marbles are hidden. 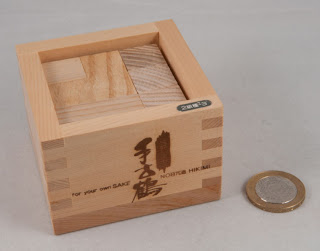 OK – so we have 6 L-shaped pieces to pack into two 3*3 layers – and we know that all of the holes need to be facing another hole (there aren’t any spare holes – that would just be mean ... evil laugh heard in puzzle design shop in the distance...) and moreover they all need to be internal – which should narrow things down quite a lot ... should be simple, except master Yoshigahara has gone and placed the holes in particular spots – probably not intentionally to make it hard to solve, that’s probably just a fortuitous unintended consequence! In fairness, it’s not horribly difficult – even I managed to find a solution without the help of my usual tool of choice – although I did use it to confirm that there are 8 solutions available.

Cute little puzzle that really stands out with the green marble perched in the centre of the box inviting you to pack it away properly.
Posted by allard at 11:56