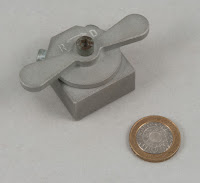 When my fellow obsessed-blogger recently decided to offload some of his slightly less-cherished puzzles, I jumped at the opportunity to relieve him of a couple of Rogers – I’ve already written about the Alles Roger over here and the other Roger I relieved him of was the Propeller puzzle.
It’s pretty obvious where it gets its name from and a quick fiddle with it confirms that the mechanism appears to be jammed with something – stopping the propeller from spinning … so it merely rocks backwards and forwards a bit … and it appears that the aim is to get the propeller to spin freely.
While I was fiddling around randomly with the puzzle I actually managed to release the mechanism once or twice, although the randomness of my fiddling left me wondering what exactly it was that I’d done to release the darned thing. 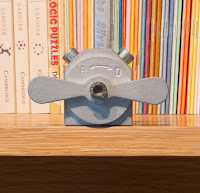 Over the course of a month or so I’d keep fiddling with it and not getting particularly far on solving it … and then on our last trip down to the Devon Puzzle Heaven there were quite a few folks having a bash at a copy of Propeller as well – with one particular expert suggesting that the solution involved flicking the puzzle in a rather specific manner and then spinning the blade – so back at home I spent a while trying various orientations of flicks and spins, in the process launching the little puzzle across the study several times, and only just avoided having to replace several glass cabinet doors and a keyboard, in my enthusiastic attempts to ‘solve’ this puzzle… 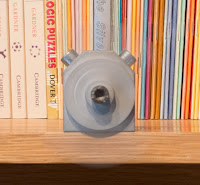 A week or two later I tried a different tack altogether – not wanting to believe that the solution relied on a combination of very specific rapid movements in quick succession while hoping for the best – and found a somewhat tidier, far more repeatable solution, that doesn’t risk destroying my puzzle cabinets in the process – now I’m happy.