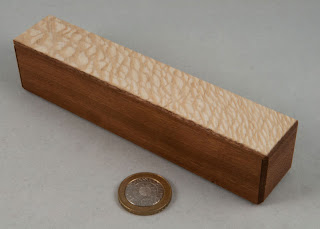 The second in Eric Fuller’s series of cigar boxes had me stumped for quite a while. There are a couple of relatively obvious things to do to it at the start, and I did them all, but then I found myself at a bit of a loss – the lid would open an inch or two, showing you that there was a cigar in there, along with a couple of matches that could be tipped out, but try as I might I couldn’t find anything else to do … so it was placed on the “To be solved, damn-it!”-shelf on the desk and every now and then I’d take it down and try something slightly different in the hope of stumbling onto something useful (OK, quite often I actually tried exactly the same things hoping for a different outcome … and I know that some clever bloke had some opinions about the wisdom of that approach!) .
OK, the box is made of Sapele and is named after the “one of the friendly part-timers behind the bar” according to Eric’s description – mine has a bleached Lacewood veneer on the top and bottom. It’s supposed to be a step up from Chris and I can certainly vouch for that!
I’d read Brian’s blog about the box and took his warnings about not shaking and bashing the box for fear of finding an ‘alternative’ method of opening it …although I did try doing exactly that, just a little, anyway – and had no success at all. 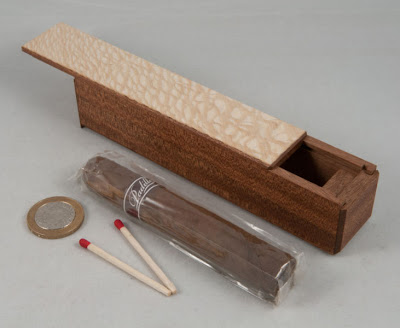 I kept getting to exactly the same place every time – 3 moves in and hit a dead end! I’d tried shoving the matches into the various grooves on the box (surely it couldn’t be coincidence that they just happened to fit in those grooves perfectly?!) – I tried poking around inside the lid of the box with a match – I even thought there might be magnets hidden inside the matches to release a catch somewhere (hey, I was getting desperate!) – I had noticed that the ends of the matches had been ever so slightly rounded … so I was sure they were key to the solution, but I couldn’t find anything useful to do with them…
So I did the obvious thing, and left it out for Louis on his last visit – he’d solved it by the time I got up the next morning – how’s that for service!
All was clear – and I’d been totally fooled – the mechanism is neatly hidden and had eluded me for weeks … in my defence, the first few moves send you off in entirely the wrong direction.
I like the fact that once opened, you can actually remove a few of the panels entirely, and see just how Eric has got some of them to behave the way they do – he is quite clever with those little things!
Posted by allard at 12:27