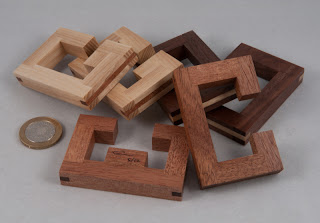 Designed by Chi-Ren Chen, this innocuous-looking board burr has a couple of interesting little twists to it.

A few months ago Eric posted some early pics of his prototypes on his Facebook page and there was a chorus of approval from the peanut gallery – while all the approval was going on he wondered aloud whether he should make the pieces with splined ends for some added strength, and a whole lot of extra good looks. Several of us piled in and encouraged him to add splines, even though they’d invariably add a little to the cost – and probably quite a bit of extra work! :-)

A couple of days later a splined version appeared and it was indeed rather a good-looking piece of work ... in the interests of science, Eric then went and slung a 45 lbs weight on the one end of it and posted a picture of this poor little innocent puzzle piece with a massive lump of iron trying to rip it apart – and the piece held its own – so the point was made, the splined version of the burr is pretty darn strong!

My copy arrived with the other recent batch from Cubic Dissection neatly disassembled in a little plastic baggy – gee thanks! The pieces are made of walnut, ash and African mahogany, with the splines each on a contrasting wood.

Eric’s description notes that it’s a level 2.14.12 burr that is “more approachable than the level may seem” – the level is rather odd really, with the assembled puzzle shedding its first pieces after a mere two moves, while the next piece takes 14 moves to release, and a further 12 are required to get the next one off before it becomes a trivial matter. 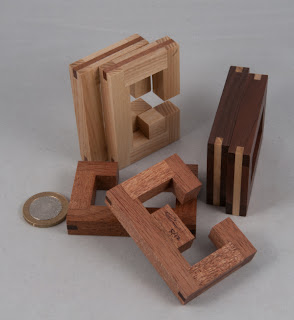 Eric’s encouragement is well-placed – if you were to bash the pieces into BurrTools and look for a solution, you might be disappointed – because, as PuzzleWillBePlayed.com notes, rotations are required... so you have no choice really!

I had a look at the pieces, decided that the colours needed to be together in pairs (huge logical leap me? – Nah, that’s what Eric’s pics show!) – Handily, there are two identical pairs of pieces which makes placement in the solution a lot simpler ... and there’s a piece that would work quite nicely at the end to give that first two-move piece-removal, while actually locking everything else together, so I’d more or less decided where the pieces needed to go with that little thought process alone – in fact, if you add one further constraint: don’t waste space as you go, you can pretty much find a unique target assembly – the tricky bit is then just to work out how to get there.

I started fiddling around fairly aimlessly and found that the tolerances between the pieces were pretty incredible – when you’re assembling board burrs you’re invariably sliding one piece over a set of other pieces – and if you don’t have all the pieces properly aligned and absolutely square, you’re not going to get anything to move ... so much for the comment on PuzzleWillBePlayed.com that if the edges are rounded, short-cuts are possible. No short-cuts are possible on Eric’s version!

I started with one pair of pieces and pretty much used those as a frame of reference all the way through – while trying to work out how to get the other three pieces into their places in order to allow the last piece to be inserted the way I’m guessing it has to ... that process took a fair amount of trial and error as well as experimentation to work out what order they needed to go in and how you could manipulate them in order to free up the space to do what you need to do next.

If you’re more used to playing with well-behaved orthogonal burrs, that process can all seem rather unstructured and chaotic, but combined with Eric’s fine tolerances, you always know when something is supposed to work (it fits, just) and when it shouldn’t... 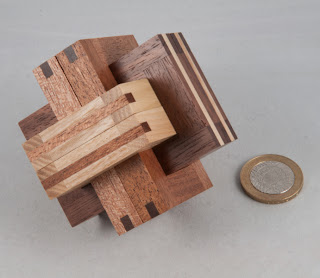 In the end, it probably took me the best part of an hour to suss out the order, orientation and then the manoeuvres required to construct it – and I was actually rather chuffed with myself for managing that given that it’s way outside of my usual comfort zone.

It’s a fun little burr that looks like it should be really simple, but it’ll definitely provide plenty of amusement for almost every puzzler.