OK – it might be a bit after the fact (Gill and I spent a week in NYC after IPP, hence the dearth of blog posts over the past few weeks, except for the ones I teed up before I left) , but here we go – the newbie’s take on IPP32: 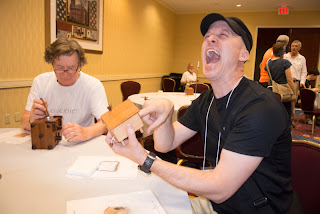 Anything else that I say about it now is not going to do it justice. Trust me.
In fact that was one of the conversations that Neil and I had toward the end of IPP: How the heck do we write about this and convey the shear awesomeness of it all? And we both concluded that you couldn’t, so best not to try...

So what you are going to get from me are some stories and descriptions of some of the events from my point of view ... as usual they’re going to be personal stories and they’ll give you a flavour of what IPP32 was like, but if you’re looking for the blow-by-blow description, sorry, I have a day-job (and a wife and two dogs who haven’t seen me for a while!).

...OK so let’s start at the top – Gill and I took a flight out of Heathrow into Dulles and it was pretty uneventful – uneventful flights are good flights! Walked off the plane into a wall of heat and humidity – realised how much we’d missed the simple things in life... sunshine! 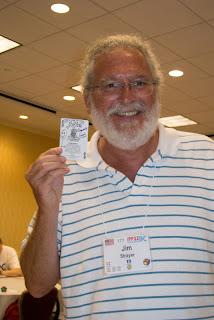 Cab to the hotel was deliciously cool and after checking in and recognising a couple of name tags on the way up to the room to unpack, we wandered down to the IPP registration desk. I walked up to the desk and said “Hi I’m Allard Walker” and I was met with a wall of smiles, introductions and hands to shake – Brett Kuehner made it his job to introduce me to everyone around at the time (most of whom seemed to be related to him – turns out he’d roped pretty much his whole family in to help out!) and sort me out with the registration pack, name tags for Gill and I, we had our photos taken, collected the IPP t-shirts I’d ordered and had a quick lesson in the badge puzzle (more later, promise!) before we wandered back up to the room to dump the shirts and the welcome pack and headed back down to the bar area (for some reason the bar / lobby always seems to be the hub at these events!).  Our badges had a green background for our delegate numbers which marked us out as first timers and that little detail proved to be a great conversation starter over the next few days...

Down at the bar I recognised a face from one of our MPP meetings (Richard Gain) and recognised a voice from a set of video reviews – caught his eye and introduced myself to Neil Hutchison – The Juggler.  Wil joined us a while later and started telling us a sob-story about being stopped by German customs who then took his Peppermint Stick puzzle apart so he asked me if I’d mind reassembling it for him – it would probably be rude to refuse, so I sat down and tried, only it wouldn’t quite go together properly, until eventually I looked up and asked Wil if this was actually a Peppermint Twist or just a matched pair of twisted wires – they didn’t seem to want to bite together ... and about the same time I noticed Wil being even more conspiratorial than usual and smelled a rat ... at which point he gave me the fifth piece of what I’d assumed was a four piece puzzle – after all my copy is! It went together pretty sweetly after that, much to everyone’s amusement! 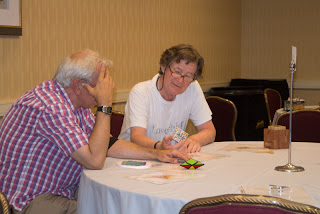 We chatted for a while and then, having established that most folks had already had dinner, we took up residence in the bar proper with a couple of puzzlers off the Renegades forum and I took out a couple of puzzles for folks to play with.

While the blokes began talking and playing with puzzles, the girls struck up a conversation and before long Jen (Neil’s partner), Lesley (Peter Wiltshire’s wife) and Gill (my far better half) had realised that they had lots more in common than being puzzle-widows – they shared a bunch of hobbies and interests (it seems that puzzlers’ wives are a pretty crafty bunch!) and a serious passion for shopping!

I’d taken my copy of Louis’ A-Maze-Ing box along for the ride, pretty sure that not many people had seen one (!) – before long Peter Wiltshire had passed the box onto Jim Strayer who proceeded to open it ... 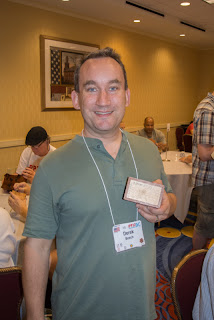 Peter rather kindly gave me a great little cube that he'd made and it kept me occupied for quite a while, with Neil peering over my shoulder and saying not-very-helpful things - all puzzlers are alike it seems!

Peter had worked his way through my copy of Wil’s Washer Cylinder with a little bit of encouragement from Neil and I in between a bunch of friendly puzzle-banter ... hard to believe I’d only just met these guys.

Mine’s Little Twister had come along as well, and although it didn’t come out quite as often as the A-Maze-Ing box, it remained undefeated during the entire IPP.

Neil had brought along a few copies of Derek Bosch’s Hex Stairs puzzle that he’d made for the puzzle party and had brought a couple down for me to choose one from the different woods he’d made them in, along with a tiny copy he’d been experimenting with. I began fiddling with the tiny one after a little encouragement from Neil, only to find that I couldn’t get it back together again – the tolerances are so fine that unless you had everything perfectly aligned, it will not go back together again – so Neil helped me out with that one. Having chosen one of the larger ones to buy, we played with that, with Jim Strayer giving us all a good laugh a few minutes later with his “Gosh, that sucker’ll come right apart on you!” while he was fiddling with a copy. 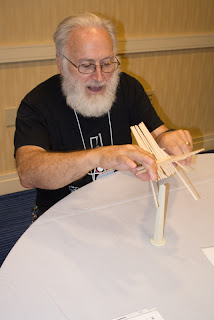 While we were sitting chatting, I recognised Rox from the photos on her blog as she wandered over to say hello, to me ... and then she spotted a pile of twisty puzzles and she was off again.

A couple of times over the course of the IPP I found myself using the same description, I felt like I’d found my tribe, my clan – they were just like me, shared my interests and didn’t think it was weird to enjoy being puzzled and collecting puzzling things.

A bit later most of the girls had wandered back up to their rooms and one of the committee came over and announced that the design competition room was opened – clearing the room of pretty much all of the puzzlers instantaneously ... except for me – I’m a bit slow ... I eventually caught up with the rest of them in a room full of new puzzles waiting to be explored ... this really is like being in puzzle heaven – the very best  new puzzles crafted by the best craftsmen out there, all neatly laid out for anyone to have a go at.

A bunch of us were spread out around the room puzzling, mostly in silence, but every now and then there would be a salvo of banter at someone’s expense and a round of laughter before the puzzling continued. I’d come across Simon Nightingale in the puzzle room and said hello and settled down to a cute little bowler hat assembly puzzle that I later discovered was from Kohfuh – and I was quite chuffed that I’d managed to solve it reasonably quickly, especially after Simon’s warnings on how hard it was likely to be – I must have got a little lucky as there was a neat little bit of misdirection in the shape of the pieces... 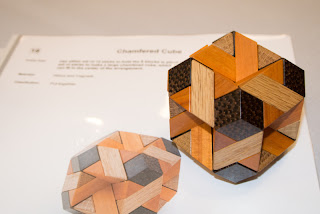 I also had a go at Jane Kostick’s  Chamfered cube – and managed to get the assembly together fairly neatly – I really enjoy playing with her puzzles, they have a nice satisfying feel when the magnets grab and they slot together neatly. She’d entered a few separate puzzles in this year’s competition and they were definitely more puzzle-y than her entry from last year.

Being a bit of a puzzle box junkie I had a brief bash at The Vault, realised that the tool was a flash-light (Hey, it was more than some folks managed – several of whom were spinning it and whacking it on the table, although nobody blew on it while I was around) but didn’t really get much further than that.

I crashed at about midnight, which given I was still on UK-time made it about 6am already ... and slept like a log until 3am...