A Pair of Iwahiro gems 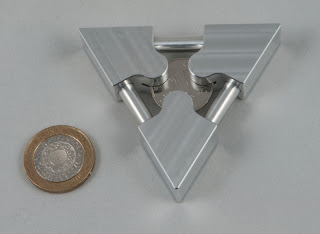 Tritalon first appeared a couple of weeks before IPP32 in one of Wil Strijbos’ regular newsletters – Wil offered it as a new take apart puzzle from Iwahiro and a bunch of us piled in as usual ... only to spot it a little while later entered into this year’s Design Competition.

Tritalon is nicely machined in aluminium with the three corner pieces each having a slot in the centre used to trap the one Yuan coin. The corner pieces are neatly finished off with a gentle chamfer to stop you from scratching anything important and they’re joined to one another by a series of rods. 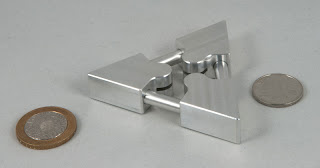 It looks pretty neat and it’s the sort of puzzle you can safely give non-puzzlers, for two reasons: firstly it’s unusual shape invites inquiring minds and secondly, it’s pretty hardy!


Looking at it you’ll probably come up with a theory on how it’s going to be opened, and chances are you’ll be right, but depending on who had it last, it might take you a while to test your theory... one of my comments about this puzzle are that I like the fact that it rewards patience – you can’t rush this puzzle, if you do, it sulks and you have to slow down... embarrassingly that little ‘feature’ confused me for a while and it was only when one of my puzzling mates inflicted my own usual advice on me (THINK!) that I realised that I was causing my own problems and had it open pretty soon after that. 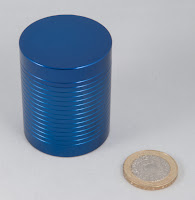 My second Iwahiro gem was one that I’d been on the lookout for for a while – Alcyl. This little blue aluminium cylinder seems to have utterly confounded quite a few folks after it was Iwahiro’s IPP29 Exchange Puzzle.

There’s something rattling inside the cylinder and even the most careful inspection of the exterior gives no clues as to how the puzzle opens... it’s not a hugely complicated mechanism, but it will trap the unwary for a while – and I really enjoyed the little twists and turns along the way – each time you think you’re home and dry, it tosses another little curveball at you.

Very glad that Iwahiro had another run of these great little puzzles made up.
Posted by allard at 18:09