Long before IPP, Wil had mentioned that he’d signed up for a trip to the National Cryptologic Museum after IPP and recommended it, so I signed up for it as well. 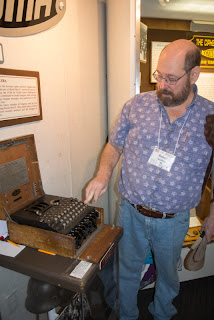 Knowing that it required a 9:00 am  start, Gill and I had a couple of bagels from Einstein’s in the lobby before I headed out toward Baltimore on a bus with a bunch of weary puzzlers ... even Chinny was relatively quiet on the bus, so it must have been either a very late night or jet lag had finally caught him as well.

When we got to the museum which is on the NSA campus outside Baltimore, we were split into two groups  for the tours, and as we found ourselves in the second tour-group, we hit the gift shop – de rigueur, n’est-ce pas? There were plenty of little gifts and gizmos to keep us amused for a while and even a small copy of Oskar’s Key Maze with the museum’s branding on it – I bought a handful to take home as gifts for my puzzling mates and between us I think we managed to wipe out their entire stock ... not sure if anyone on the first tour group actually even saw any of those by the time they finished their tour and got to the gift shop.

Our tour started with a few stories about some of the folks who’d been the main characters in the US Crypto community, related by our genial tour guide who still worked next door and got called across whenever they had too many tour groups for the usual volunteer staff to cope with on their own. He told us some lovely stories about the characters and their quirks and what they’d done for cryptanalysis over the years. 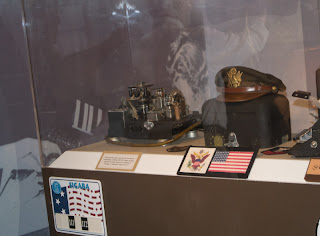 Next stop on the tour was a series of exhibits from around the Second World War and thereafter – and this was where our tour guide got really animated, telling us how incredible the machinery was for its time and all the secrecy around their manufacture and use at the time. He took us on a whistle-stop tour through some of the encryption devices and had some interesting stories about each one – he stopped himself at one point and explained that the technology and machinery was what got him most enthusiastic, and it really showed. (One of the guys spotted a car in the parking lot with a number plate that read SIGABA – one of the machines he’d been telling us about, and sure enough, while we were having lunch later on, he hopped in and drove off in that car.)

We moved around to an exhibit of the German crypto devices, including a pair of Enigma machines out for anyone to play with ... so we did - how many times are you going to come across an opportunity to play around with a real piece of working WWII cryptographic history.

After that we touched on the code-breaking side of things, including a brief mention of Alan Turing and the English effort on breaking the Enigma codes and then the breaking of the Japanese codes. All too soon the hour was up and we hadn’t touched several parts of the museum at all – a great trip for anyone in the neighbourhood – fascinating stories and interesting exhibits.

The museum itself didn’t have any catering, so the organisers had lined up some drinks and snacks for us to enjoy in the parking lot ... most folks sought the comfort of the aircon, but Rik and I ended up sitting on a rock at the side of the parking lot soaking up some sun ... while Rob Hegge found himself caught between the sun and the aircon, sitting in the shade in the luggage space of the bus. I had a great chat with Rik about the history of IPP (he’s been there for a lot of it!) and about the difficulties of collecting puzzles pre-internet – which still blows my mind a bit!

After we got back from the tour, Gill and I wandered across to the mall to buy a couple of things (like a new pair of trainers – having realised my current pair were about 8 years old – although in fairness, they don’t do a lot of mileage!)
When we got back we bumped into Jen and Neil and made some rough plans to meet up for dinner before heading up to the room to start packing up all the puzzles.  Somehow Gill managed to pack everything, including the boxes I needed to take to NYC for Jane – 15 years working for an airline taught her some terrifically useful skills.

Dinner turned into quite an event! We’d met up with Jen and Neil and found a few others hanging around at the same time so we just kept inviting everyone along and in the end we had quite a team for dinner at King Street Blues. The four of us were joined by Rox & Kat, Dor, James & Lindsey, Rob Hegge and Scott Elliott. We had a pretty good dinner and then Wil joined us for a drink and some puzzling.  He had a bunch of matchstick puzzle challenges for us, except he didn’t have any matches, so he’d liberated some hotel pens in lieu of matches...needless to say the puzzles ended up taking up most of the table space since pens are a little longer than matches! Wil had a great time setting challenges and then telling us that our unusual approaches weren’t allowed or that there was a better...

When we eventually left the restaurant and wandered back to the hotel we must have looked a bit odd because I heard Nick explaining to someone “Oh, they’re the Renegades” as we wandered past – and I kind of liked the idea of being associated with them...

Next morning we left on the fast train to New York, with just a bit of puzzling on the train (Lonpos Cosmic Creatures)... before a puzzling dinner brought the puzzle-side of our trip to an end.