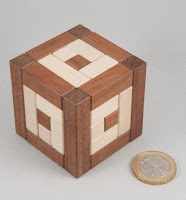 Next up in my latest order from Jakub Dvořák is a set of three cubes that share a common theme again - two of them from the fertile mind of Yavuz Demirhan and the third from Japanese puzzle designing legend Osanori Yamamoto. All three target a cube shape and each has three burr pieces to be inserted into a holey cube frame ... which almost makes it sound like they should be pretty similar - except they ain't! 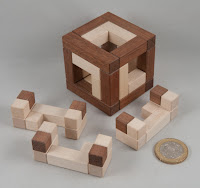 The first is called Estergon and was added to Ishino's website back in 2011. It's a 5*5*5 unit cube with three identical (save for colouring) "almost skeleton" burr pieces. Each of the burr pieces is offset into a corner of the cube faces, so you'll realise that the order / combination of the movements is going to be critical since the pieces are going to interact inside the cube.

When you start playing with this puzzle, and indeed the other two in this post, there's a lot of movement available - it just all seems to be pretty useless! In fact if you push the burr bits out to their extremities, they can almost dangle precariously, mocking you but steadfastly not coming out! 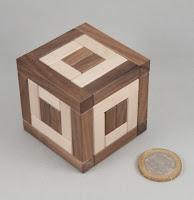 A more methodical approach will identify a couple of possibly less expected moves that then allow you to develop some space, and ultimately allow pieces to pass one another inside the cube and then let the first piece out in a mere seven moves ... albeit seven moves that eluded me for absolute ages!


Estergon 2 ramps things up a bit by moving up to a 6*6*6 cube and giving the ends of the three skeleton burr pieces a 3*3 head. That little "improvement " brings some interesting positions for the internal sticks and makes it a whole lot harder. Given the increased size of the burr bits' heads, this one's even more floppy when you start pulling the three burr pieces out, and yet you won't be able to get past the other pieces inside there ... it will certainly tease you, but it won't give its secrets away without a fight... 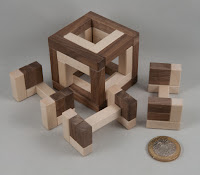 This one also took me an inordinate amount of time to work out - there are some unusual little moves and you're pretty spoilt for choice in terms of what to do along the way, so there is plenty of opportunity to wander down a blind alley along the way - or that's my excuse at least!

[A little word on the craftsmanship here: Jakub made these two at the same time and I guess he knew folks would be getting them together, seeing as how they're one and two of a set... so he resized the sticks on Estergon so that the cube was the same size even though it's a 5*5*5 cube next to Estergon 2 which is a 6*6*6 ... nice touch!] 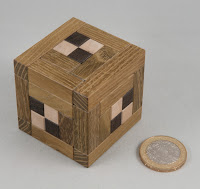 Castle Hole by Osanori Yamamoto shares some similarities with Estergon in that it's a 5*5*5 cube with three simple burr pieces running through it, but whereas Estergon has solid sides in its target state, Castle Hole has three faces with three missing cubies on each... and those little holes make all the difference. 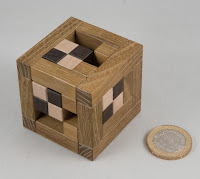 Being "just" a 5*5*5 cube, the pieces don't tend to dangle around quite as much as they do with Estergon 2, and working out where you can move the pieces using those extra little holes will yet again provide plenty of blind alleys to wander aimlessly around - ask me about them, I suspect I explored them all along the way!

In the end, there's a single, rather elegant solution to freeing up just enough space to remove the first piece in 11 moves...  a great little puzzle - really like the wood on this one. 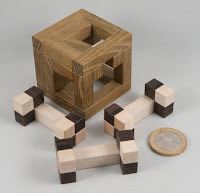