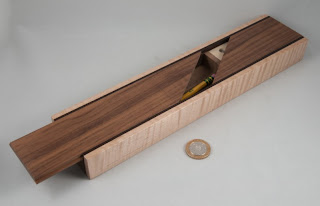 I first spotted a note about the impending #2 Pencil Case on Kagen Schaefer's website around the middle of 2011 ... at about the same time as I was ordering my Diamond Box. Kagen promised to put me down for one and said he'd be in touch when they were ready. Then things went quiet on the Pencil Case front for a while - the Diamond Box run went ahead in the interim and I've written about that one over here, and Kagen has produced some incredibly awesome pieces during that period, including the Lotus Table and the Pipe Organ Desk. If you haven't seen the video of Kagen doing a demo of how the desk works yet, you need to, now... anyway, it's not like he hasn't been busy! 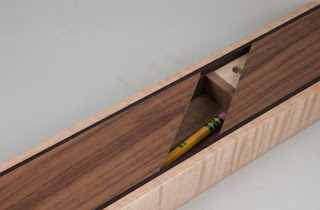 At the start of this year Kagen got back in touch and said that he was starting to get the Pencil Cases moving again so we exchanged some emails and a little PayPal and then a couple of weeks ago I received easily the best looking (#2) Pencil Case I've ever owned in my life... the curly maple literally sparkles and the finish is up to Kagen's usual levels of perfection.

It literally is a pencil case - the main part of the top panel slides down to reveal a large compartment that even comes with a complementary pencil ... you can slide that panel all the way off, but that doesn't seem all that interesting. In the top left hand corner of the large compartment there's a hole that look suspiciously like a pencil sharpener - and indeed, master Schaefer has handily built a pencil sharpener into the box for you, after all it is a pencil case! 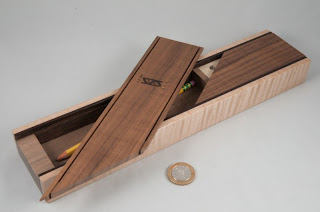 Paying closer attention to the top section of the box, you'll already have noticed that there's a fair amount of additional space up there, and if you wiggle the cover up at the top it'll move a little, but you'll correctly deduce that's it's currently locked in place... and keeping the secret compartment, err, secret!

You'll work it out eventually though, even if you aren't a puzzler! :-)

Once you get inside the secret compartment, you'll see a truly elegant mechanism - simple and extremely effective ... and all made in wood (OK, except the sharpener!). One little piece of that is really clever... you'll know which one I mean as soon as you see it! ;-)

It's a really cool puzzle box that masquerades as something quite ordinary - even useful... beautifully finished and a lovely addition to my little collection.